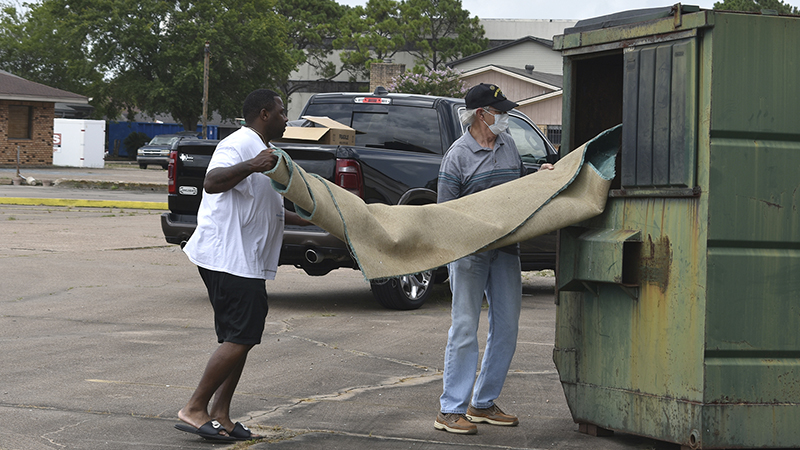 A bystander, left, stopped to help Glenn Clarey, past commander of Rudolph Lambert American Legion Post No. 7, place trash in the Post’s dumpster. Clarey said people have been dumping trash next to their dumpster. (Mary Meaux/The News)

The folks over at the Rudolph Lambert American Legion Post No. 7 were pretty mad when they pulled up earlier this week and noted someone dumped trash next to the Post’s dumpster.

All of it was thrown out next to their big green dumpster across from the American Legion Post on Memorial Boulevard.

After a Port Arthur Police officer took a formal complaint and left the scene, Clarey walked over to the pile and began placing it in the dumpster.

A bystander joined him, helping him load the carpet and other large items. 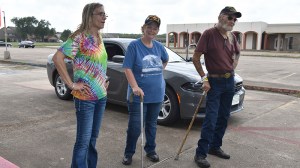 Post Commander Lucinda Clarey explained that the Post shut down in March due to COVID-19 restrictions and had not been open for long when the newest restrictions came down Friday, which shuttered bars.

The fact that the Post is temporarily shut down means loss of income on top of random people dumping their trash at the site.

“This is not the first time this as happened to us,” Clarey said. “The thing is, the veterans we have here can’t pick it up and we can’t afford security 24/7.”

Glenn and Lucinda Clarey, along with Post auxiliary member Cynthia Bailey and chaplain Robert Bailey, spoke of how difficult it is to deal with the trash, especially since some members live outside the city limits.

Lucinda Clarey said she was told by one of their bartenders that she had had to run people off who were trying to dump trash.

A large parking lot sits next to the building and across the way is a medical building that shut its doors several years ago. A few physicians and specialists are located nearby.

“I don’t understand how people can do this. These are all old people,” Cynthia Bailey said. “It hurts.”

The American Legion is dedicated to service of veterans, their families and communities, states and nation.

Its mission is to fight for veteran rights — past, present or future, according to the Legion website.