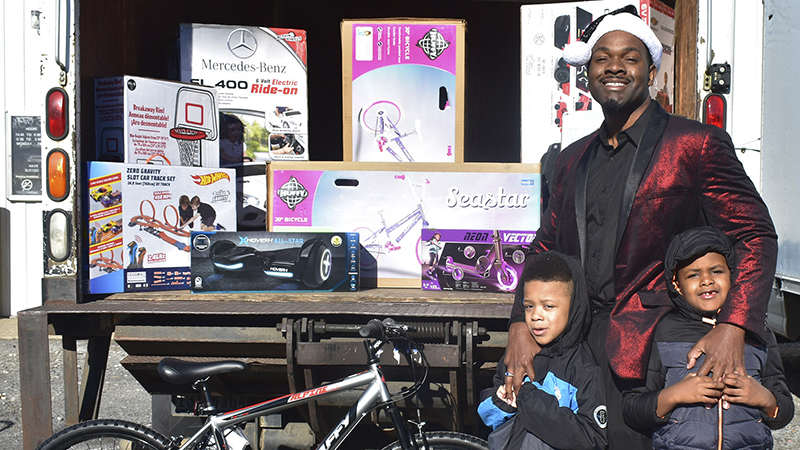 Dr. Levy Q. Barnes Jr. poses with his sons, Zachary and Levy III in front of just a few of the many gifts local children will receive during “Christmas With Dr. Levy” at the Pavilion. (I.C. Murrell/The News) 12-19-19

A police reform bill written by a Port Arthur evangelist seeks to establish federal and state law for holding peace officers responsible if a suspect in a nonviolent crime dies and the officer makes no attempt to take the suspect out of danger.

Dr. Levy Q. Barnes writes in his “Life Matters Bill” that when a peace officer or another person attempts an arrest for a nonviolent crime, lethal force should not be a first option in an arrest or search if the suspect has shown no resistance.

The bill includes 16 scenarios covering the right to breathe, endangerment of a suspect, transparency and “Lethal force for lethal force,” among other aspects.

A former candidate for U.S. representative, Barnes said he crafted the bill after reviewing laws in place across the country regarding police reform. Barnes submitted his bill to U.S. Rep. Randy Weber and State Rep. Joe Deshotel, both of whom represent Jefferson County.

“I believe if our congressmen are as serious as they say in protecting lives, not just minorities but American citizens, they will greatly help in moving our country forward,” Barnes said. “If not, it will give a message that it’s OK to kill Black people, which is what’s been going on.”

Barnes wrote the “Life Matters Bill” in the days following the May 25 fatal arrest of George Floyd while under custody by Minneapolis police. Floyd was knelt on to the neck for 8 minutes, 46 seconds, on suspicion of a counterfeit $20 bill at a nearby convenience store, and his death — which has resulted in charges against four officers —ignited ongoing worldwide outrage over racism and police brutality.

The bill, which contains more than 2,100 words, specifies protocol for each scenario each officer would be required to follow and defines charges for violations in some scenarios.

Barnes did not suggest penalties such as minimum prison terms in either scenario.

“What I don’t want to give is mandatory minimums like in the drug crimes,” Barnes said. “That might be a little too lenient, but I do know some scenarios could be accidents or whatever. Still, the officers will be responsible for the death of the suspect.”

Barnes submitted a second bill called “Second Chance” to Weber’s and Deshotel’s offices that addresses prison reform. That bill claims billions of federal and state tax dollars are being wasted on the nation’s drug war and the imprisonment of those convicted of drug charges.