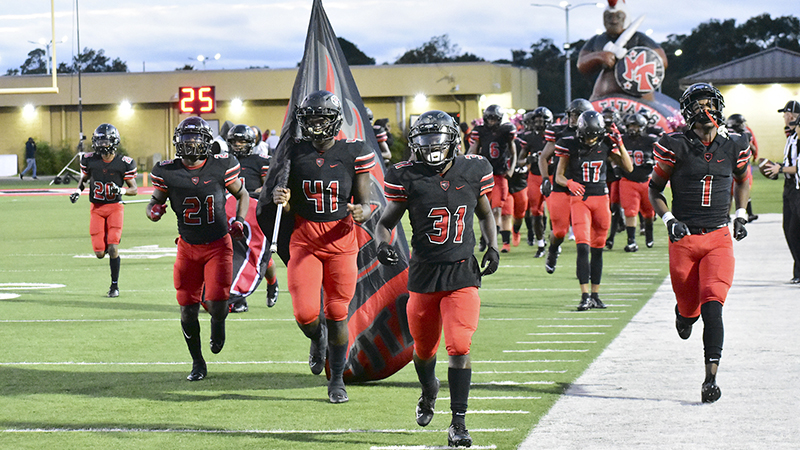 Port Arthur Independent School District officials and Memorial High School staff made the decision Tuesday morning to suspend all workout sessions for the football team for 14 days after the district announced that a football player tested positive for COVID-19.

In the meantime, Morgan is working on getting more of his players tested for COVID-19 in an effort to gather more information.

“What we’re looking at is we’re going to work on getting a sample size out of our team tested here over the next few days, and that will give us a better idea of if it’s something that’s spreading or not,” Morgan said. “We’re looking to get some people tested that necessarily may not have had a lot of contact with that young man but that are in our program.

“If we can get a good idea of if it’s spreading or if it’s just an isolated incident, we can make a more educated decision, rather than just shutting down and having another positive test in a couple of weeks.”

Morgan is working to try to get everyone in the football program tested, but is currently planning on only testing by sample sizes from the workout groups.

Morgan said no negative results would prompt him to allow some football players and staff that didn’t come into contact with the infected athlete to resume workouts. All players, whether connected to the positive result or not, will be kept away for the full 14 days.

“A lot of decisions are going to be made once these other tests are done, too,” Morgan said. “We can make some decisions on whether this is an isolated incident or if these other guys that are around him outside of football just in regular everyday life are also positive. That changes what could happen. There are so many unknowns.”

Morgan doesn’t believe the positive test result is related to the athlete that was sent home two weeks ago with a low-grade fever.

Girls basketball, soccer and volleyball suspended summer workouts until July 1 as a precaution after the athlete was found to have fever.

Morgan is still expecting to stick to the original UIL schedule for the football season, but also recognizes that new information on the COVID-19 pandemic could cause some changes.

“Will it affect football season? Who knows?” he said. “I’d like to think not. Is it going to affect it some way? I think definitely, but it might be a minor deal to where it’s just attendance, or who can come to the games, and how you travel, or something where the schedule gets changed. I’ve talked to our superintendent about it, Dr. (Mark) Porterie, and we’re going about it off an old schedule of an Aug. 3 practice and an Aug. 28 game. We’re working off that now because we haven’t been told anything differently.”

The next quarterback? Challengers, coach breakdown competition for Nederland’s…