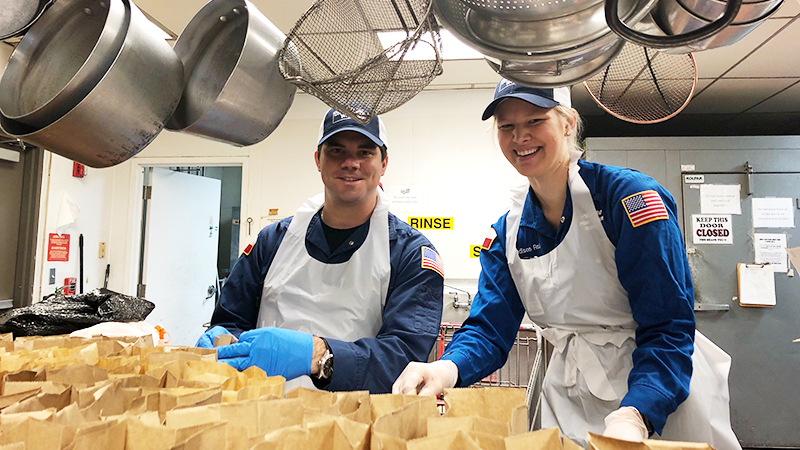 Two Industrial Partner volunteers from Valero make sack lunches for an evening meal to go at The First is Hospitality Center. (Courtesy photo)

Points of Light, the world’s largest organization dedicated to volunteer service, recognized Valero as a member of The Civic 50, a list of the 50 most community-minded companies in the United States.

The honor is a testament to Valero’s continued focus in 2019 on supporting the community and being a good neighbor through volunteerism and charitable giving, a core value that remains unchanged since Valero began in 1980.

Valero has made The Civic 50 each year since 2013, not long after the list was conceived, and again is the top energy-sector company on the list.

The Civic 50 provides a national standard for superior corporate citizenship and showcases how companies can use their time, skills and other resources to have an impact on their communities.

The recognition follows a year in which Valero’s employees and charitable organizations generated more than $64 million for worthy charities through direct and in-kind donations, fundraising and volunteerism. Notably, support continued in response to COVID-19 with more than $3 million for frontline organizations across the globe.

At the Valero Port Arthur Refinery in 2019, employees pledged $911,794 for the United Way, with other fundraising and a company match expected to total approximately $1,426,316 in United Way contributions.

“We are proud to be a part of this honor, and to be a vibrant part of this community,” said Mark Skobel, Vice President and General Manager of the Valero Port Arthur Refinery. “We will continue our legacy of support through volunteerism, charitable giving and the economic support of being a good employer.”