Judge Branick to decide Monday whether to extend facemask ordinance 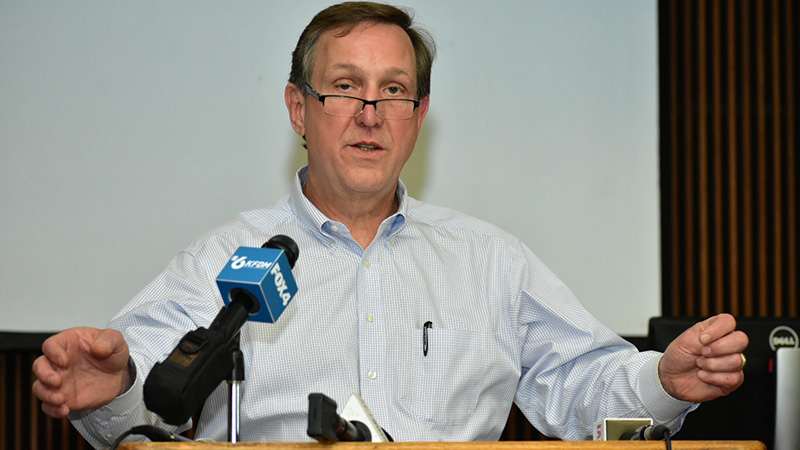 Jefferson County Judge Jeff Branick believes “the minor inconvenience” of wearing a face covering will help stem further outbreaks of coronavirus that have plagued the area in recent weeks.

Branick on Friday (June 26) addressed his latest executive order, which requires businesses to mandate that customers wear facemasks inside their establishments. The order went into effect at noon this week and expires at 11:59 p.m. June 30.

Asked whether he will extend the order or let it lapse, Branick answered: “I will make that decision Monday once I see the infection trends in the county.”

The trends have been alarming across the county. Since June 9, the total number of coronavirus cases in Port Arthur, Port Neches, Nederland and Groves has risen by 74 to 185. Port Arthur alone has 147 infections, more than double its count from June 9 (70).

Jefferson County has totaled 1,520 cases as of Friday, including 32 fatalities. Six of the deaths have occurred in Mid- and South County.

Port Arthur had gone 10 days without reporting a coronavirus infection, May 17-26.

Branick reported receiving calls and texts about businesses that have either complied with or violated his order.

“At H-E-B, everyone except those who are outside have been wearing masks,” he said. “I received several texts from those at Market Basket saying they’re wearing masks. I also got calls on businesses not complying, and I’ve made those calls to them to talk with them.”

Businesses failing to implement or enforce a policy of wearing facemasks may be fined up to $1,000 per violation. Homemade masks, scarves, bandanas or handkerchiefs are acceptable.

Individuals cannot be penalized by public entities because Branick is not granted such authority from Gov. Greg Abbott, the judge said.

Businesses in Texas operating at 25 percent of the maximum capacity were allowed to expand to 50 percent occupancy on June 3, and restaurants were given the green light to expand their occupancy to 75 percent on June 12.

Restaurants will have to drop their occupancy maximum to 50 percent on June 29.

Branick said he signed his latest mask order because he does not want to see the county or state go through another shutdown.

“I think this can all be prevented with the minor inconvenience of wearing a 6-inch by 4-inch piece of paper or cloth.”

Texas has seen a big surge in COVID-19 cases throughout the month, and on Friday Abbott issued an order limiting certain businesses and services.

Included in the order:

“Given the exposure Texas has seen recently to the coronavirus, I support the governor’s decision,” Branick said.

Abbott warned he would take further action if the positivity rate in COVID-19 tests throughout Texas rose higher than 10 percent. Texas recorded 5,996 new cases alone on Thursday (June 25) and has now seen 131,917 total cases, more than doubling its count from June 1 (64,880).

It is not clear how many throughout the state have tested for COVID-19, however.

“At this time, it is clear that the rise in cases is largely driven by certain types of activities, including Texans congregating in bars,” Abbott said. “The actions in this executive order are essential to our mission to swiftly contain this virus and protect public health. We want this to be as limited in duration as possible.”