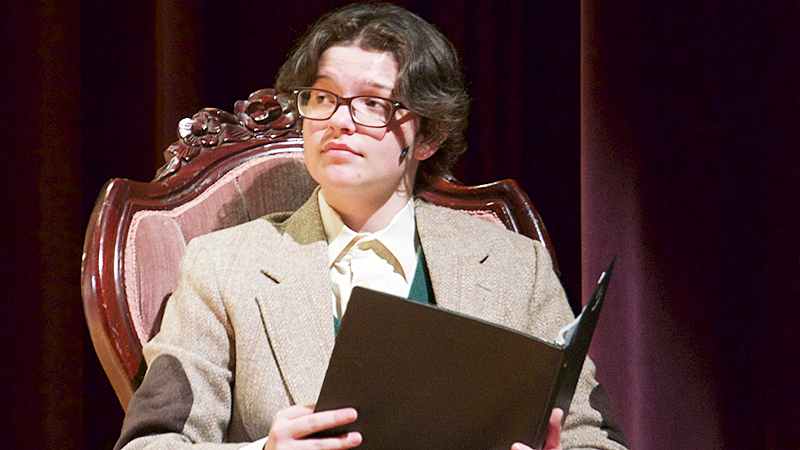 Curry, 17, received a call that changed his life in early March. He had just been accepted into the Texas State University Theatre Arts program.

“I was home alone when I got the call,” Curry said. “When I answered, I had this gut feeling something good was going to come. When I was told I was accepted, I literally ran around the house. I couldn’t stop moving. I had so much excitement and adrenaline from being accepted.”

The Bachelor of Fine Arts in Theatre, Acting, is a conservatory-style four-year training program designed to enhance the whole actor through voice, movement, speech, collaborative technique and artist-entrepreneurial skills. 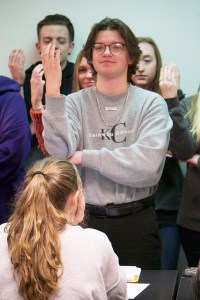 Students who apply are required to submit an application to the university with a headshot, resume, personal essay and two letters of recommendations.

A pre-screen audition video is also required with one slate and one monologue prior to an on-campus callback audition in front of directors and current students.

Out of a couple hundred applicants, Curry was one of only 16 accepted.

“Wyatt has worked really hard not only in the classroom but out of the classroom,” she said. “He seeks opportunities to enhance his skills and helps younger students along the way. He’s a great example to show what hard work can achieve.”

Curry stepped into many costumes during his time in high school in and out of school productions. 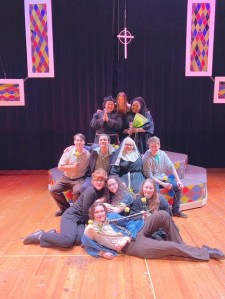 Wyatt Curry, lying front on the floor, with the cast of Sister Act.

The Port Neches native played in shows such as She Kills Monsters, Puffs and Newsies, among many others.

One of his hardest roles was playing Damis in Molière’s Tartuffe.

“I had to throw a fit on stage and be really angry, upset, whiny and hide under a tablecloth,” he said. “It was a challenge because I had to do a lot of work, but so little on stage. I had to be still and not let the actors see me, but be visible enough for the audience to see me and my reactions to Tartuffe.”

Curry’s role as Tilly in the Beaumont Community Players rendition of She Kills Monsters is one that cemented his love of acting.

“I haven’t really had many challenging roles beside the one in She Kills Monsters,” he said. “I was still a bit of a new actor and I had to learn stage combat and do a seven-minute fight scene while still acting. I also had to learn how to really act on stage. My character was complicated and had many mood swings.”

Playing Joey in PNG’s winter musical Sister Act was also one of his favorite performances.

“Joey is a member of the main antagonist’s gang, so to speak,” Curry said. “He’s a ladies man and has this plan to flirt with the nuns in order to get to the main character they were trying to kidnap. Joey was a background character, but I had so much fun interacting as a flirting, conniving little guy.”

From watching Curry over the last several years and through many productions, Eyles said she sees the young actor flourishing in the competitive world of theatre.

“Wyatt has a really strong sense of who he is and is great at using his voice to work toward what he wants,” she said. “I see him having a successful career for the rest of his life.”
Heading to San Marcos in the fall, Curry is most excited to join his future ensemble and the class of 2024.

“I know that I am going to get really close to them,” he said. “I loved my high school troupe but you do things in high school just to survive. In college you get to pick what you want to do and make friends around those interests, hobbies and careers, so I am excited to be in a theatre environment all the time.”

Curry will be required to maintain a 2.5 GPA and a minimum of 125 semester credit hours. Faculty members formally evaluate all student work annually.