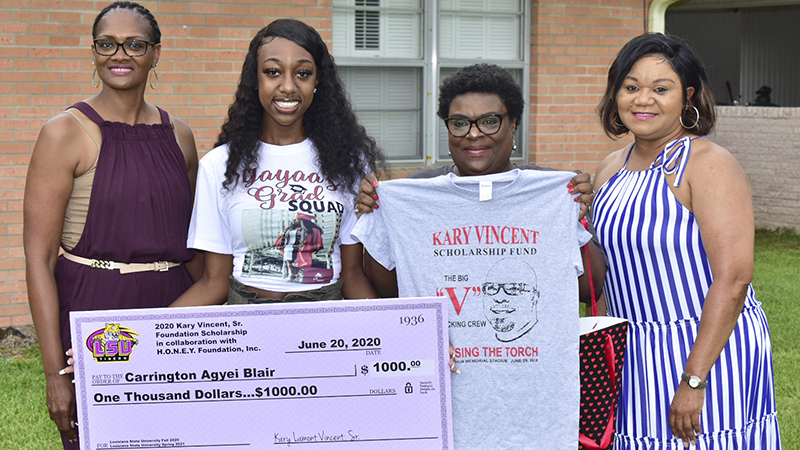 BEAUMONT — Carrington Blair of Spring once considered quitting track and field, but one of her youth league coaches inspired her to keep going.

“It was one meet I actually fell in a race and I got back up,” Blair said. “He was telling me, ‘The toughest soldiers always fall, but what makes them strong is when they get back up.’”

Those were the words Kary Vincent Sr. of Port Arthur imparted on Blair in 2018, the year Vincent died of complications from double pneumonia. Vincent coached Blair from the time she was 7 until his death, even receiving videos from Blair’s races to critique while he was hospitalized.

“KK really helped me do more than I could even imagine on the track,” Blair said.

Nearly two years after Vincent’s passing, Blair received a $1,000 scholarship award named after him. Representatives from the Kary Vincent Sr. Foundation Scholarship and the HONEY Foundation, both based in Port Arthur, presented the award to Blair on Saturday at her sister’s home.

“It means everything to me, my family not having to pay out-of-state fees and dealing with other things we have going on in the family,” said Blair, who plans to major in pre-law at Louisiana State University and walk on to the Tigers’ track team. Vincent’s son Kary Jr., a 2017 Memorial High School graduate, is a defensive back for the national championship LSU football team and runs sprints on the men’s track team.

“It’s a blessing to have received this,” said Blair, a cousin of Vincent Sr. and Jr. “I know a lot of kids worked hard just as I did, but for me to personally get this, I’m very happy and feel very blessed. … “I want to thank my family and of course give all honor and glory to God. This was really unexpected and I’m so grateful.”

Blair is the daughter of Samuel and Aerica Blair.

Aerica graduated from Lincoln High School in Port Arthur in 1988.

Precautions in light of the coronavirus pandemic cut Blair’s senior track season at Westfield High School short, but she graduated as a 400-meter district champion and three-time regional meet qualifier from previous years. Blair also was senior class president and graduated in the top 10 percent out of a class of 600.

This was the second year for the scholarship foundation, after eight $500 awards were presented in 2019. The foundation, in collaboration with the HONEY Foundation, held a football camp last year to bring attention to the scholarship program for fundraising purposes, but the camp was called off this year due to the pandemic.

“With all the COVID interruptions and the interruptions to people’s lifestyles, we knew it was something I wanted to keep going on, so we committed to the $500 per semester for one student,” said Trena Vincent Arceneaux, Vincent Sr.’s sister and founder of the scholarship fund.

Vincent Sr. exceled in track and football at Thomas Jefferson High School before his graduation in 1987 and competed in both at Texas A&M University before being drafted by the New Orleans Saints in 1992. He worked in the Port Arthur ISD for 16 years, mostly as an assistant football and track coach at Memorial, until his death on Dec. 26, 2018, at age 49.

“He is looking down and he is overjoyed that we are pushing forward,” Arceneaux said.