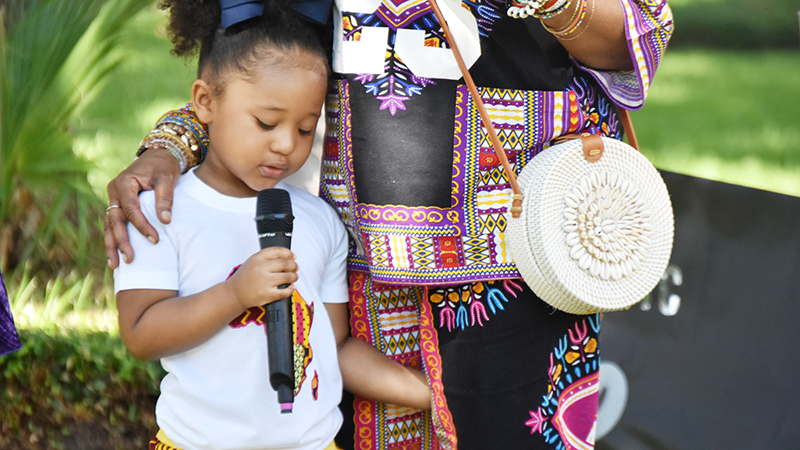 Jaxyn Yates performs “Lift Every Voice and Sing” during a Juneteenth celebration at the Port Arthur Sub-Courthouse on Friday. (Mary Meaux/The News)

On a bright Friday morning, 155 years after Texas slaves learned of the Emancipation Proclamation, a group of locals gathered in celebration, singing as two men hoisted the Juneteenth flag at the Port Arthur Sub-Courthouse. 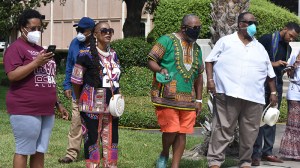 Mike Thompson, a Navy veteran, and Port Arthur resident Charles Johnson, who is a member of the Buffalo Soldiers Galveston Motorcycle Club, took part in the solemn flag raising.

Taylor Getwood, a Woodrow Wilson Early College and Memorial High School graduate, lent his voice to the celebration saying yes, African Americans are free, but there’s still a long way to go and it is important to get youths involved.

Mayor Thurman Bartie read a proclamation in honor of Juneteenth, saying it is important to create a dialogue of what Juneteenth history means for all Americans as a way for racial healing and more. 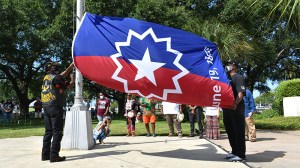 Charles Johnson, left, and Mike Thompson raise the Juneteenth flag during a celebration at the Port Arthur Sub-Courthouse on Friday.

Jefferson County Precinct 3 Commissioner Michael Shane Sinegal recalled a time when the very courthouse behind him had a designated area for “coloreds only.” This was in the 1950s and his mother was pregnant and had to use the restroom labeled for whites.

“She was bereted by a sheriff’s deputy for going to the all-whites restroom,” Sinegal said, adding one of her proudest moments was when he was elected to office 12 years ago. And now, years later Sinegal is in charge of the same building.

Getwood challenged the members of the audience to pledge to continue to educate others of Juneteenth and to make it all it should be.

Gail Pellum with the African American Cultural Society spoke of not-too-distant relatives born into slavery and of how she was instructed to tell the stories of the past so as not to be forgotten.

Pellum has played a large role in keeping the African American culture alive with various events through the years and on Friday handed the microphone over to her pre-school aged granddaughter Jaxyn Yates, who sang “Lift Every Voice and Sing.” 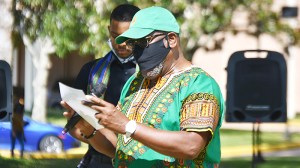 Mayor Thurman Bartie reads a proclamation during a celebration at the Port Arthur Sub-Courthouse on Friday.