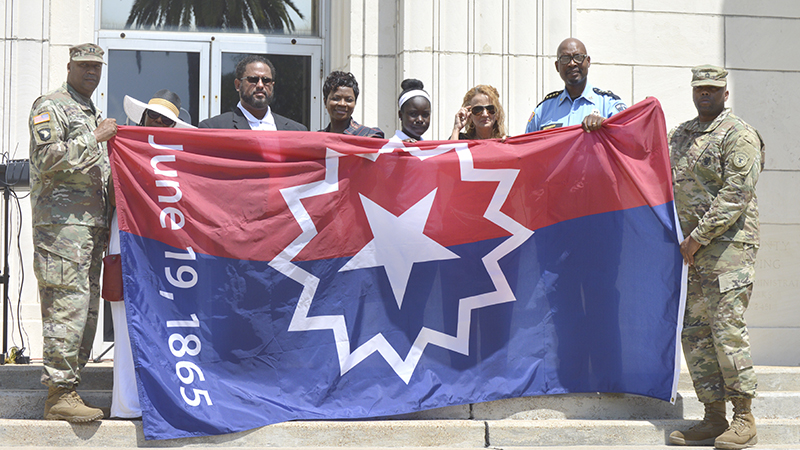 Representatives from the African American Cultural Society, Port Arthur Police, PAISD school board and the Army hold the Juneteenth flag on the steps of the Port Arthur County Courthouse in 2017. (Lorenzo Salinas/The News)

When you don’t know your history, Gail Pellum said, you’re going to repeat it.

Pellum believes the United States is going through a repeat of traumatic events affecting the black community, from acts of police brutality in Minnesota and Kentucky to hangings in California. Those acts have led to worldwide outrage against systemic racism.

“With so much going on, with the boycotts and the protests, it puts the emphasis back on Juneteenth,” Pellum said. “To me, everyone should celebrate Juneteenth, black and white. Everyone who came to this country came in search of some type of freedom.”

Pellum is president of the African American Cultural Society in Port Arthur, which is teaming with the Port Arthur NAACP, KLV Ventures and the Port Arthur Complete Count Committee for the Juneteenth Celebration on the Circle on Friday (June 19).

Juneteenth is an unofficial national holiday (but official in Texas) commemorating June 19, 1865, the day Union Army Gen. Gordon Granger went to Galveston to announce the end of the Civil War and informed slaves that they were free, although the Emancipation Proclamation went into effect on Jan. 1, 1863.

“Juneteenth is a very historical month,” Pellum said. “It says a whole lot about America. I can’t believe we ignore it.”

She doesn’t want ignorance to be the case this time around, even as America fights a health pandemic.

“Juneteenth is a big thing for me,” Pellum said. “I would love to see us embrace it more and give it the recognition it deserves.”

Friday’s Juneteenth activities include a flag raising at 10 a.m. at the Jefferson County Sub-Courthouse at 525 Lakeshore Dr.

The 2020 Census Partnership Specialists will be there as well to encourage self-response and provide helpful information to increase the population count in Port Arthur.

Holidays like Juneteenth are not documented in history books like others, Port Arthur librarian Carolyn Thibodeaux said. She’s helping with Pellum and others in organizing local Juneteenth festivities.

“It’s the history of our DNA as African Americans, but people don’t take time to study it,” Thibodeaux said. “This is why I got involved, helping Gail with this. We have to open up the eyes of the younger generation and teach them how to generate change.”