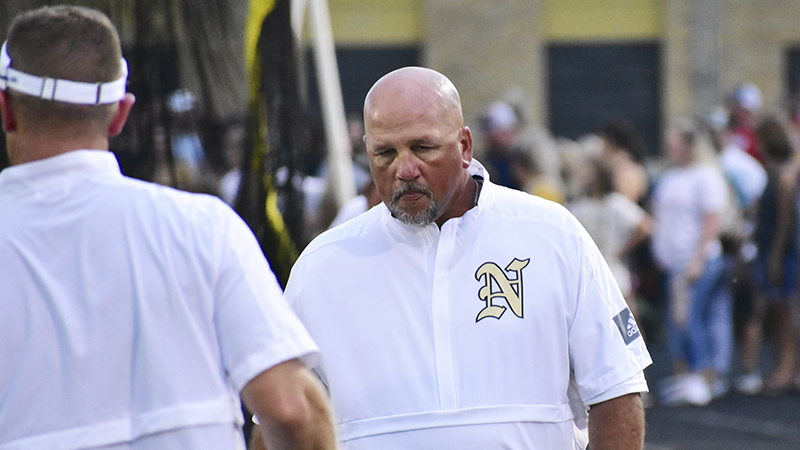 Coach Monte Barrow, pictured before an Aug. 30, 2019, game against West Orange-Stark, has the Nederland Bulldogs back in team workouts. (I.C. Murrell/The News)

Junior outside linebacker Jaice Beck said it’s amazing being back out on the practice field with his fellow Nederland players and coaches.

“I’ve been waiting for two months to get back out here,” he said.

Tuesday was the third day the Bulldogs football program held practices and conditioning sessions at the high school campus since the University Interscholastic League allowed practices to resume on June 8, provided Texas schools abide by requirements meant to hold back the spread of COVID-19.

It was out of concern for COVID-19 that the Bulldogs refrained from practicing the previous week beyond Monday. Head coach Monte Barrow said one of his players had a family member who tested positive for the virus. Barrow held back on practicing further until the player himself was tested. He did not reveal the player’s name. The player’s test came back negative on Monday.

“We stopped workouts until we got his tests back, but he’s still 14 days self-quarantined just because it’s his family member,” Barrow said. “We started back yesterday but he did not.”

Health and safety are still the top priority for Barrow and his coaches.

“We did a phone check before that first date,” Barrow said. “Each coach had a list to call kids, asking them their symptoms on the sheet, making sure they haven’t exhibited any of those, and if they do or any family members do, if there’s any doubt in their mind, we want them to err on the side of caution and stay home.

“They’re doing a great job. They’re calling, letting us know why they can’t be here. I don’t think any of it has been yet because anyone is feeling bad. We’re fortunate for that. No. 1 is health for anybody.”

Even so, restrictions are still in place for how many players can practice together. For Beck, that means his fellow linebackers and defensive backs can’t run their routes. Simply being back with his team is the best part of returning, though.

Beck, like a few others, has been doing what he can on his own to stay in shape.

“As soon as the gyms opened back up, I got a membership at Exygon,” he said. “Before that, all of us came out here, flipping tires, running, doing seven-on-seven stuff.”

Senior running back Josh Mazyck has been doing the same.

“I feel like I never left, because during the whole quarantine there were a couple of us guys out here every day throwing the ball, working on our routes, our hands and everything,” Mazyck said. “It kept us in some shape, minus the weight room. I mean when we could work out we could work out, but other than that we were at the field.

With the team back together, even limited as they are, Mazyck and other team leaders will now get the chance to help younger players learn the ropes.

“We could work with the younger guys, show them some new plays,” he said. “We see people conditioning and getting back in shape, working with our quarterback and everything, working on hand-eye coordination. We kind of got a young team, so it’s a lot they still have to learn, but I feel like they’ll learn it though.”

Barrow says he’s seen more underclassmen step up in the past few years.

“I told them yesterday [Monday], we’ve had more freshmen in the last three years contribute on varsity than we’ve had in the 28 years total I’ve been here,” he said. “We had some young guys that were good players, and age is not going to be a limit on what they can do. We tell them that all the time. There are some young guys that are going to need to step up, and it’s good that Josh, one of our leaders, recognizes that. It’s up to him and the other leaders to get these guys along in the right way.”

Beck and Mazyck agree the team still has a ways to go before all players get into playing shape.

“We have a long way,” Beck said. “We have to establish leaders before we become a team.”

“Missing those three months in the spring didn’t help us by any means, but we’re not going to use that as a crutch,” he said. “When UIL says it’s the first day we’re playing, we’re going to line up and play. We’re going to have 11 guys on the field and we’re going to do our best to get them ready. They’ll do their best to be ready.”