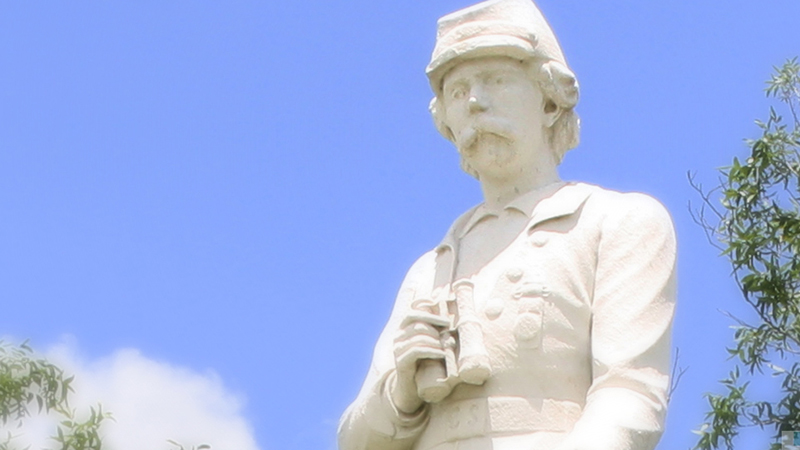 The issue of a statue of Dick Dowling being sent to the Sabine Pass Battleground State Historic Site has been tabled, so to speak.

The Texas Historical Commission was set to discuss acceptance of a Civil War statue that was donated by Houston Mayor Sylvester Turner, but the issue has been removed from the THC agenda for its Tuesday and Wednesday meetings, said Chris Florence, communications director/information officer.

The acceptance of the statue was a step in relocating the statue to Sabine Pass, where a statue of Dowling already stands. The park also has an interpretive pavilion and a monument that lists Union causalities from the Battle of Sabine Pass as well as telling the story of the battle.

Mary Benton, director of communications for Turner’s office, said the statue is set to come down this week.

District 22 State Rep. Joe Deshotel, D-Beaumont, said based on what he heard, the statue will be placed in storage in Houston.

“It is my understanding the statue would not be coming to Jefferson County,” Deshotel said.

Deshotel previously spoke with Turner and expressed dissatisfaction at the proposed move.

Port Arthur Mayor Thurman Bartie also heard the statue would be placed in storage in Houston and not come to Port Arthur.

Bartie is prepared to travel to Austin to meet with members of the Texas Historical Commission regarding the issue.

“And ask them to consider not adding (the statue) to what is already out here in Port Arthur, even though we removed his (Dowling) name from the school,” Bartie said.

In 2018, trustees with the Port Arthur Independent School District removed the name of Dick Dowling and Robert E. Lee from its schools.

Bartie said he is not advocating the removal of the current statue of Dowling in Sabine Pass but does not want to add to it during this time of civil unrest in the nation.

On June 11, Turner announced plans to relocate the Dowling and Spirit of Confederacy statues, both of which are located in Houston city parks. The statues are to be removed by Friday (June 19) in commemoration of the Juneteenth holiday, which memorializes the day slaves in Texas learned the Emancipation Proclamation granted their freedom.

A task force recommended the moving of the statues from Houston. The Spirit of the Confederacy statue will be moved to the Houston Museum of African American Culture in the Museum District.