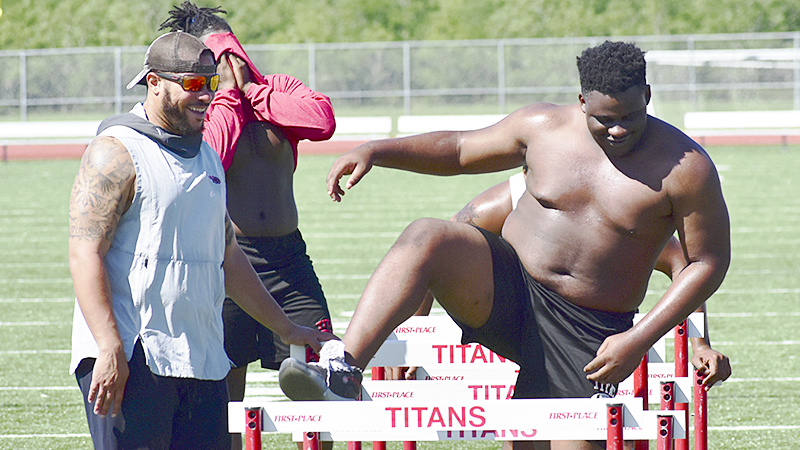 The coronavirus pandemic never did a thing to stop the grind of the football offseason, Memorial running back Branden Chaney said.

It has changed how the offseason unfolds from previous years.

This week, though, is the first week high school football teams in the state returned to outdoor and indoor drills following nearly three months of preventative measures against COVID-19. That means teams that normally hold contact drills during the spring semester such as Memorial have to wait until preseason camp opens in August.

That does not overly concern third-year head coach Brian Morgan.

“We had a young team last year, so we have a lot of guys returning,” Morgan said. “It’s not a situation of trying to teach a lot of new guys, a lot of young guys. Football’s important to them, and they took a lot of time through online means to learn throughout this quarantine.”

The Titans posted a 5-6 record in 2019 with a young roster, especially at skill positions, and were fourth in District 9-5A Division I at 4-3. Port Arthur’s team will begin the season Aug. 28 at Prairie View A&M University against Lancaster, a team that went to the region championship round of the UIL playoffs last fall.

“Last year youth served us well,” Morgan said. “Sometimes you take some lumps because of it and you make some mistakes in games.”

Highly recruited junior cornerback Jaylon Guilbeau is a part of the youth movement happy to be back on the practice field.

“It’s kind of hard because we’re so used to being close together, and we’re a family,” he said. “We’ve got to social distance. We’ve got to work when we can in order to be ready.”

Even with summer workouts underway, the precautions have not stopped.

Indoor workouts can be held at up to 25 percent occupancy until June 22, when the maximum will be increased to 50 percent. Outdoors, student-athletes are placed in working groups no larger than 15 total students.

But that’s not all.