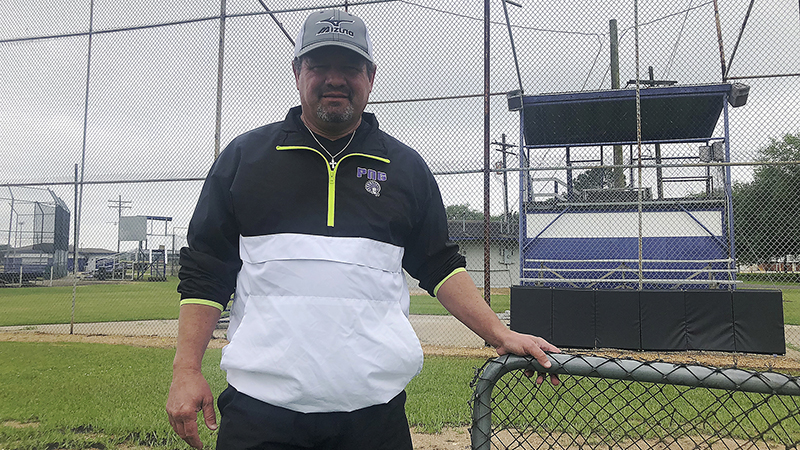 Bobby Chaisson stands in the select baseball field nearby the Little League fields in Port Neches. The field is undergoing much needed renovations, including the installation of turf. (Brad Robichaux/The News)

(Editor’s note: This story originally appeared in the May/June edition of Greater Port Arthur The Magazine. The next edition will be available in July.)

That doesn’t mean his teams aren’t going to try to win.

“I got into it because I played sports all my life,” Chaisson said. “I was coached by my dad and my brother, who were big influences on me as a coach. I just love being around the kids, and I’m the type of coach that tells them we’re here to have fun, that’s No. 1, but we do play to win when we cross the white line. That’s part of the game and everybody’s got to understand that.”

The longtime coach with Port Neches Little League has a long history of athletic achievements from the teams he’s coached, as well as his dedication to preserving Little League and select baseball for the community of Port Neches.

For Chaisson, baseball is a through line from his own youth playing the sport to the experience of his children as he coached their Little League teams to deep runs in state tournaments.

He joined the board of the Port Neches Little League in 2008, when his youngest son was 4 years old. For 10 years Chaisson put in the work as a coach and a steward of the baseball institution.

The teams he’s coached are put together like families, ones that are supportive of each teammate, celebrating their victories and sharing their struggles. The key is fostering respect.

“The big thing I try to do, with every team I’ve ever coached, from the Day One when I talk to the kids, is we’re going to become a family,” Chaisson said. “I try to create a family orientation for that year, with that team, and what happens with that is they gain respect for each other. I never have kids going at each other and making light or fun of a kid that’s not as good as another.”
He makes sure parents fully understand his coaching philosophy, and that he’s going to put players in the positions where they are best able to succeed. Communicating with parents has allowed him to avoid a good deal of drama, he says.

“The parents know from Day One that pretty much I’m the coach,” he said.
“If they want to be the coach, they can take the whistle that day, and I set that tone and never really had parent issues. I’ve had great parents and great kids. I’ve been grateful to coach for many years.”

Chaisson works with other longtime assistant coaches Rodney Scroggs and Kevin Schexnayder. All three have put in many hours of time and a good deal of love for the game.

Part of that time has been spent volunteering as coaches for select teams intended to nurture higher levels of skill in baseball.

Chaisson and assistant coaches Chris Faulk and Sean Landry chose from among their community’s 7-year-old boys, many of whom haven’t learned anything about baseball yet, to join their select PNG Tribe team.

“We started a little team and we coached them,” Chaisson said. “The goal was to play little league with that group. Whoever makes All-Stars makes All-Stars, and they’ll make a run for the Little League World Series.”

Many of the Port Neches Little League teams have made it to state-level tournaments. The 14-year-old group in 2017 also played in the state championship and lost to Post Oak Little League. The under-14 team went 11-2 that season and was ranked 17th in the nation among Little League teams, out of nearly 7,000 teams, Chaisson said.

Not every youth baseball player is willing to put in the extra time on a select team, Chaisson said, and that’s fine. Select teams are capable of keeping a greater focus on competition, while little league teams are community institutions.

“It’s not for everybody,” he said. “Some parents don’t want to do all the traveling, play baseball on weekends and try to do little league at the same time. It’s cumbersome, because you’ll play two little league games during the week, and if you make a run to the championships on the weekends, you could play six or seven games on a weekend. So you’ve got to manage that with the kids and the pitch count so we don’t hurt anybody’s arms.”

While a member of the Port Neches Little League board, Chaisson directed his focus on the deteriorating state of the Little League fields near the Port Neches library. His approach during those years was to foster a better relationship with the City of Port Neches in an effort to acquire $30,000 in grant funding for repairs to make the facilities safer.

New utility and lighting poles, as well as new electrical boxes, are some of the fruits of those improvement efforts. The Port Neches Little League is in the process of pouring new concrete at the fields, as well.

“We had to understand exactly how to start fundraising and raising money, which we did,” Chaisson said. “When it’s left to the next group, there’s always money left behind in the bank, which is always good.

“I’ve always told them, ‘You’ve got to have a vision for the next 10 years. You can’t just look at it for that year, even though you’re managing that year. Our vision is for the next 10.”

The relationships Chaisson built with the city paid off in another big way.

Chaisson connected city officials with Southeast Texas Mizuno Baseball owner Brian Cansler, who offered to take a dilapidated field that hadn’t been used for 10 years next to the little league fields and turn it into a field worthy of select baseball tournaments.

With the lease, Cansler has already begun putting in a turf field and expects to be able to host up to 12 select tournaments with the new facilities, which means more revenue for the city.

“It’ll bring another style of baseball to the city,” Chaisson said. “Instead of having to go to Ford Park, you can go right here to this field and watch baseball. The other big key is that this field was used by PNG for their sophomore and JV team practice, and it was never in very good shape. PNG now has another turf field for their younger group to practice on.”

Now that his children have aged out of Little League, Chaisson has stepped away from the program, hoping to be able to spend more time with his family.

“I almost stayed, and now my kids are gone,” he said. “Most board members, their kids are there. The big thing was time away from my family for the 10 years I did it. My son’s playing high school baseball now, I’ve done my share of board membership and coaching. It was time just to walk away.”