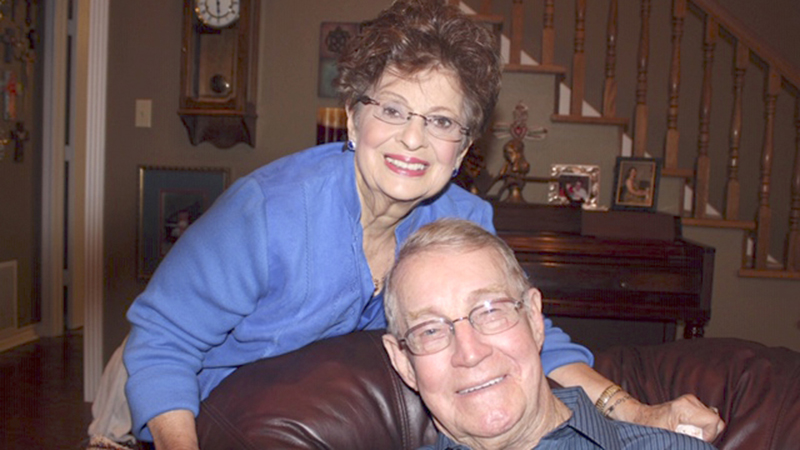 Louis moved to Port Acres as a teenager and first spotted the cute neighbor girl that he ended up marrying in June 1953.

After serving four years in the Air Force in Bryan, Texas, Louis returned to Port Acres with Barbara to raise their family of four daughters.

Their Catholic faith was the foundation of their home.

They were members of the same church, which they dearly loved, for 67 years.

Louis worked at Quantum Chemical (and predecessors) for over thirty years, retiring as a supervisor in 1987.

Barbara was a “stay-at-home” mom before running for office in May 1982, when she defeated seven opponents without a runoff to become a Justice of the Peace in Jefferson County.

She held that position until her official retirement in 1994; over the years, she married hundreds of people, went on countless inquests, counseled citizens, and made many judgments in her court.

Louis and Barbara shared a love of the outdoors and enjoyed spending time with friends and family at their deer leases and lake house.

Thanksgivings were often spent with the family at the deer lease, while Fourth of Julys were celebrated at the lake house.

Between deer hunting, four-wheeling, fishing, jet skiing, and more, Louis and Barbara taught their children and grandchildren the joys of the outdoors and of family.

Louis and Barbara were preceded in death by their parents (C.E. and Nelle Dorman, J.C. and Ginny Broussard, and Bernice and Martin Trahan), their siblings (Clarence Dorman, Jr. and Donnie Broussard), and their oldest grandson, Jayce Louis Drake.

They are also survived by eight great-grandchildren, with baby McCabe due in July.

Because of COVID restrictions and concern for safety, it will be a private family service.

The family invites all to watch online at https://littleflowerpa.org/.

It will also be streamed in the Little Flower parish hall for those who wish to view it there.

Masks will be required and social distancing guidelines followed in the church as well as the hall.

Burial will follow at Greenlawn Memorial Park in Groves, Texas and social distancing rules must be followed there as well.

Memorial contributions may be made to St. Therese, the Little Flower of Jesus Catholic Church (6412 Garnet Avenue, Port Arthur, TX 77640) or the Society of St. Vincent de Paul in memory of the Dormans.