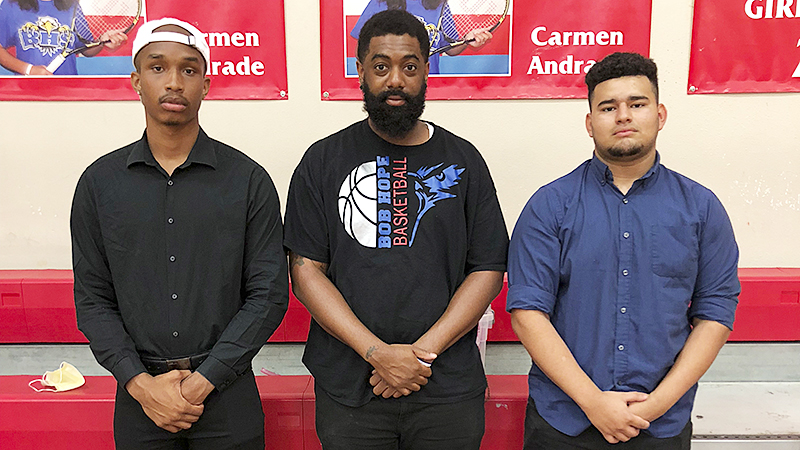 Aidyn Green and Jose Martinez came to basketball with a little hesitation. Now, they’re sticking with the sport because each earned the opportunity to play at the college level.

The Bob Hope High School seniors are graduating with opportunities to play for Division III schools in Massachusetts. Aidyn is heading to Lesley University in Cambridge and Jose will play for Dean College in Franklin.

Athletic scholarships are not awarded in NCAA Division III.

“It’s been a rollercoaster, throughout everything,” Green said. “I feel like the coaches helped us grow the most with their guidance on and off the court. It’s just been amazing with the practices, them showing you every detail of what to do, defensively and offensively, it’s been a great time.”
Martinez agreed with Green that his experience playing varsity basketball with Bob Hope has been a rollercoaster, but one that has left him better skilled.

“It was a great experience,” Jose said. “Like Aidyn, said it was like a rollercoaster ride, up and down, up and down. After this season we finally stayed up at the peak, sort of. We played our hearts out this year.

“For Aidyn and Jose, it’s confidence, knowing how to make mistakes on the court and then coming back from them and doing what you need to do,” Gilford said. “That was the biggest thing from them, having that confidence in yourself, not only just outside, but on the court knowing you can do what you need to do to help the team win.”
Aidyn had played football before, but Bob Hope didn’t have a football program. It was his barber that put in him the spark to give basketball a try two years ago.

“In the beginning, when I first started I was shy and didn’t want to play, but one day I went to my barber shop and we were all talking about sports. My barber asked me what sports I played. I said I used to play football but didn’t play any now. He was the one who really put that spark in me to play basketball. Once I got into it, my coaches gave me the guidance and the foundation that I needed to grow.”

Green averaged 6.6 points per game and 14.5 rebounds per game his senior season. He posted a double-double for five games during the season.

“Aidyn was a double-double machine,” Gilford said. “He was No. 33 in the nation as far as rebounding, with 15 rebounds a game. He’s crazy as a rebounder and defensively, it was second to none.”
Green expects to take his defensive qualities to Lesley, where he’s going to study biology in his pursuit of his interest in medicine.

“I’ve kept in touch with the coach, and he said it’s a pretty good community to be in,” Aidyn said. “All the teachers, their students, and they’re willing to help you with just about anything. I’m really looking forward to seeing the basketball team and helping them improve.”

Like Green, Martinez came to basketball once he was no longer able to play his first sport. For him, it was soccer.

“When I first came here to Bob Hope, it was sixth grade,” Jose said. “I was a soccer guy, basically, and once I got here to the middle school soccer team, they didn’t have it anymore. My friends and parents encouraged me that if I wanted to continue playing sports, just go for basketball. Once I got into it, I really loved it. I started playing in eighth grade and really enjoyed every second of it. Ever since it just holds a special place in my heart.”

Martinez averaged 1.7 points and 4.6 rebounds per game his senior year.

Martinez is looking forward to playing at the next level, and he’ll bring Dean College good passing, great court vision and a good all-around game. He’ll be studying business management.

In the meantime, Martinez and Green will be working jobs and practicing daily to get ready for what they will be facing in the fall.

Gilford is proud of the hard work his players have accomplished at Bob Hope.

“When I first got here two years ago, I told both of those guys if you work hard I’m going to find you a scholarship, whether it’s Division I all the way to JUCO,” Gilford said. “That was my mission for those two guys, and they worked hard doing what they needed to do training hard. I reached out to different coaches and found coaches willing to take a chance on those two guys.”