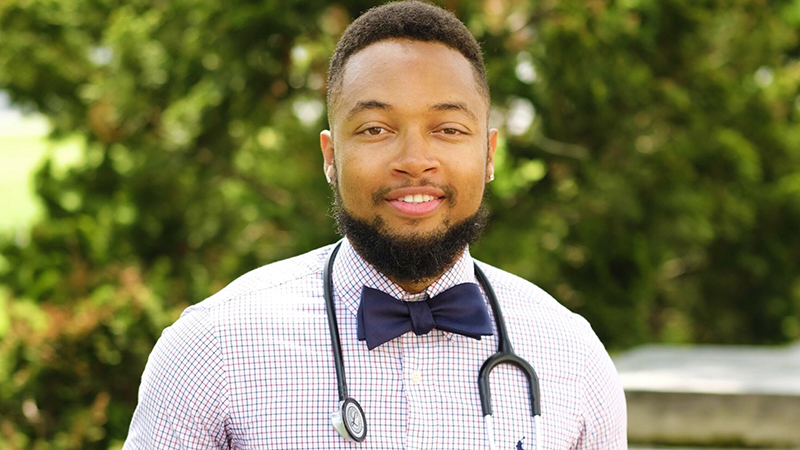 When George Romar was in school in Port Arthur he made the mistake of turning in homework that had spaghetti sauce stains on it courtesy of dinner the night before.

His English teacher at the time, Dr. Mark Porterie, who later became district superintendent, told Romar he was not allowed to submit mediocre work again.

“I didn’t even know what mediocre meant,” Romar told me, recalling the 15-year-old story. “It sounded so terrible, and I remember looking it up later and learning the definition of sub-par, sub-standard and below the level that I should be. Ever since then, I have associated the word mediocre with spaghetti sauce.”

It’s safe to say nothing about Romar’s work has been mediocre since.

He graduated as the salutatorian of the Memorial High School Class of 2008.

He attended Rice University in Houston on a pre-medicine tract, did research in evolutionary biology and graduated in 2014. After graduating he worked for a year as a research associate.

He also spent a summer semester at Lamar Institute of Technology in the emergency technician program and got certified as an EMT basic. The experiences during that time proved very powerful.

“We reported to a hotel where someone had an overdose, was not responsive and found without a pulse,” Romar remembers. “I did the compressions and after a minute or so we got the pulse back. The person survived. That experience and others had a powerful effect on me. I could see myself working with people. I decided to go the medicine route and apply to medical school.”

He ultimately applied and submitted applications to a dozen medical schools. It’s very competitive and not uncommon for people to apply to more than 20 schools.

Romar was accepted to Harvard. However, his family was rooting for Baylor to keep him close to home. Yet, he was impressed by how welcoming the Harvard community was.

“I went to a show that first-year students put on for perspective students,” he said. “They did a phenomenal job and they are super talented. We had time to chat with each other and I was really impressed by them. A lot of people I got along with pretty well right away. Each medical school has a Facebook group for accepted students. The students were so excited about their classmates, taking photos of our revisits again. I didn’t have that experience anywhere else. It was immediately a community there.

“The opportunities from Harvard are unrivaled.”

Romar was interested in a lot of pursuits, keeping an open mind throughout his time in medical school. He ended up responding to a request seeking dermatology research.

It was a fortuitous move as it connected Romar with a mentor and his eventual field of pursuit.

He graduated this year from Harvard Medical School with honors and is now pursuing his dermatology career with a 1-year residency at Baylor Medical in Houston, starting this month. Three years of advanced dermatology training and research is planned after that at Albert Einstein College of Medicine in New York City.

Although he still has a lot of work ahead of him, Romar has come a long way since his school days in Port Arthur.

“I was so lucky to have people who encouraged my curiosity,” he said. “At Memorial I had never heard of Rice until I was challenged to see it. That happened over and over again from teachers and mentors recognizing my curiosity. If it weren’t for them, I am 100 percent sure I wouldn’t be here.”

Romar stressed that young students should seek out mentors and the fields they are interested in while exposing themselves to strong writing.

He said effectively communicating in writing served him the most.

“Expose yourself to wide varieties in writing, from novels to technical writing you find in legal decisions and research papers,” Romar said. “It informs you about what good writing looks like.”