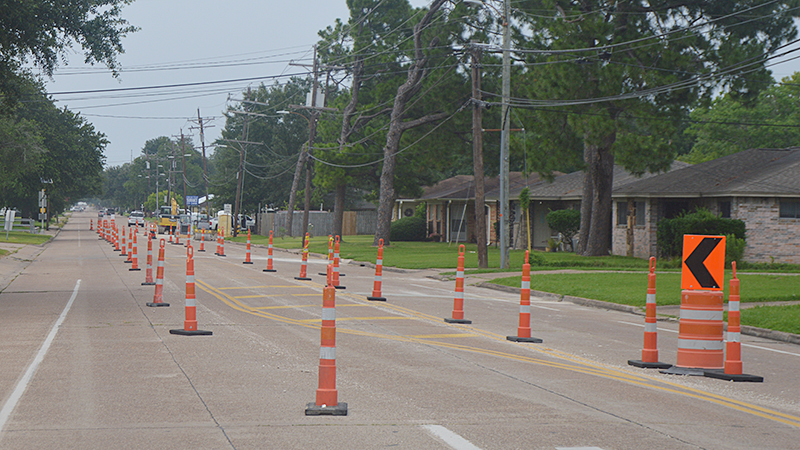 Street maintenance/repairs is a main priority for the City of Nederland.

This year, the City budgeted more than $3.5 million for street repairs; several of these projects are now under construction. This large investment is possible due to the Street Sales Tax.

Following the loss of Wal-Mart in 2002 and the associated sales tax revenue, the City was only able to allocate between $150,000 to $200,000 a year for street maintenance. The City of Nederland has approximately 184 miles of streets and roadways.

This allocation was not sufficient to prevent deterioration or fund costly rebuilds, which resulted in the poor condition of many City streets.

After careful consideration in 2007, the Nederland City Council decided to place this issue on the ballot in order to provide timely and cost-effective rehabilitation and preventive maintenance of existing public streets within the city limits of Nederland.

In November 2007, Nederland voters went to the polls and approved the street sales tax for street maintenance as a new funding source for ongoing street repair and maintenance.

This fiscal year, the City has programmed over $3 million in street projects.

The 2020 Asphalt Street Rehabilitation project was awarded to Gulf Coast, a CRH Company in the amount of $971,972.40 ($61,735 of this amount is allocated for the re-surfacing of the Senior Citizen Center parking lot).

The contractor began work in May, and the work on Detroit Avenue and South 2nd Street is completed.

The 2020 Concrete Street Rehabilitation project was awarded to Brystar Contracting, Inc. in the amount of $558,976.

The following areas are included in the project: segments of Helena Avenue between 27th Street and Twin City Highway and 27th Street in front of C.O. Wilson Middle School. The contractor began work in May and is making good progress on 27th Street.

In addition, the City plans to award bid at its next City Council meeting for the Bourque Road and Hodgson Road Reconstruction project. These streets serve a number of industrial businesses with potential for future economic development or expansion in the area; the current roads are chip seal roads and will be reconstructed as concrete streets to handle the heavy truck traffic.

Finally, the City has allocated approximately $128,600 for street/pavement markings on various City streets.

Annually, the Streets Department staff assesses the City roads and streets to prioritize recommendations for the following summer’s road work. The recommendation is presented to the City Council at a Streets Workshop for approval.

The street repair priority has been major thoroughfares, heavily traveled streets, streets by schools, etc., but recent street projects have begun to include neighborhood streets. Once the street projects are selected, an engineering firm is engaged to prepare the bid specifications and plans.

The years of minimal streets repair due to loss of revenue impacting the streets budget resulted in the condition of our streets.

The Street Sales Tax provides the revenue necessary to tackle the issue, but this is a long-term process. The City is committed to this effort.

If citizens would like the City to look at a street for repairs, please contact the City Manager’s Office at 409-723-1503.

Chris Duque is city manager for Nederland. He can be reached at CDuque@ci.nederland.tx.us.