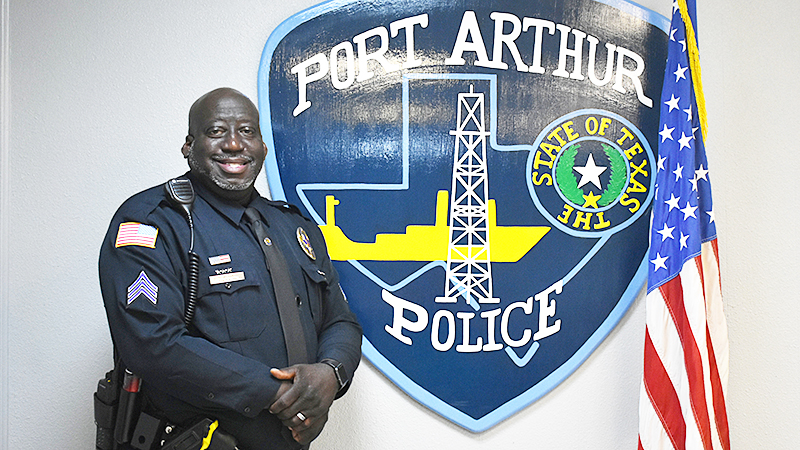 For Sgt. John H. Fontenette, faith is a big part of being a police officer.

Those two worlds don’t always meet. As a pastor he’s not always able to meet the people he meets as an officer.

Fontenette has seen people who are destitute or their lives are in disarray and given them words to empower them to come through. Some do, some don’t, he said.

Fontenette has arrested people who have later thanked and wrote him, saying the arrest made it easier to deal with whatever problem it was behind the crime that led to the arrest.

“They have said, ‘You spoke to me like I’m somebody,’” he said of treating people the right way.

Fontenette is a sergeant on the evening patrol shift from 2:30 p.m. to 12:30 a.m. His duty is to make sure the officers under him have all of the supplies and tools needed to effectively do their jobs.

The evening shift is typically the busiest and a time when the city has the most people. Refinery workers are getting off work and coming into Port Arthur from jobs outside the city, and those who work outside the city are coming home. Even as a supervisor, if it gets too busy, he will start answering calls.

Fontenette is a 1987 graduate of Lincoln High School, where teachers were tough but caring and made sure each student walked across that stage at graduation. His classmates were more like family than just people one attended school with.

He served three years in the U.S. Navy on active duty during Operation Desert Shield and Desert Storm and served on a submarine rescue ship. He was stationed in Groton, Connecticut; was at the Suez Canal; in Israel and served at Guantanamo Bay, Cuba, also known as Gitmo.

Then there was the seven plus years as a postal worker, but there was still a longing for something else. He received a call from God and started preaching in 1992 at a church on Woodworth and 10th Street. During that time, he grew in the ministry and the love of God was impressed on his heart.

He and wife Melissa started a ministry out of their home that grew to Rhema Ministries.

It was members of his church who encouraged him to follow his lifelong dream of being a police officer, so he stepped out in faith.
He enrolled in what was the Boot Strap Program, where his tuition to the police academy was paid. He graduated in May 2004 and started at the PAPD in January 2005.

Last April, he was promoted to the rank of sergeant. He is also a K9 officer with partner Reus, a Belgian Malinois.

A red and white lapel pin on his uniform tells of another story of his career that can be tied to his faith — a life-saving commendation.

“I don’t like to talk about it,” he said of the January 2006 event. “I was driving through Port Arthur Park Apartments on Jefferson Drive and looked up and saw flames coming out from an upstairs apartment. Nobody had noticed. I stopped the car, called dispatch and went and banged on the door. Nobody answered.”

He began knocking on doors and getting people out of their apartments. Before the fire department arrived, he kicked in the door to the apartment, where the fire was showing. A woman was inside, unconscious.

Fontenette became overcome with smoke as firefighters arrived, and firefighters were able to get the woman out and administer CPR. She survived.

Fontenette has ministered to fellow officers.

“In some cases it deals with their personal life and with some their professional life,” he said. “I give them what I can to come through something or give them a listening ear and if it’s OK, pray with them or let them know I’m praying for them. Anything said to me is strictly confidential. It has to be.”

Officers see people at their best and at their worst. They see atrocities enacted upon others, car wrecks, accidents and more.

“You have to be careful not to become numb,” he said. “Every major incident impacts us, especially with kids and our elders, when harm comes to them or death. You have to handle it. In the end it’s not about anything else. We are here for the people.”

PAPD Chief Tim Duriso said Fontenette, as supervisor of the evening shift, is one of the leaders. He also lauded Fontenette’s skill as a K9 officer.

“It’s always good to have somebody like that with those credentials to work at your police department,” Duriso said. “A religious man, a military veteran, a K9 handler and a supervisor.”

Thoughts on the death of George Floyd

George Floyd, the 46-year-old black man who was killed after white Minneapolis officer Derek Chauvin knelt on his neck, has resulted in nationwide protests, some peaceful, some violent leaving some officers as the target of hate.

Fontenette, who is a black officer, still hasn’t viewed the cell phone video showing the death, but has seen the still photos.

“As an officer, I’m not happy at all. I don’t like the fact that it happened,” Fontenette said. “It hurts me as an officer to see the atrocities that occurred and as a result it has caused a great deal nationwide. What they (Chauvin and other officers involved in the killing) did not only affects Minnesota. The impact it has had on us and our job and how police officers are to be trusted. Now, when we go to help, they (public) may not see that. They will see George Floyd.”

He believes there needs to be a hard conversation to address the issues.

Martin Luther King Jr. said a riot is the language of the unheard, and the voices are now nationwide, impacting the children and the elders.

“But if we’re the problem, it’s our responsibility to stop us,” he said.

“We have to hold that conversation. Listen and make a change. “If we as African Americans and we as police officers and we as pastors, if we are not heard and there is no change, then we stay in the same cycle.”