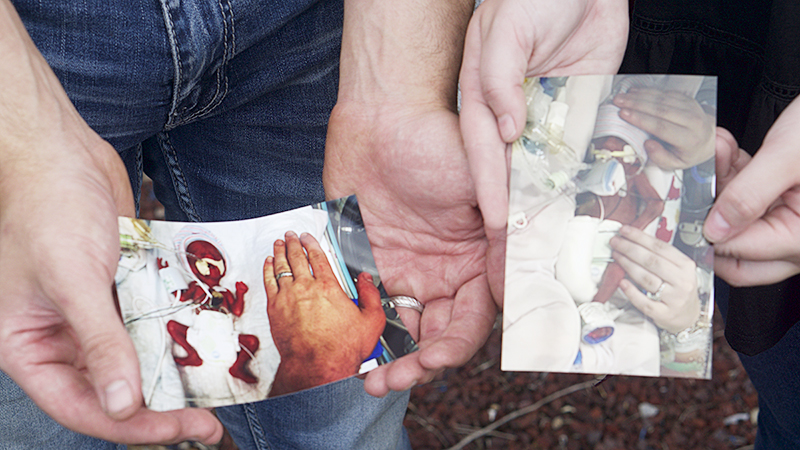 Archie Burden, left, was as small as a hand at birth. William, right, was only 1 pound, 8 ounces. (Cassandra Jenkins/The News)

NEDERLAND — Archie Burden may be small in size, but the fight in his heart is big.

Born at 23 weeks, Archie, an identical twin, is the smallest male to survive a premature birth in America.

Weighing in at 13 ounces and measuring 9.5 inches long, he was only given a 15 percent chance to live.

Parents Haley and Hayden Burden said their lives stopped that day, standing in a room at Texas Children’s Hospital on March 23 waiting to hear the best or worst news of their lives.

“It was the worst feeling ever,” Hayden said, staring down at a photo of his first-born son as small as his fist. “The lows were really low, but at the end of the day when the doctor told us he was going to pull through … it was more rewarding than any pain we felt.”

Archie and his brother William were nothing short of a miracle. 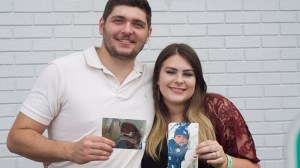 At 16 weeks, Haley found out she was having twins. At 17 weeks, the doctor diagnosed her with TTTS, or Twin-to-Twin Transfusion Syndrome. It is a rare pregnancy condition-affecting twins in a one-way blood transfusion.

Archie was sending blood and nutrients to William, but Williams was not sending it back.

As the smaller of the twins, Haley was told Archie had a 5 percent chance of surviving an invasive surgery.

“At 21 weeks my water broke with William, Baby A, and Baby B, Archie, was still intact,” she said. “I was admitted at 21 weeks. They kept me there until 23 weeks. The night that I delivered, I didn’t know I was in labor. I told my husband he could go home because he had work on Monday. He pulled up in the driveway and I called him back and was like ‘I’m in labor. Come back.’”

His fight didn’t end there. 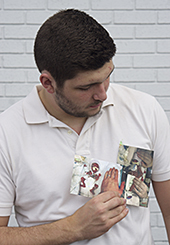 Hayden Burden holds photos of his sons across his heart.

As a premature infant, he was diagnosed with another life threatening disease known as necrotizing enterocolitis (NEC).

NEC causes the wall of the intestine to become invaded by bacteria, causing local infection and inflammation that can destroy the large intestine.

Archie became ill, but defeated his first diagnosis with minor difficulties. His second time was not so easy.

The redeveloped complications caused blood clots blocking his kidneys and belly from getting blood.

Suddenly, Haley and Hayden found themselves faced with one of the toughest choice of their lives.

“The doctor told us that we could do a surgery to cut open his abdomen and see if his intestines were dead,” Haley said. “The surgery had a 90 percent fatality rate. The other choice was to just wait and see if the medicine healed him. Either way, they said he likely only had a few hours to live.”

Haley and Hayden chose against the surgery and decided to spend as much time with Archie as possible in what were likely his final moments. 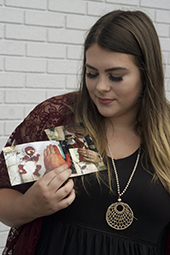 Mother Haley Burden shows photos of her sons at birth.

“It went from he had three hours left to live, to 48 hours, to a week,” Hayden said. “We soaked up all the time we could and then one day, the doctor came in and said ‘the medicine’s working.’ It looked like he was going to pull through.”

Tears of happiness were shed.

“We immediately went to Google and learned all that we could of the dangers of TTTS. When Haley started developing further complications it felt like the rug was pulled out from underneath us again. When she finally delivered William and Archie that was the darkest day. We realized what the prospects were and our hearts were heavy.”

Burden and his wife Kristi took to the Lord for guidance and hope.

“Our family, our church family and all our friends lifted us in prayer and support,” he said. “We tangibly felt the affects of their prayers. It carried us through. When we heard good news it rekindled our hope, all those worries tried to diffuse our hope, but with every good turn it resurrected.”

Members of First Baptist and Christians all around the world prayed for the recovery of young William and Archie.

Burden cried out in joy the day the prayer was answered.

“They really are little miracles and the result of answered prayers,” he said. “Kristi and I are so proud of Hayden and Haley and we are desperate to get our hands on William and Archie. We are going to spoil them so much when we get them amongst us.”

Haley said without God and the power of prayer, her son would not be alive today.

“I don’t even know how to put it into words,” she said. “But hearing that he was going to pull through, all I could think was ‘thank the Lord.’ Everyone prayed for their recovery and they wouldn’t be alive if it wasn’t for our community and God.”

A prayer page on Facebook called “William and Archie’s Journey” is updated daily on the twins’ conditions.

Both boys are currently being kept at Texas Children’s Hospital in Houston for monitoring.

William is now 5 pounds and Archie is 2. Haley and Hayden are hoping to bring their sons home in the coming months.

A petition for the Guinness World Records’ shortest male twin born alive, 9.5 inches, is in the works for Archie.