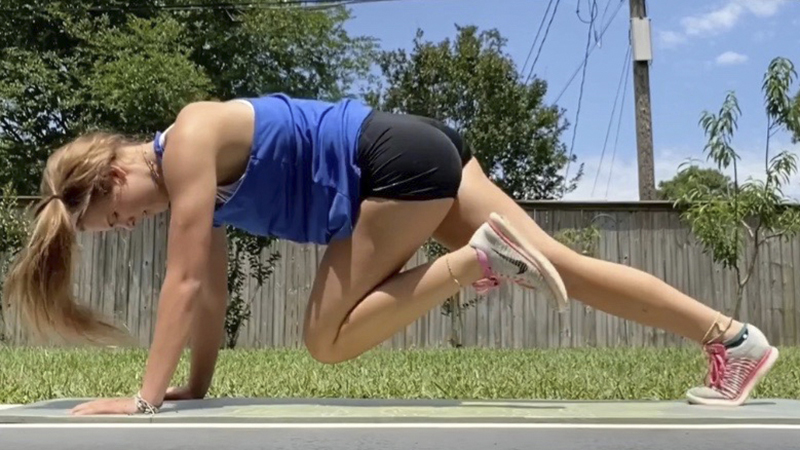 PNG’s Morgan Coates records a workout routine on her own in May. (Courtesy photo)

The results are in: Port Neches-Groves claims victory in the first ever Mid-County Madness COVID Edition competition with the Nederland volleyball team.

Coaches Allie Crommett of Nederland and Brittany Fruge of PNG, longtime friends despite the intense rivalry between the respective schools, dreamed up the competition. The goal was to get their volleyball players to keep working out and staying in shape at home while offseason practicing and workouts were put on hold to help fight the spread of the COVID-19 pandemic.

For each weekday in May, the coaches gave their players a workout to perform at home. The players recorded video of their workouts and submitted them to Crommett and Fruge, who scored the teams and the players based on how many workouts were submitted, with bonus points given for consistently submitting workouts and for winning the day’s competition.

The final totals had PNG on top with 626 points and Nederland with 477. 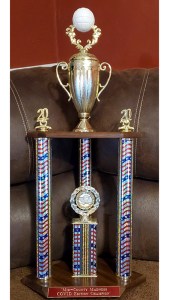 This trophy was awarded to Coach Brittany Fruge for the PNG volleyball team’s victory in the Mid-County Madness COVID Edition workout competition in May. (Courtesy photo)

Crommett was happy so many of her kids participated.

“It definitely got them involved and it was something to do,” Crommett said. “At the time we didn’t know we were going to be able to go back June 8, but I think they knew they would eventually. I had one parent call me and say one of the workouts was miserable, but she knows that if she doesn’t do it, what I’m going to make them do is going to be worse!”

The competitive component helped keep all the athletes motivated to work out on their own, Fruge said.

“It was a lot of fun,” she said. “The kids enjoyed it, and it took their mind of the ‘we’re conditioning’ and ‘we’re working out’ part of it because they were so dead set on winning. It was also great seeing so many kids get involved, get busy and get their teammates involved. It was really nice, especially since we had such a negative end to the school year, ending on something so positive.”

For each of the four weeks of the competition one player was named an overall winner of the week. Nederland’s Ava Wiltz won weeks one and three, while PNG’s Lydia Garza won week two and Jocelyn Dinh won week four.

Wiltz and Dinh, both entering their sophomore years, were also the only two athletes to work out on every day during the competition.

“She found a way to do it,” Fruge said of Dinh. “There were a lot of restrictions in her household just because of where some cases were picked up, but she found a way to run around in her house and max out her workout. There was a no-excuse mentality from her, and I just love that.

“It’s very promising for both schools for their young players. We have a very hungry group of young kids and I’m very excited to see that for the future of both programs.”

The coaches will get a better picture of just how effective the competition was at keeping their players in shape when they finally see them in person on Monday (June 8). Summer practice and workouts will be allowed to continue for all UIL schools on Monday with restrictions in place to keep COVID-19 from spreading.

A big challenge for Crommett has been planning these workouts to limit the number of players working at a time.

“The biggest thing for me is I don’t know how many kids I’m going to have,” she said. “I’m planning for about 60. I had 37 returners through my program this past year.

We’ve had meetings up at the high school talking about our square footage, how many kids we can fit in the weight room.”

With the limits in place, the days will likely be longer as well, Fruge said.

“We have to keep our numbers down and we have to allow time in between sessions to clean,” she said. “It’s definitely going to make for a longer day, but I think that as hard as these kids have worked on their own, they’re going to come in and work hard for us. In smaller groups I actually think we’re going to get more out of it.”

For that hard work, Fruge has taken a specially made trophy commemorating PNG’s victory. Her team will keep the trophy for the year and hopefully compete again next offseason.