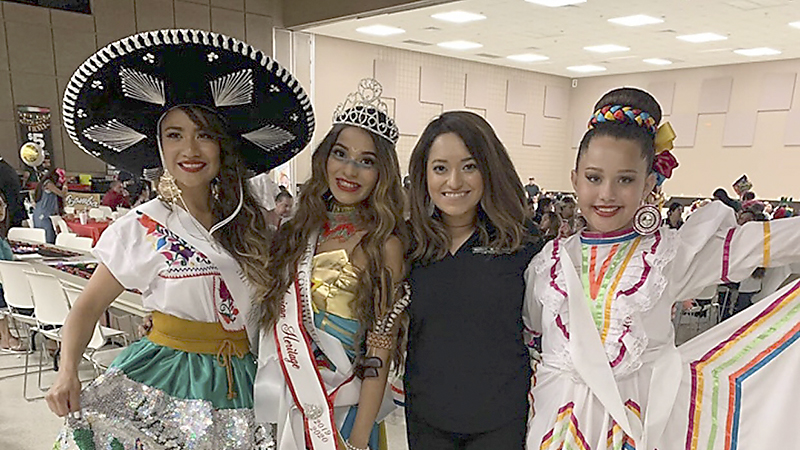 Denay Pena, left, Elaina Escobedo, Shaina Escobedo, and Ava Pena pose for a photo during the Mexican Heritage Fiesta in 2019. This year’s 52nd Fiesta is postponed until later in the year. (Courtesy photo)

The 52nd Mexican Heritage Society’s Fiesta is postponed due to COVID-19 concerns but it is not canceled, organizers say.

The Fiesta is usually held the second weekend in September at the Bob Bowers Civic Center and features a pageant, food vendors, Folkloric Dancers, music, dancing and more celebrating the Mexican heritage and the Mexican ancestral independence from Spain on Sept. 16, 1810.

Mexican Heritage Society President Zulema Escobedo said they are looking at a tentative date in the first or second week of November — some time after Halloween but before Thanksgiving.

There are looking at two plans. One is to have the pageant live streamed and rotate out the girls in the categories. Of course, this would extend the normal 20-minute per category to about an hour each.

The other plan is to move the event to the Pavilion on Procter Street, an option Escobedo hopes will be chosen.

Escobedo said the outdoor setting where people can be spaced out is a better option than being placed in a closed room. There can be X’s placed a distance apart for families to sit together and “still have something for the community to come out for.”

The Folkloric Dancers whose costumes and dances tell stories of the Mexican heritage, are an integral part of the Fiesta. Escobedo said there are about 30 active members but expects less than that to participate should the event be at the pavilion. And instead of six dancers at a time on stage at the same time the number can be reduced.

She does worry about the pageant and the traditions surrounding it. The outgoing queen will hand over her crown to the new queen and have one last performance — something that is special to the girl participating. Escobedo does not want to take this away.

A final decision will be made some time in September, and Escobedo is hoping for a November event.

The Fiesta has seen some changes in the past years and weather has been the biggest factor in the postponements. The civic center was damaged with Hurricane Rita in 2005 so the event was moved to a different location. Three years later, Hurricane Ike struck the day the Fiesta was to be held. Again, the civic center was out of commission for repairs, so the event was pushed back to December 2008.

The Fiesta’s 50th anniversary brought past queens together with current ones and former Folkloric Dancers up to age 61 to current to perform at the event.

Applications for the pageant are still being taken. For more information, go to mexicanheritagefiesta.com.