Those at Port Arthur rally against police brutality share experiences, hopes for future 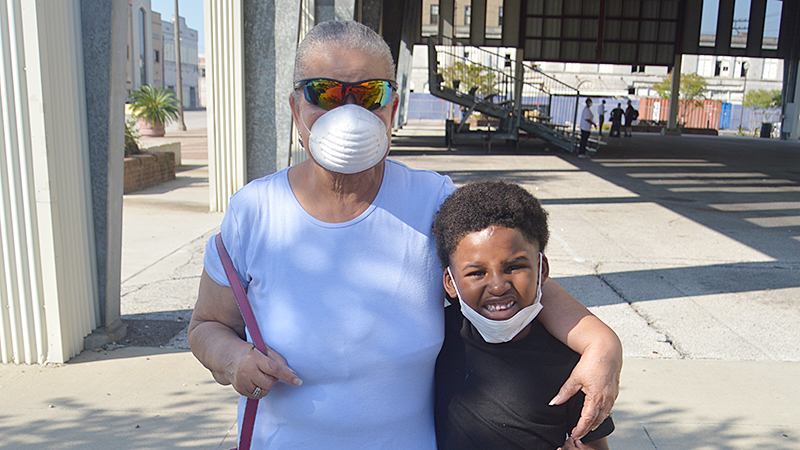 Mary Sterling still remembers the taunts and threats to her and her friends when they were teenagers in Beaumont.

The African American woman shared some of her stories Tuesday evening with a reporter, all the while the Texas sun beating down on her head as her great grandson jockeying for her attention between each break in the conversation.

“You don’t ever forget that,” Sterling said. “It’s all in here.”

Sterling and her sister moved to Beaumont with their mom in 1955.

She was a teenager.

“We would walk to downtown Beaumont and always had problems with whatever young white person was around in the area,” she said. “We would be walking on the sidewalk and here come the girls behind you, ‘N—–, get your ass off this sidewalk. You see us walking here.’ We didn’t talk back. If we talked back to them there would be some kind of repercussions.”

Sterling says she remembers in 1958 returning from a dance in Downtown Beaumont with her friends.

“We walked and on the way back we encountered a motorcycle gang with white boys,” she said. “They just rode all around us trying to scare us, and we were scared. They took off because we stopped moving. We didn’t move anymore.”

Sterling, who moved to Port Arthur in 1970, shared her stories before the beginning of Tuesday’s NAACP and City of Port Arthur rally and protest calling for an end to police brutality.

Port Arthur, like so many cities across the globe, is responding to the killing last week of Houston-native George Floyd, an African-American man who died following a filmed encounter with Minneapolis, Minnesota, police.

“You can tell by looking at me that I have been here awhile,” Sterling said. “I have been through all types of situations that can possibly happen to somebody that has been disrespected because of race. It’s not OK to be judged for my race.”

The retired security guard from the Valero refinery has raised six children in Port Arthur.

She wants those who see her and other African Americans to know, “we are all alike. It’s not like we are born with a tail or Devil-spiked ears. I don’t understand. It’s been like this ever since I was a little kid.”

She remains skeptical she will see real change in her lifetime because she was around to see great leaders like Dr. Martin Luther King Jr. and others try to make a difference.

“It didn’t really change anything,” she said. “You can still walk into a store and the clerk is right behind you like you’re going to steal something.” 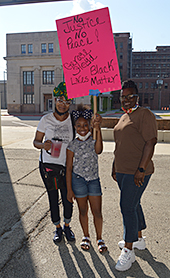 Asheli said it was important for her to attend because she is a young black woman feeling sorry for everything that goes on in the black community, especially the way police treat black males.

She has a 15-year-old son and they have talked  about being careful when he is out and in contact with police officers.

“I am hopeful that things will change, but the way things are going right now with all the riots, (authorities) still are not doing anything to the guys that killed (Floyd),” Asheli said. “It seems like it’s going to take a long time, but I am praying.”

Derek Chauvin, the officer seen kneeling on Floyd’s neck for nearly nine minutes, was charged on Friday with third-degree murder and second-degree manslaughter. Still, three other officers on scene — Thomas Lane, J.A. Kueng and Tou Thao — have not been charged, despite the family’s and protesters wishes. 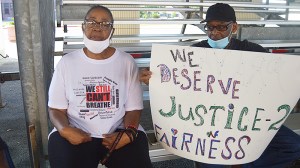 Patsy Arceneaux and Patrick Plumer were on hand Tuesday evening in Port Arthur.

During a short interview with a local reporter before Tuesday’s protest, Catherine Glover said she was out to support the grandparents and great grandparents who worry for the safety of so many young people.

“My heart goes out to them; that’s all I can say,” she shared before being overcome with emotion.

Patsy Arceneaux wore a shirt that displayed the names of so many young African Americans who lost their lives at the hands of authority figures, like Freddie Gray, Alton Sterling and Trayvon Martin.

She said it is imperative those seeking change register to vote and make their voices heard in the selection of future leaders.

Patrick Plumer, retired from the United States Air Force, displayed his meticulously crafted sign, noting he served the Red, White and Blue flag but is continually singled out because he is black.