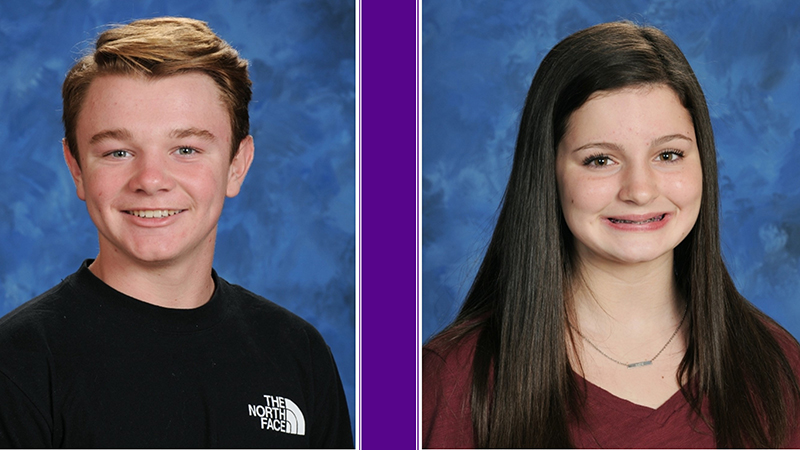 This medal and certificate are given annually to one eighth grade girl and boy to recognize the high qualities of courage, honor, leadership, patriotism, scholarship and service.

Receiving the award for the 2019-20 school year are Karys Boudoin, daughter of Trayce and Katy Boudoin of Port Neches; and Chase Johnson, son of Jarrett and Amberly Johnson of Port Neches.

Karys is actively involved in her school and community. She serves as Student Council President, is a member of National Junior Honor Society, a library aide and is a two-year member of the volleyball, basketball and track teams.

Karys is also an active member of St. Elizabeth Catholic Church, where she serves as an altar server and is involved with the youth group. She attends Keely Jardell’s School of Dance and is also a member of the Mid County Performing Arts Company.

Aside from these extracurricular activities, Karys is a great big sister to her three younger sisters and she loves spending time with all her cousins and extended family. Karys also enjoys time with friends dancing, tie dying and riding bikes.

On a special note, Karys is following the legacy of her father, Trayce Boudoin, and cousin, Brock Boudoin, who also received this award when they were in middle school.

Chase is an outstanding student. Moving to Port Neches his sixth grade year is just what Chase needed to foster his competitive spirit, relentless drive and natural leadership abilities.

He has excelled academically, taking advanced classes and averaging all A’s. He received the President’s Award for Academic Achievement, excellence in Science, History, and Language Arts, and participated in UIL poetry.

Additionally, Chase received a certificate for attending the Youth Leadership Conference at Lamar University. Outside of school, Chase is passionate about sports, exercising and anything outdoors.

He enthusiastically played on the football, basketball and track teams. He also loves playing baseball and was a part of the 12-year-old All Star team that played in the Little League State Tournament.

He currently plays for the Gladiator organization on the weekends. Chase is also an avid bowhunter and enjoys fishing. Most importantly to Chase is his family, friends, and faith.

He attends St. Elizabeth Catholic Church in Port Neches and plans to be an active member of the high school youth group this fall.