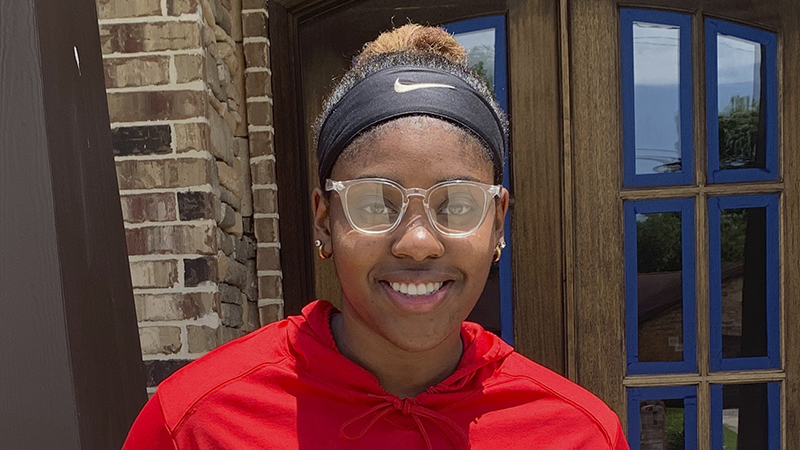 Jackie Gibbs started her freshman year in high school working toward goals of earning an associate’s degree and a basketball scholarship. Now both have now come to fruition.

Gibbs, who is graduating this year from Memorial High School, earned a basketball and academic scholarship to attend the private Christian college Friends University in Wichita, Kansas. She’s taking with her an associate’s degree in general studies and plans on studying psychology in college.

“I was always hearing from Coach (Kevin) Henry that the schools would reach out, and they did, a lot of different schools,” Gibbs said. “I really just wanted to make a decision during the month of May, and I was looking for a school that had a great psychology program, because I wanted to major in psychology. I also wanted a school that was going to help me become a better basketball player.”

Gibbs chose Friends University over other programs because of the quality of its basketball program.

Culver-Stockton College in Canton, Mo., had also offered her an academic scholarship. 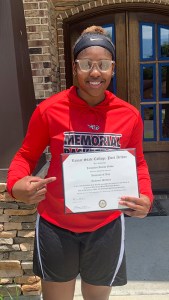 Jackie Gibbs poses on Tuesday with a diploma for an associate degree in general studies from Lamar State College-Port Arthur.

“I was stuck between this school and a school in Missouri,” she said. “Missouri had a better psychology program, but I think Friends had more of that complete workout that I was really looking for as far as basketball, and that team chemistry that I was looking for.”

Gibbs said first-year Friends head coach Dean Jaderston worked with her to get the basketball and academic awards.

“I love Coach Jaderston out there,” Gibbs said. “Coach Jaderston made me feel welcome and he knew a lot about me as a player, which I liked a lot and helped me with my decision as well. He was aware of my accomplishment for getting my associate degree and maintaining a 3.5 or higher, so he told me a little bit about it, finding a balance and saying he had something to offer for my academics.”

“She had to be very disciplined and learn how to balance school and athletics in order to be successful and make the grades, and she was able to do that,” Memorial coach Kevin Henry said. “She’s a different breed, to where when she’s focused and tries to do something she sets her mind to. She’s determined. She displayed that not only on the court but also in the classroom. There’s not a lot of people who can go through that, let alone master high school but also receive an associate degree. The maturity and all of that plays a big factor. She handled it well.”

Gibbs has earned 60 credit hours for her associate’s degree. She’s still working on plans for what she’ll do after finishing her bachelor’s degree in two years.

“I’ve told myself that I wanted to play for two years in Kansas and then I wanted to come back down to Texas to get my master’s degree,” Gibbs said. “That’s one thing, but I could also very much enjoy playing in Kansas. It’s something me and Coach Jaderston have talked about, as well, the options I have after I finish my two years, because I could be eligible to play two more with my options.”

Henry said Gibbs’ consistency and growth over her four years at Memorial earned her the opportunity to play at Friends.

“She’s been a consistent player for us since her freshman year,” he said. “We’ve had her on varsity since then and she’s been able to help us. I think her showing growth here — we send out highlights from games to catch the eyes of different college coaches — really helped her. It helped her attain that scholarship.”