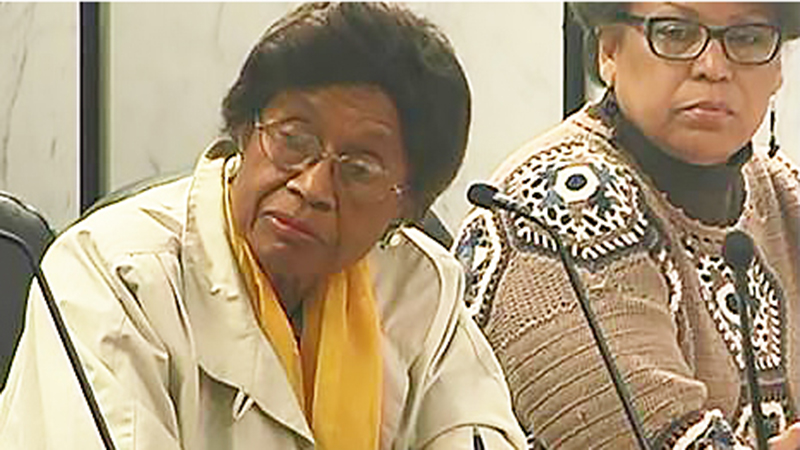 Inell Moore, left, listens during a Port Arthur Planning and Zoning Commission along with Alma LeBlanc, circa 2016. (Courtesy photo)

Before integrating the faculty at a local elementary school and community college, Inell Ross Moore became a proven leader in Port Arthur.

“My mom started off as a real estate agent with George Lacey and Arthur Guidry,” said Beverly King, Moore’s daughter. “She could see the need in the community. Mr. Lacey encouraged her to step forward. That’s how she continued to keep getting involved even more so.

“She saw the need in the community for better housing and started investing to help people become first-time homeowners. She originally started with the city trying to improve the road conditions in the El Vista neighborhood, in the Highland and Edgeport sections. She campaigned getting signatures.

The roads were all shale, where dust accumulated all the time. They got a petition together to get the roads improved.”

From that point forward, King said, Moore became more involved in helping with the city, going on to serve on the Port Arthur Planning and Zoning Commission for almost 48 years.

Moore died May 7 at age 87. A viewing service is set for 9-11 a.m. Saturday at Gabriel Funeral Home Chapel with a private funeral service to follow.

Moore will be buried following the funeral at Greenlawn Memorial Park.

Val Tizeno, Port Arthur’s city attorney, said she’s never heard of anyone in Port Arthur serving in one city capacity as long as Moore did.

Moore was appointed to the Planning and Zoning Commission on June 5, 1972, and served until her death.

“Other than the city secretary in Houston [the late Anna Russell], I don’t think people stay around that long,” Tizeno said, adding Moore was very knowledgeable and rarely missed a meeting. “She was a very positive person who always wanted to inspire people.”

Russell worked 70 years in the Houston city secretary’s office and became the secretary in July 1972, according to the Houston Chronicle. Russell died at age 88 on Feb. 3.

Asked what Moore thought about serving nearly 48 years on one commission, King said: “She loved it. She wanted to see the city progress. She continued to pay attention to that as far as what’s going on.”

City Manager Ron Burton said Moore was more knowledgeable than any other person on the commission.

Moore was born March 31, 1933. King said her mother was active in church leadership roles since she was 15. Moore became a financial secretary at 16 at Nazarene Baptist Church in Houston. She was most recently a member of New St. John Missionary Baptist Church.

Following graduation from Phillis Wheatley High School, Moore earned her bachelor’s and master’s degrees in education from Texas Southern and moved to Port Arthur in 1954 to begin her teaching career at Lamar Elementary School.

She also taught at Carver Elementary before integrating the faculty at Sam Houston.

Moore was an English instructor and moved into developmental education, which is basic language arts, at Port Arthur College, which became Lamar University Port Arthur in 1974 and the present Lamar State College Port Arthur in 1995. She retired in 2011 after 40 years.

“She mentored the students,” former LSCPA President Dr. Sam Monroe said. “It was more to it than just lecturing or giving her assignments. She worked with them and encouraged them. I never heard a complaint on her work assignments. She was so eager to help and give her time away from class, which was unusual. She was a trailblazer. … She really was an excellent teacher and very fine person who went beyond the call of duty to help her students.”

Among her civic activities, Moore was a member of Delta Sigma Theta Sorority, the Greater Port Arthur Chamber of Commerce and Top Ladies of Distinction, serving two terms as president. She also was the first black president of the local Camp Fire Club of America board.