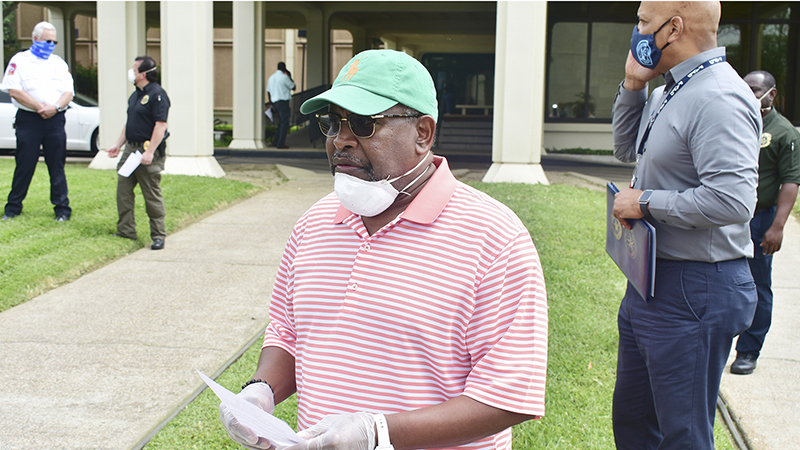 For the most part people in the area are observing the COVID-19 rules of social distancing and such, with a few minor exceptions, according to local law enforcement.

In some instances people had to be reminded that gatherings of large groups isn’t allowed, but no one was arrested or ticketed for not wearing a mask or being too close to another person.

Port Neches Police Chief Paul Lemoine said they have received only three calls during this time of the pandemic, but incidents of driving while intoxicated have increased.

Last week two men and one woman driving in a golf cart were reportedly seen by an officer making a traffic violation and were stopped near La Maison Beausoleil in Port Neches Riverfront Park.

“The driver and the passenger were irritated the police even stopped them,” Lemoine said, indicating it is illegal to operate a golf cart under the influence.

The female in the golf cart didn’t contribute to the conversation but the men did — and ended up in jail. One of the men, born in 1979, was charged with driving while intoxicated. The second man, born in 1981, had several active warrants and was arrested, as well.

Then, at the jail, the second man allegedly proceeded to cough in the jailers’ faces and said, “I hope you enjoy your 14-day quarantine. I got COVID-19.”

The man was then charged with retaliation.

Lemoine did not release the names of the two men who were arrested but said they are Port Neches residents.

Port Arthur has fared well with the social distancing rules, according to police.

Sgt. Sadie Guedry said officers made a call a few weeks ago to a residence in reference to a large gathering.

“Officers gave them a verbal warning and made them disperse,” Guedry said.

Groves saw some complaints with gatherings as well.

“From March 9 to April 27 we had 21 calls from people concerned about parties of 10 or more gathering, people complaining about gatherings,” City Marshal Norman Reynolds Jr. said. “The end result was none had more than 10 gathered. We advised them to quiet down the noise level.”

Groves Police also received a call where the complainant said a person he knew had tested positive for COVID-19 was at H-E-B but gave no other details.

“Again, no warning or citations were given,” Reynolds said. “We can file on him (the person reportedly at a store who tested positive for COVID-19) but we are not sure what charges to file. This would fall to the fire chief, who is the head of emergency management.”

There have been complaints to police in Groves but in the end everyone complied, Reynolds said.

Nederland Police Chief Gary Porter said they have not had any issues with social distancing other than warning a few people of curfew orders who are under the age of 18.

Plus there is a bit of a problem for law enforcement when people walk together. Those people may live in the same household.

For the most part, people are voluntarily doing what they’re supposed to be doing, police say.

“There were a couple of instances where we had to warn people about curfews and when there was a group of young people at the stadium playing catch with a football that they were in violation of the curfew,” Porter said.

Minor issues have occurred such as warning a few businesses that they couldn’t have people in their lobby and a few beauticians who were operating when they weren’t supposed to be.

“We’re not doing any spot checks right now to see if people are in compliance,” Porter said. “If there is a complaint or if we go by and it doesn’t look like they are in compliance we will check.”

NPD is not going to throw someone in jail unless they are doing something flagrant, he said, adding they are not going to walk up to somebody and arrest them or issue a violation, it would be sent to court or to the District Attorney’s office.

Texas Gov. Greg Abbott cleared the way for hair salons to reopen May 8 with stipulations; hairstylists can only work with one customer at a time, and days later announced that stores, restaurants, movie theaters and malls can reopen at 25 percent capacity.