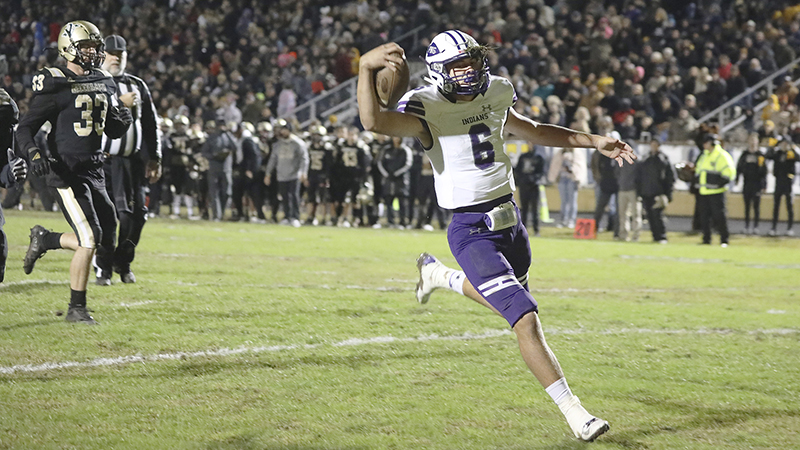 PNG quarterback Blake Bost rushes for a touchdown as Nederland linebacker Blaze Crowder-Brown follows on the play in the first quarter during the 2019 Bum Phillips Bowl in Nederland. (Leo Weeks Photographers) 11-9-19

Blake Bost is drawing attention from several colleges entering his senior year as quarterback for the Port Neches-Groves Indians.

“Right now I’ve been receiving a lot of love from colleges and I greatly appreciate it from them,” Bost said.

He’s holding off on saying which school he might prefer, especially since he hasn’t gotten the chance to visit the campuses. The COVID-19 pandemic has kept him at home, working out and reviewing last year’s film with coach Brandon Faircloth.

“I’m just trying to hold off right now, because I want to visit the colleges and see everything they have to offer,” Bost said. “I can’t really do that right now with the coronavirus, so I’m trying to be patient with it.”

He wants to pick a school he feels will be the best fit.

“I just want a family based college, and somebody that really wants me and the best fit with the college, the team and the coaching staff,” he said.

Bost hopes that by summer colleges will be able to open up their camps and campuses to give every college prospect a better chance to make their choices.

Until then, Bost’s focus is on preparing for the fall.

“Me and my teammates have really just been trying to work,” he said. “We’re really not thinking about not having it. We’re thinking about winning district and making it deeper into the playoffs.”

He’s running repetitions with his receivers and running backs out on the field, and though the whole team can’t be there, Bost feels everyone is doing well and buying into the program for next season.

“I think it’s going to be great,” he said. “I think everybody’s starting to buy in, to where everybody’s going to try to be great out there and do their best. I feel like that’s just a great winning program right there.”

Bost has been doing his part to become a better leader.

“The more repetitions I do and the more I go over film with coach Faircloth, I feel like it’s making me a lot better quarterback and leader out there,” he said. “I’m working on just being a better, vocal leader. That’s one of the main ones, and there’s a few others.”

Bost was named The Port Arthur News Offensive Player of the Year for 2019 in December. He led the Indians to a 7-4 record and a 27-21 victory against Nederland in the Bum Phillips Bowl.

Bost hasn’t decided yet on what he might study in college, but he’s leaning toward something in business.