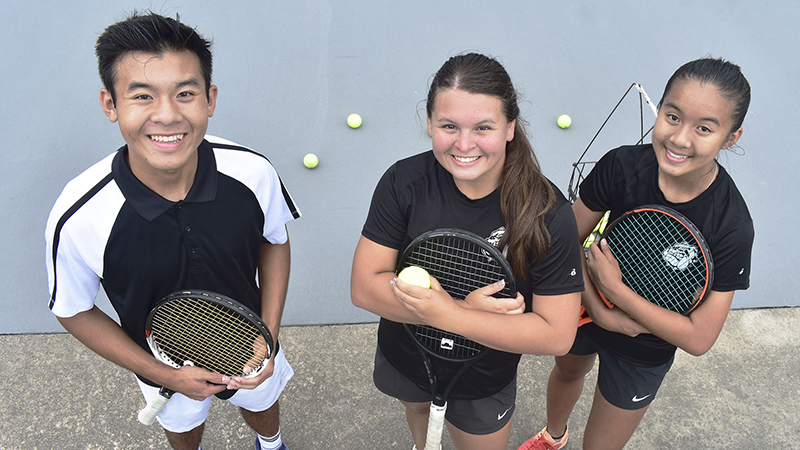 Brandon Do, left, won the state 5A singles championship for Nederland in 2019. Jayci Wong, center, and Megan Do teamed up to reach the 5A doubles semifinals. (I.C. Murrell/The News)

Brandon Do didn’t get the chance to defend his state title.

In fact, he didn’t get to play any spring tennis for his senior year at Nederland High School as the COVID-19 pandemic prompted the University Interscholastic League to cancel all competition across Texas.

As a junior, Brandon defeated Red Oak’s Jered Wilson in the 5A boys singles state championship match in 2019. He was looking forward to a big senior year.

“I’m obviously pretty saddened and pretty disappointed about all this, since it’s my senior year and all that,” Brandon said. “It’s not just me — it’s everyone. It’s hard to just stop right now. I was really looking forward to it.”

Brandon’s sister, Megan Do, likewise, was disappointed at the lack of a spring tennis season.

“I’m kind of bummed that our season got canceled since we didn’t get to play our spring season, but I still have two more years, unlike Brandon,” she said.

Megan and Jayci Wong, who graduated last year, reached the state semifinals in 2019 for girls doubles, losing to Fiona Crawley and Brianna Wilbur of San Antonio Alamo Heights and taking third place. Crawley and Wilbur went on to win the state title, defeating Annika Juergens and Lizann Boyer of Dallas Highland Park in the finals.

Neither Brandon nor Megan are putting up their rackets yet.

“Obviously we can’t hit with my coach and teammates,” Brandon said. “I just usually hit with my dad and my sister every other day, and then I work out on my own at home.”

Brandon’s focus is now on Lamar University. He committed to the Cardinals in December and is putting his efforts, and all the time the pandemic has afforded him, to prepare to play at the college level.

“I’m pretty excited,” Brandon said. “I think it’s going to be a good experience, even though it’s only 20 minutes away from where I live. It’s nice to get away.”

“I’m a bit more motivated to go a little bit farther because I’ve never played singles for my spring season,” she said. “Last year I played with Jayci for doubles, but I really want to see how well I do in singles.”

Wong has been able to play some tennis for the Cardinals in her freshman year under coach David Wong, her father.

“It’s been really great,” she said. “I love playing for my dad, and I knew some of the girls beforehand, but now I’ve been getting to play with them and be around them a lot more. It’s made me closer with everyone. It’s been a lot of fun.”

Like Texas high schools, competition for college was also canceled due to the pandemic. The Cardinals managed to play four matches against Southland Conference opponents before the cancellation of the March 14 match at Texas A&M-Corpus Christi. The rest of the spring season, including the SLC Tournament that was going to be hosted at Lamar April 23-25, were all canceled.

“We put a delay on everything,” Wong said. “Everybody was just getting into the swing of things. Just having to abruptly stop like that made it very difficult, especially for our seniors. Our conference tournament was actually going to be held in Beaumont, so that was really tough to have to let go of.”

Wong said coaches have been keeping her and her teammates busy with workouts, though she’s refraining from working with her father because of restrictions for coaches.

“During this time we’re able to work on the things we’re not able to work on,” Wong said. “For instance I can work on my footwork more. I have more time to do mental training because everything goes together. It’s not just the strokes, we all have that time to get better at the little things that we aren’t so good in.”