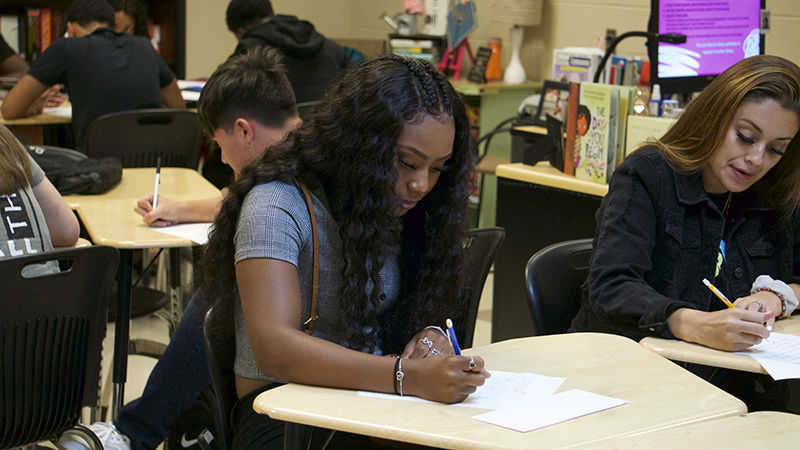 Students at Memorial High School attend a literature class during their first day of the 2019-2020 school year on Wednesday. (Cassandra Jenkins/The News)

After hearing from several voices including parents, students and advocates for the Class of 2020, district officials announced their decision this week.

Superintendent Mark Porterie said the choice includes a private ceremony and parade to accommodate the community in the best way possible.

“The Commissioner of Education gave us four choices, and we elected to choose the vehicle ceremony as our method of honoring our 2020 graduates,” he said. “We formulated a plan to acknowledge all of our graduating seniors in a private ceremony with two family members or friends to accompany them.

“At this time, they will be able to see one another, express their sentiments to each other and most importantly begin the closure of their grade school chapters.”

The graduation plan includes a private ceremony celebrating all students to recognize their accomplishments in different categories in a modified graduation ceremony at Memorial Stadium from 8:30 to 9 a.m. June 6. The stadium is located at Thomas Jefferson Middle School.

Social distancing guidelines will place students six feet away from each other during the ceremony.

Each student will receive a protective mask to be worn during the ceremony and two tickets to invite family members.

A Parade of Graduates will follow at 10 a.m. beginning on the corner of Ninth Avenue and Staff Sgt. Lucian Adams Dr.

Five guests are allowed in the vehicles for the parade.

At the end of the parade graduates will exit their vehicles and walk across the stage and receive their diplomas.

Memorial High School senior Jahaira Rivas said receiving her diploma in person is all she wanted.

“With all this happening, I know we are limited on what we can do,” she said. “But I’m excited that we are just being allowed to walk across the stage. We put in 13 years of hard work to lead up to this one momentous occasion in our lives, and what we wanted to do more than anything was grab our diplomas and walk across the stage.”

Porterie said the decision was largely based on Centers for Disease Control and Prevention and Texas Education Agency guidelines as well as shared sentiments from concerned parents and students.

Julius Neal, whose son Jatavian Neal will graduate this year, was one of those representative voices.

“The overall consensus was that even though the parents, the kids and the community won’t be getting the graduation we want, we have to put in the fact that the school district planned this with the guidelines of what’s going on in the world right now,” Neal said. “The school officials want us to be safe, and even though it’s not halfway, I do think it’s better than it was initially.”

Neal said he is expecting the school district to receive some backlash on the decision, but knows it’s in the best interests of the people.

“I know there are going to be parents still mad, but we need to understand that when you make decisions not everyone is going to be happy about it,” he said. “Although we all wanted an in-person graduation going with CDC and TEA guidelines, this plan makes sense and it will be nice when it’s all said and done.”

The entire celebration will be streamed on two large outdoor screens as well as live through all PAISD social media outlets.