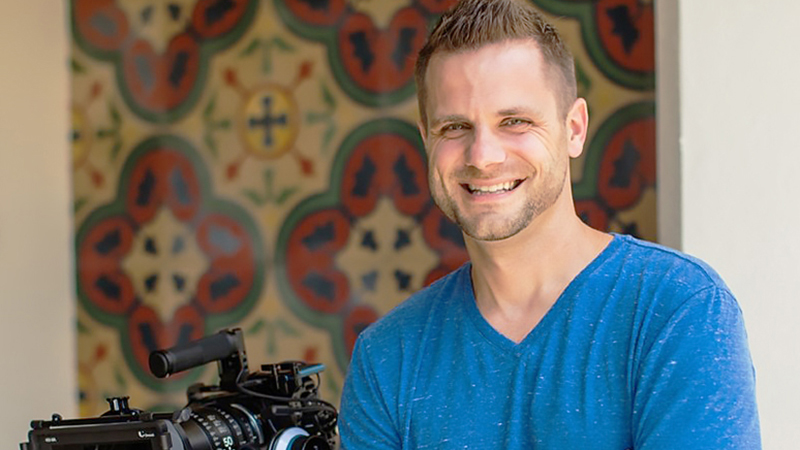 As the coronavirus pandemic has slowed down the movie theater business in Texas, would-be goers may find themselves streaming a large number of films and documentaries at home.

A Port Arthur native has directed a documentary on the rise of a leading streaming company, and it won the top prize in its category at November’s Lone Star Film Festival in Fort Worth. 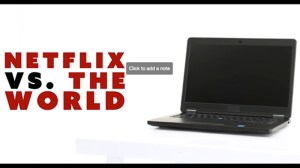 The title card for Netflix vs. the World, directed by Port Arthur native Shawn Cauthen.

Now, streamers can find Shawn Cauthen’s Netflix vs. the World on Amazon Prime Video. The doc, based on journalist Gina Keating’s 2012 book Netflixed: The Epic Battle for America’s Eyeballs, made its streaming debut April 28.

The 1-hour, 44-minute video details the start of Netflix from the Silicon Valley in California, through a longstanding battle with rental chain Blockbuster Video and toward its rise to prominence as Blockbuster began to fade away during America’s transition from VHS and DVD formats to on-demand platforms.

“The whole aspect of going into it, I was one of those people [who asked] — you always hear the story, ‘Big, stupid Blockbuster — how did they pass on buying Netflix?’” Cauthen, 37, said.

Netflix vs. the World, Keating said, celebrates the American entrepreneurial spirit of Netflix but in a journalistic manner.

Founded by Reed Hastings and Marc Randolph in 1997, Netflix transformed from a company of computer experts to a team that bet $100 million on its first major series, House of Cards. Netflix now houses series such as Orange is the New Black, Stranger Things and Ozark. 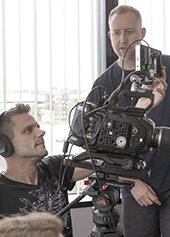 Shawn Cauthen, left, films a segment of Netflix vs. the World. (Courtesy photo)

Keating celebrated the work her fellow University of Texas graduate Cauthen did in his directorial debut.

“He came in and drove this project in a way I could not have,” said Keating, a St. Louis native. “We had the same idea for making it but in sort of a ‘gee-whiz’ fun idea. … [Cauthen is] brilliant. I really hope to get to work with him again.”

Cauthen grew up in the Stonegate subdivision of Port Arthur but attended school in the Nederland Independent School District, graduating high school in 2001. Cauthen majored in film at UT and later worked on a reality series for MTV, Room Raiders, for two seasons.

“I moved to Los Angeles and got into entertainment news for a channel in Spain,” Cauthen said. “I met my wife in L.A., and we had our first child there.”

The Cauthens have four daughters, ranging in age from 8 years to 11 months. The family moved back to Texas — “As a Texan, you have to come back home, eventually,” Shawn said — and he landed a job in the video department of Keller Williams Realty. The Cauthens reside in Pflugerville.

Shawn Cauthen developed a desire to return to filmmaking on the side. Before Netflix vs. the World, he edited and produced another doc yet to be released called The Orange Years: The Nickelodeon Story alongside The Goldbergs creator Adam Goldberg. Cauthen wanted to turn Keating’s book into a doc, but Keating had already started on the project, and she asked if they could join forces.

“This documentary would not exist if it had not been for Shawn Cauthen,” Keating said. “I had done different interviews with a different crew.”

Although Netflix vs. the World documents the streaming service’s rise, Cauthen and Keating struggled at first to find a distribution company willing to sell the video to Netflix itself.

“We wanted it to be a journalistic piece,” Keating said. “We had distributors, but they were shy because it is the biggest streamer in the world. We were afraid people won’t take it because it’s about Netflix and Netflix won’t take it.”

Said Cauthen: “Everyone is afraid of Netflix. It’s like, are you afraid of your career? What if you [tick] Netflix off? Look, I have a great job. I have four kids and a beautiful wife. So be it. It’s not like I’m a big-time director trying to make the next big Marvel movie.”

But Cauthen is taking in the sweet smell of success.

He is directing a docuseries called Fan Level Midnight: Devoted to The Office, which tracks a doc crew unveiling a nationwide appeal to the 2005-13 NBC sitcom The Office.

And thanks to distributor Indie Direct, Netflix vs. the World — which was selected to show at the virtual Garden State Film Festival — is among the top 10 most viewed documentaries on Amazon.