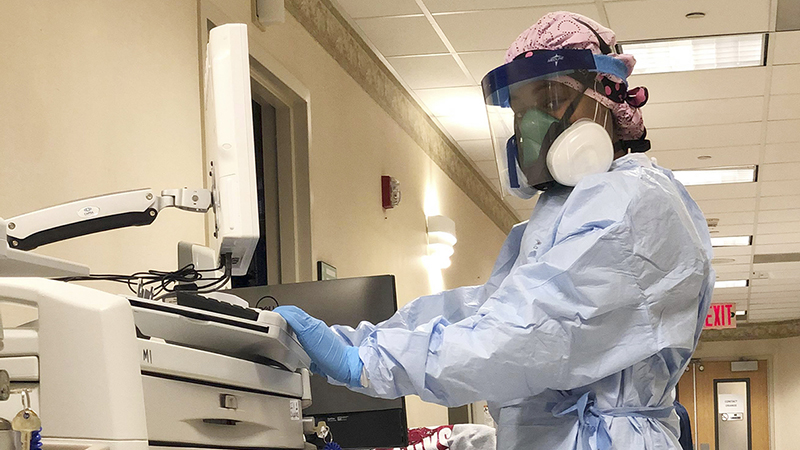 Tiffany Hatch is dressed in full gear while working on the frontline against coronavirus in New York. (Courtesy photo)

To brace itself for a battle against coronavirus, Texas was forced to put elective surgical procedures on hold.

The decision from Gov. Greg Abbott had a significant effect on Houston’s Memorial Hermann Hospital. 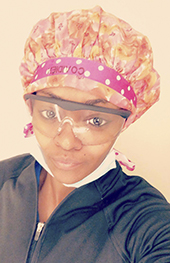 Hatch worked in the observation unit, where she saw that things were getting worse.

Hatch’s unit closed, but she could have floated to another area of the hospital.

Nonprofit emergency staffing firm Krucial Staffing, however, gave Hatch an opportunity to help nurses from across the country take on COVID-19 at the American epicenter of the novel virus — New York City.

Hatch has been working with COVID-19 patients at RIMC Hospital, a location that hadn’t been open for 10 years, on Roosevelt Island since April 16. The facility opened to assist with an overflow of patients. 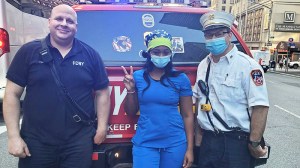 “When you sign on — we have to wait on a phone line — if you get in, you get in,” Hatch said. “When you get your deployment, you’re told to work 21 days straight. You can leave or extend.”

So did her newfound friends, Tiffanee Merritt of Southaven, Miss., and Nita Franks of Chula Vista, Calif.

“I’ve always been telling them the universe brought us together,” Franks said. “We’ve been here for three weeks, and it’s like I’ve known them forever.”

Merritt met Hatch when her flight from Memphis, Tenn., changed in Houston en route to LaGuardia Airport in New York. Both said they felt a little bit of uncertainty.

“Initially, I did feel not really scared but unknowing about what to expect,” Hatch said. “It’s not scary being a nurse. If you do what you do, you do your job, it’s not scary. It’s no different. Even if we’re protecting ourselves, you do what you do with any other virus. It’s just this one is attacking more quickly.”

The coronavirus, Hatch explained, is taking people out quickly, within days and weeks at a time, but she’s not afraid to be with so many infected patients at once.

“You have to treat them like you are positive, because some people may not have symptoms and be a carrier,” she said. 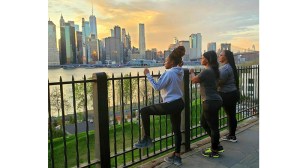 Hatch and other nurses face a challenge with having the proper personal protective equipment each day.

“That itself is a pandemic to regown a gown each day,” she said. “You cluster your care because you don’t want to run out of PPE. It’s there, but it’s not there. It’s not like it’s at hand. It’s like PPE is golden, and it’s like counted for. They’re giving us one N95 mask to have for five days, unless you get it saturated. Due to the pandemic, they allow us to have certain things, so we bring our own things. I’m not going to delay care because I don’t have the right PPE.”

But the women agree they work in an environment where each nurse is helpful and taking care of each other.

Break from it all

Hatch, Merritt and Franks each took an opportunity for a “mental day” 14 days into their assignment, giving them a chance to recuperate from the daily intensity of fighting COVID-19.

“We used it to look at the city,” Hatch said. “I’ve never been to New York, so what I see now, it’s really sad. No one is on the streets.”

The flipside of the break is positive interaction with a band of sisters.

“At work, it can be so easy to focus on the negative, people being sick and not able to be around loved ones,” Merritt said. “It’s good that your fellow nurses can be there and be the air beneath your wings. It would be impossible to complete 21 days with no one being there. Your body can do whatever you think it can do, but if your mind is like, ‘It’s too much,’ it can be overwhelming. I’m grateful to partner with Tiffany and my other friends.”

Said Hatch: “God always surrounds me with people on my same energy, and we bond just fine.”