MARY MEAUX — Source of fires needs to be known 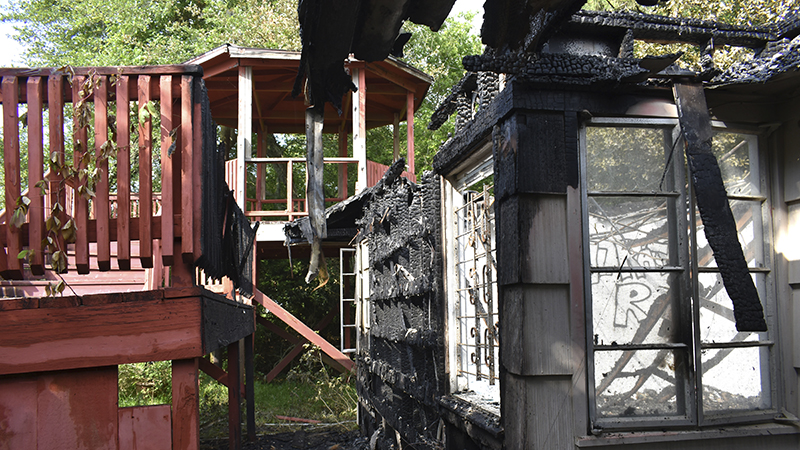 An area between the main house at 101 Gifford Pond Drive and a set of steps and elevated gazebo show extensive fire damage. (Mary Meaux/The News)

The recent fire at a once well-known home at 101 Gifford Pond Drive came almost four months after a fire destroyed an apartment building at the historic Eddingston Court.

The two sets of properties are expansive and sit adjacent to each other along Procter Street. They’ve each also sat vacant for a number of years allowing brush and weeds to become overgrown and vandals a chance to make their marks with graffiti.

Port Arthur Fire Marshal Paul Washburn said recently there is nothing to conclusively show the two fires are related, though both are in the same area and both were vacant structures.

The Eddingston Court fire occurred in January. Early on there was talk of three males believed to be white, although one could have been Hispanic, seen running from the scene. They were said to be wearing white T-shirts and blue jeans and looked to be in their early-to-mid-20s.

Eddingston Court was once the focus of postcards and a focal point along Procter Street for its fence created from 6,000 conch shells imported from the Cayman Islands by then-owner and tugboat captain Ambrose Eddingston.

Eddingston Court was listed in the National Register of Historic Places in 2004.

The two-story apartment buildings, as well as a main house on the site, had been vacant for years and had been the site of graffiti, vandals and squatters.

The Gifford Pond home with brick façade still had signs of its once opulent splendor. But a closer check showed a red tag from the city of Port Arthur, and a small pond and fountain held algae-filled water.

The main fire damage was visible from the left side and rear of the home. A wooden walkway, rotted with age, led to stairs and ultimately a gazebo overlooking the seawall and the Intracoastal Canal, but a look to the other side showed the massive damage from the fire that started outside the home, crept up the walls and into the attic and roof.

Washburn said at this point it is not known if this fire was intentionally or accidently set.

Intentional or not, these two homes are part of the city’s history. Let’s hope that no other homes, historical or not, are lost.

Persons with information about these fires are asked to call the fire investigation hotline at 409-983-8715.