EOC coronavirus testing at airport to cease May 15, transition to local control 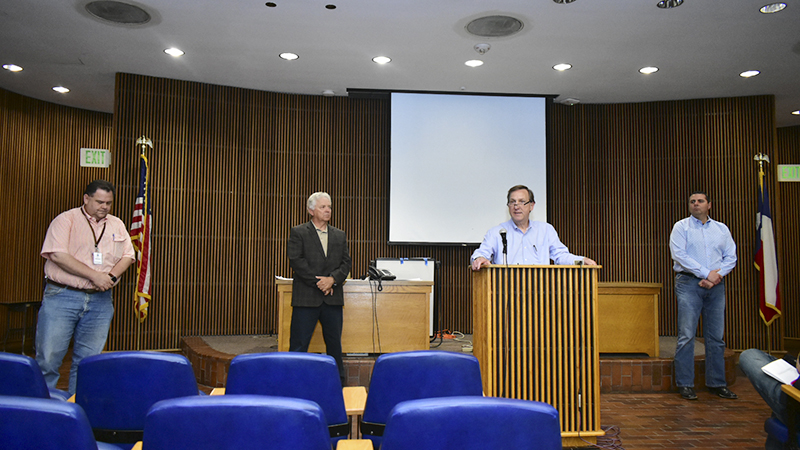 BEAUMONT — May 15 is set as the last day for the six-county Southeast Texas Regional Emergency Operations Center to operate coronavirus test centers at Jack Brooks Regional Airport and in Silsbee.

The center, led by each of the county’s judges, will transition testing services to city and county health departments.

Port Arthur Health Department Director Judith Smith said her department is “definitely” working on a plan for testing to be done in the city. The department also serves residents in Port Neches, Nederland and Groves.

Testing, however, will not be conducted at the PAHD office in downtown Port Arthur.

“Our goals and objectives will be contact tracing,” Smith said. “We never did do the testing at the health department. We partnered with and worked with Jefferson County on doing that.”

The Emergency Operations Center, or EOC, itself will continue to monitor efforts to combat the novel virus, but Jefferson County Judge Jeff Branick said nothing indicates the need to “jump back to action.”

The phone number for the call center, 409-550-2536, will still be operable, but calls will be transferred to local health authorities. The call center is open from 8 a.m.-5 p.m. weekdays, and those who call after hours are asked to leave a message with a name and phone number.

“We want to test more people, and we want to identify those people who need to be in quarantine, who are sick, may not know that they are sick or have the virus but are asymptomatic,” Branick said.

The EOC’s decision has been made after it reached a goal of testing 1 percent of citizens in the area. For Jefferson County, 1.3 percent have been tested, almost exactly the same ratio as for the six-county area.

“The EOC has met all the objectives it set out to perform,” Branick said. “On April 27, 2020, Gov. Greg Abbott set a goal for each county to test at least 1 percent of the population. Our six counties have reached that goal.

“We’re hopeful we get closer to the 2 percent number by the end of next week.”

Through Tuesday, the call center has fielded 6,811 calls. Since its establishment March 24, healthcare workers with the EOC have tested 4,555 patients.

No one involved with the EOC operations have tested positive for coronavirus, Branick said.

Jefferson County Health Authority Dr. Cecil Walkes said his mobile unit would travel to smaller communities including Sabine Pass to reach out to citizens for testing. Dates for those stops have yet to be announced.

Branick said as test kits become more widely available, those would be shipped back to the private sector. The temporary testing site at the Bob Bowers Civic Center in Port Arthur reached its limit of 100 Wednesday.

Shipping tests back would have no effect on the availability of testing in Port Arthur, where city leaders are pushing to have more citizens checked for coronavirus.

“Since about the first week, we’ve always had as many test kits as we needed,” Branick said. “We never exceeded our capacity. We never had to turn anybody away. We tested, and then we opened it up to people who were asymptomatic. We never turned anybody away. We’ve been able to meet the demand for testing throughout the event, so I anticipate those test kits are going to be more widely available, and that anybody who wants to be tested can. We have tested everybody from Port Arthur who’s called us.”

Branick also pleaded for plasma donations to Baptist Hospital in Beaumont. The donations will be used for treatment of severely and acutely ill individuals fighting COVID-19.