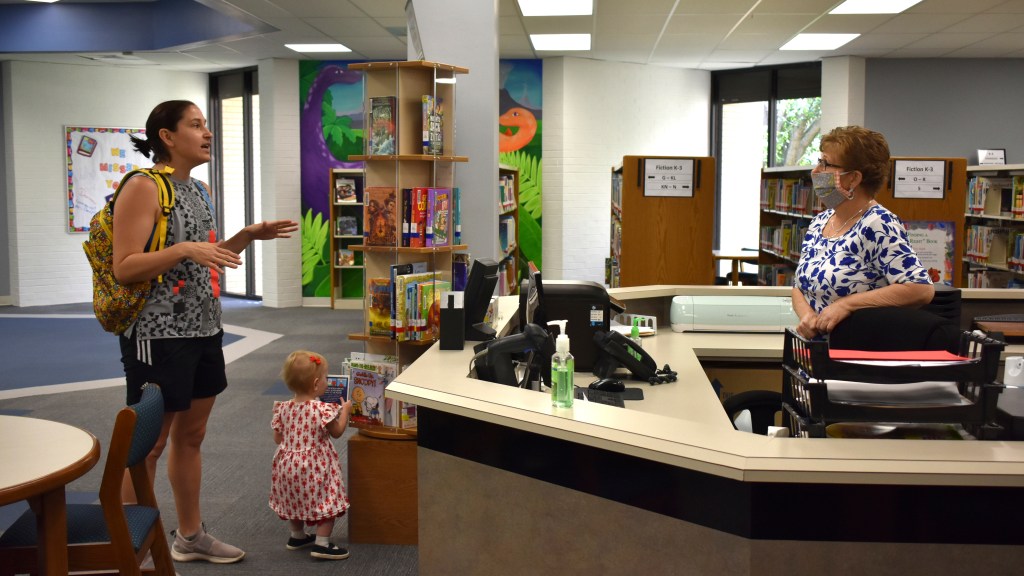 PORT NECHES —The doors are officially open at the Effie and Milton Hebert Public Library — five months after the explosion at TPC Group severely damaged the building.

“We missed our public as much as they missed us,” library director Mark Durham said. “It was always a little heartbreaking when people would ask us when we would open, and we had to say, ‘We don’t know.’”

The new and improved library, located at 2025 Merriman St., has been repaired and given a facelift; a new mural adorns a wall in the children’s area painted by Brandi Thomas, a part time employee, and the reference area appears more spacious due to remodeling. 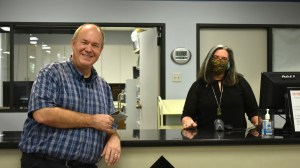 The Oleksy family marked some milestones on Monday while at the newly opened library — baby Emmy marked the first time she walked into the building on her own. Her brother Maverick was celebrating a very recent birthday and brother Crockett was excited to be there.

“They love the library and kept asking when it would open,” mom Amber Oleksy said.

Maverick strode into the room and told children’s programs librarian assistant Carolyn Bedwell that he is older because he had a birthday.

“This family is here all the time during the summer,” Bedwell said between chatting with the excited children. “The hardest thing is not to be able to hug on them.” 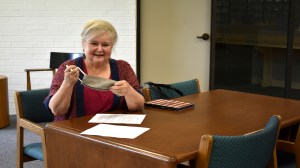 Mary Ann Carrier, former director of the Hebert Public Library, takes off her mask for a photo. She said that every day that the library was closed she thought of the people who needed that library, especially at this time. (Mary Meaux/The News)

The last day the library was open was Nov. 26 — the explosion was on the morning of Nov. 27. The cleanup and remediation began almost immediately, and in the meantime Groves and Port Arthur libraries reached out with offers of assistance.

The fall children’s program was held at the Groves Public Library, as well as other programs.

“Port Neches loves those events,” Durham said. “We didn’t see a drop in attendance, though it was miles away.”

Then along came COVID-19, which put a stop to gatherings so the programs went on online. 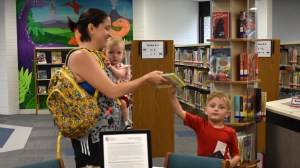 Amber Oleksy, left, holding Emmy, grabs a book from son Maverick at the Effie and Milton Hebert Public Library in Port Neches on Monday. This marked the first day the library was open in five months. (Mary Meaux/The News)

And while there are a lot of unknowns as to the openings of other establishments in the state, Durham said the library will have its summer reading program, albeit without group events such as performances, but the kids will still receive recognition for reading progress.

“We are in the process of exploring other online events,” he said.

Another issue the library faced during all of this was the discontinuation of the library consortium that went down on Feb. 7. 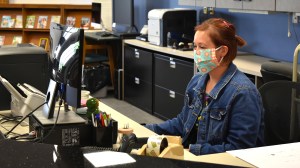 Durham said the library staff is constantly sterilizing, cleaning and wiping down everything that is touched, and items returned are quarantined for three days before being wiped down and re-shelved.

Social distancing is also being practiced in the library, which is open with 25 percent capacity at this time.

Library services are back with book, DVD and audiobook checkouts, computer usage and printing, information service, study space and more.