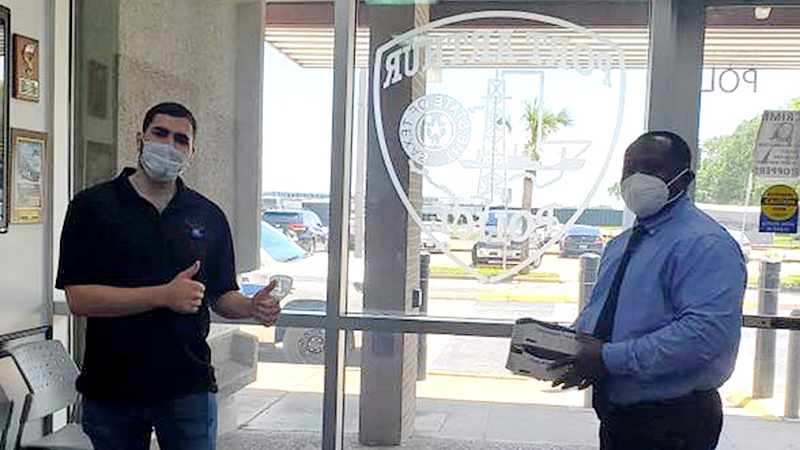 The folks are Royal Furniture are doing their part to support those on the front lines of the COVID-19 fight.

Tareq “Freddy” Shalabi and his brother Ray have been making donations to entities such as the Port Arthur Police Department, The Medical Center of Southeast Texas and Gulf Coast Health Center, to name a few.

“When you open Facebook or look at the news, you hear people talking about the shortage of masks and protection,” Freddy Shalabi said. “I had a friend who started selling masks and I bought as much as I could from him and donated them to the medical centers and the cops.”

The businessman said those receiving the masks have been very excited and happy about the donations.

Port Arthur Police Acting Deputy Chief Jeremy Houston is seen in one photo on Royal Furniture’s Facebook page as he accepted the box of masks in late April.

Police Chief Tim Duriso said the department appreciates Royal Furniture looking out for the officers and the opportunity to get something that at that time was difficult to obtain.

The brothers became owners of the business seven years ago and said they have seen a lot of support from the community, adding approximately 80 percent of their customers are people who live close to the store.

“They always told me they have other furniture stores they purchase from in other cities, but they want to support local, and for those reasons we want to give back and support as much as we can,” Freddy said.

Ray Shalabi said it feels good to give back to the community, because without support, they would be nothing.

Royal Furniture, located at 4221 Gulfway Drive, is open for business under slightly reduced hours, from 10 a.m. to 6 p.m. Monday through Saturday. Previously the business was open on Sundays.