STEPHEN HEMELT — Let there be light at Doornbos Park 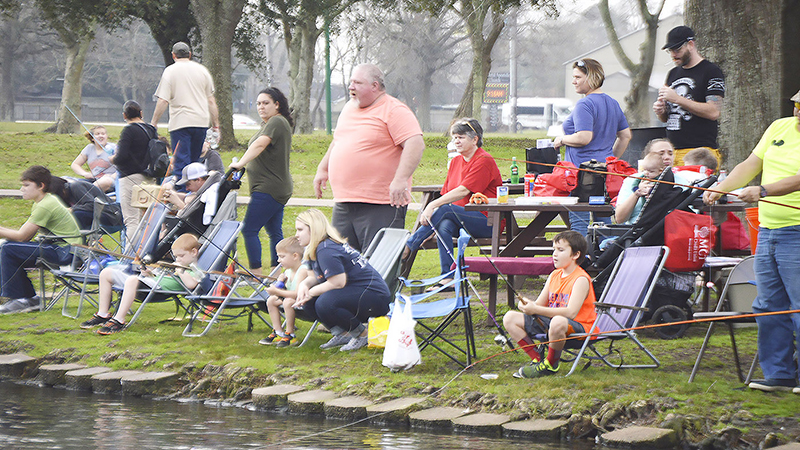 Participants line Doornbos Park to participate in “Hooked on Fishing, Not on Drugs.” (Mary Meaux/The News)

The city action ends an installation project that installed 30 LED lights along the park’s walking trail and at the front of the park.

City officials have long said lighting was a major issue, especially in the rear of the park by the baseball field. It was a particularly dark area at night.

“The project is done,” City Manager Christopher Duque said. “I think it is a huge improvement for the park system. That’s part of our commitment to the quality of life in this community, and we are going to continue to improve that park system for our residents.”

The city’s park system was a huge saving grace for community members looking to get out during the days of forced quarantine. While benches and playground equipment were roped offed in March and April, the city made the open spaces of local parks available for individuals and household families to escape after weeks stuck indoors.

The Doornbos Park Lighting Project also improved the longevity and safety of previously buried electrical wires that had not been safeguarded in conduit and buried shallow.

That was something the city almost found out the hard way when performing concrete replacements on park sidewalks.

In December, Nederland City Council members voted unanimously on a new set of hours for all city parks. The reduction in hours followed an increase in violent crime reported in November, where separate incidents in Doornbos Park included two people shot and an assault on a patron walking with a service dog.

With the new ordinance in place, Police Chief Gary Porter said violators face a misdemeanor charge if found in the park after hours.

In addition, authorities said officers increased patrols in and around Doornbos Park.

Kudos goes to the leadership at Marion & Ed Hughes Public Library in Nederland, which is launching curbside service on Monday (May 4).

The details are published in The Port Arthur News today and have been shared at panews.com.

An abundance of caution and protocol has been put in place to prioritize the safety of patrons and staff members.

Being able to serve the community is clearly a passion of Director of Library Services Victoria L. Klehn, who said the large-scale curbside effort is a first for Nederland.

Once a full reopening has begun, Klehn said a modified curbside approach would remain for residents who still don’t find themselves comfortable.

“I know we have some seniors who may feel uncomfortable,” Klehn told me this week. “I mean, my dad is 80 years old, and I worry about him going out, running errands and things like that just because he is in that age group that is high risk. I am sure we have some patrons in the category who would feel more comfortable doing curbside. We’ll keep it going for a little while during that process as they get acclimated to everything and start feeling more comfortable with being out in public again.”

There is definitely inconvenience and some aggravation when it comes to everyday life under the threat of COVID-19. We applaud those who continue to make good faith efforts to serve others.

Stephen Hemelt is the publisher of The Port Arthur News. He can be reached at 409-721-2445 or stepehen.hemelt@panews.com.