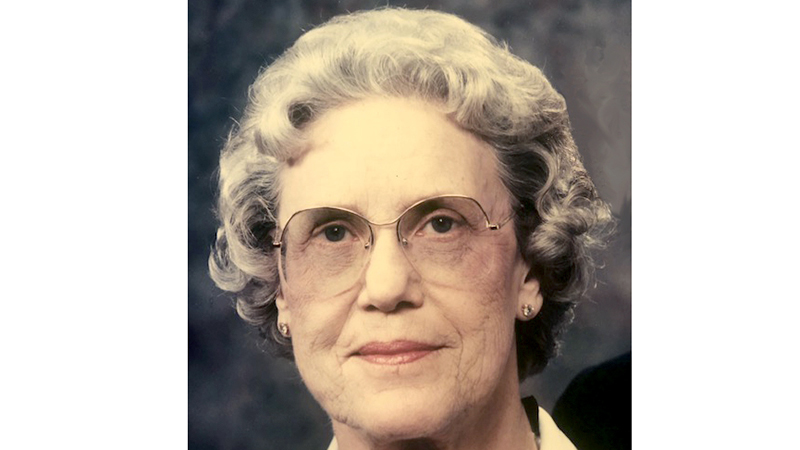 Norma Lucille Newman Watkins, age 100, a child of God by faith, died peacefully in her sleep on April 25th, 2020 in Houston, Texas.

She was born on December 8, 1919, in Holyoke, Colorado, to Jefferson Joseph Newman and Beulah Reed Newman of Palisade, Nebraska.

As a child she was a lively little girl who helped her family in their store by candling eggs, making butter, bringing in firewood and doing other chores.

She loved school and could often be found reading library books with a friend.

In high school she played the flute in the band and was a cheer leader for the six man football team.

Norma loved a good football game for the rest of her life. An excellent swimmer, she earned her Red Cross Life Guard certification one summer and also taught swimming classes.

She especially enjoyed teaching a class for older ladies, some of whom later became her relatives by marriage.

At high school graduation, she was awarded a full scholarship to Kearney State Teachers College.

She worked during the summers to earn money for her room and board and graduated with a degree in Home Economics.

She married her beloved Kenneth Ray Watkins in her parents’ garden in Palisade, Nebraska, on July 6, 1942.

Although their families had been friends, Kenneth had not really noticed her until she spent one summer as life guard in his hometown of Grant.

He became the love of her life and they were a devoted and steadfast team until his death in 2012.

They were married almost 70 years.

Norma taught Home Economics for a year after her marriage.

She and Kenneth had three children by the time Kenneth was graduated from Kirksville Osteopathic College of Medicine in 1951.

The family moved to Texas that year and became proud residents of their adopted state.

She loved music, sang in the church choir, studied voice (in her late 40’s) supported the Port Arthur Community Concerts for years, and in doing so passed along her love of music to her children.

Norma was a very skilled quilter, loved horse racing and bulldogs, even learned to show one of her bulldogs in the ring.

She kept the books for Kenneth’s office, helped manage his busy medical practice and always supported her children in their many activities.

She was a lifelong Methodist, served on several church committees, and was a delegate to the Texas Annual Conference for several years.

She was active in the DAR, DAC, Port Arthur Antique Study Club, and P.E.O.

She and Kenneth loved travelling and visited many countries together.

Some of their trips were planned so she could conduct genealogy research while Kenneth golfed.

She is greatly missed.

Preceding her in death were her sisters Doris Newman Chatfield and baby Alma Newman.

Her family is grateful for the loving and compassionate care “Miss Norma” received at Colonial Oaks Memory Care and Blue Bonnet Palliative Care.

Burial will take place in Grant, Nebraska. A memorial service will be held later in the summer.