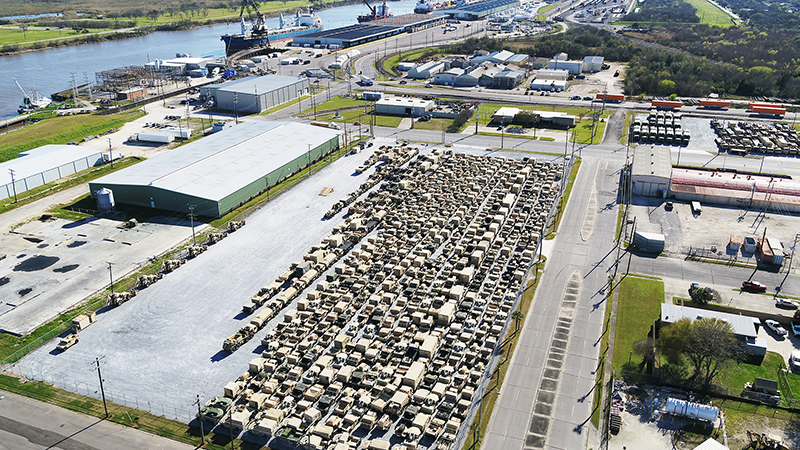 The Port of Port Arthur, which handles cargo in support of billions of dollars of local industrial expansion, recently developed land near it to support these various requirements.

“Whether measured by the number of people working or the ton moved, we had the busiest day in the port’s history,” Port of Port Arthur CEO Larry Kelley Jr. said. “Every dock was occupied with a working ship. Four docks, each with a vessel moving cargo. With it came new challenges, parking for 140-plus longshoremen, dozens of soldiers and many trucks.”

That was a busy day, one where the team at the port was up to the challenge. Making all that happen takes people, according to Kelley, who said one of the keys to the port’s strength are the men and women working each day.

Benjamin Green, Longshoreman Union No. 25 president, helps provide the labor force to accomplish whatever task a stevedore is needed for at the port.

He credited Kelley and Director of Trade Development Anthony Theriot for seeking out bond issues and aggressively pursuing cargo opportunities to bring in work.

“At one particular time, work had begun to drop off,” Green said. “We are very appreciative of what the port has done. They are very proactive, so our members can have jobs. By them doing that, it has helped us out tremendously to bring in new labor. The thing is, if you don’t keep the work here, the labor is going to go elsewhere. We’re fighting against other industries out here, like the refineries and jobs of that nature. It’s hard to compete with those industries if we don’t have work to keep labor going.”

Green credited union members, lauding their “know how,” saying skills have been passed on from generation to generation.

“We are also very hands-on with the new people who come here,” Green said. “We want to show them the right way to do things. We take pride in what we do. Your labor speaks for you. We have safety programs in place and get new guys certified on the particular cargo or machinery they operate. That goes a long way to helping the production and safety of our operation.”

Green said the region’s major industrial operations try to pluck talented longshoremen to high-paying jobs, but adds many stay on to make a career at the port.

“They’ve learned skills here that have helped them get that next level job they wanted,” he said. “We’ve also been able to train people to where they have wanted to stay and provide a good living for their families.”

The local union hall is located at 321 Shreveport Ave. in Port Arthur and represents the warehouse and and ship unions. Those interested in potential opportunities are welcome to stop and visit. 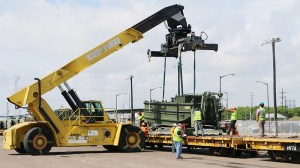 Steady action at the Port of Port Arthur is nothing new. The venue, on Feb. 25, recorded the busiest day in port history.

Activity at the Port of Port Arthur is nothing new, and Kelley noted those driving by might say it resembles a well-defended military post more than an industry-based town.

There are 17 ports designated Strategic Seaports by the U.S. Department of Transportation, Maritime Administration, and the Port of Port Arthur serves in the nation’s defense as one of three such Texas ports (Beaumont and Corpus Christi are the others).

U.S. Army Lt. Col. Gordon Vincent leads the 842nd Transportation Battalion, which is home ported in Beaumont and has a strong partnership with the Port of Port Arthur, one of four strategic ports in the Gulf of Mexico.

The 842nd Transportation Battalion moves Department of Defense cargo through the Port of Port Arthur, and Vincent said Port Arthur is a great partner, “especially over the past year in support of a very large exercise going into Europe.”

“They work very closely with us,” Vincent said. “They have been a tremendous advocate for our support with the community. Really, the biggest thing in the partnership is the strong relationship we have built through the years in order to project the combat power we are able to project through the Gulf. Port Arthur is really a key component to being able to do that.”

The Battalion manages the strategic seaport operations moving cargo out of and into seaports.

“Port Arthur is huge for us,” Vincent said. “We appreciate all they do for us. It is a very flexible organization that absolutely supports us in every way. They never tell us no. It’s a really good thing.” 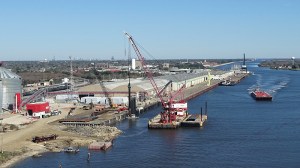 The talented membership of Longshoreman Union No. 25 help supply the labor that drives activity at the Port of Port Arthur.

To meet the needs of the military or other roll-on/roll-off cargo, the Port requires a considerable amount of laydown space.

Port Arthur must be able to service project cargo that supports billions of dollars of local industrial expansion. In recent months the port has developed land near it to support these various cargos.

“In meeting with military planners, we determined if the port is to play a significant role, there was a need for increased cargo-handling space,” Kelley said. “As a response, in recent months the port has acquired and stabilized a modest amount of land near the port. It is a great move that has created jobs and allowed the port to pursue other cargos, as well.”

In terms of jobs, Kelley said the land development is producing an incredible return on investment, allowing for port diversification and a way to strengthen the port and community

“With increased volume and cargo diversity, the port is a busy place,” Kelley said. “The significant increase in cargo volumes has created a good problem for the port — a shortage of space inside the port, while balancing an active $37 million construction project and dock expansion.”

With the growth and cargo diversification, the port is embracing shifts in customer logistics strategies. While still maintaining traditional rail-to-ship moves, customers also need their product moved by truck.

To support that effort and expedite truck turnaround, some of the laydown space will be used to allow truck drivers to drop an empty trailer and pick up a loaded trailer and go, Kelley said.

“This aspect has many benefits of reduced congestion, reduced vehicle idling and spreads out the arrival rate,” Kelley said

According to Kelley, strength and leadership are often determined in times of challenge, “no doubt with COVID-19 we will have some headwinds”:

“With that many thanks to the strength of our people: Longshore labor, contractors, the lengthy list of local businesses helping make the port great, the board of commissioners and, of course, port staff.”

STRENGTH: Texas State Optical evolves along with field of…