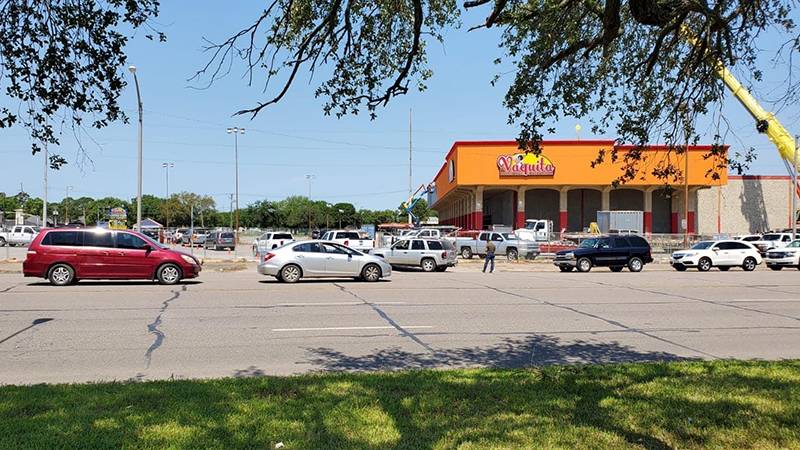 Long lines of cars could be seen receiving the free meals given by La Vaquita Meat Market and Mike’s Furniture on Tuesday. (Courtesy photo)

(Editor’s note: This is one of a series of stories published this weekend in Part 4 “STRENGTH” of The Port Arthur News’ 2020 Vision For Success series. The series appears each weekend in April and can also be read at panews.com.)

Their development of the old Market Basket at the corner of Jefferson and Gulfway Drive in Port Arthur is continuing, and the pair believes the hardest challenges in developing the property are behind them.

“Right now in the phase of construction that we’re at, we pretty much finished all of our underground infrastructure,” Pena said. “We’re going into the next phase of starting to cover up the walls. Pretty soon — we think in the next 30 days — we should start prepping for the new parking lot.” 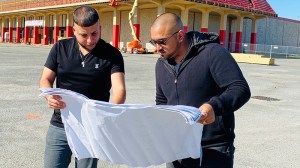 Both attended Thomas Jefferson High School, now a middle school, next door, and remember seeing the building languishing unused for 20 years. It has been only recently that the opportunity to purchase the property arose, giving Pena and Aref the chance to revitalize the community.

“We were very fortunate to get it, because there were other people trying to get it as well,” Pena said. “We were just real fortunate to land this investment, and like we said previously, we thought that it fell in the right hands.”
So far, the nearly 50,000-square foot roof has been renovated, with new air conditioning units in place, and plumbing infrastructure has also recently passed inspection.

The pair has begun working on revamping the exterior, as well.

“As you can see on the outside, we started with our stucco trying to give it a new face lift,” Aref said. “We’re getting there, we’re moving pretty quickly.”

Much of their work is being made possible with help from the City of Port Arthur and Port Arthur Economic Development Commission. 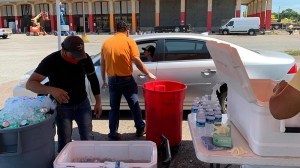 La Vaquita partnered with Mike’s Furniture to provide free meals to the community in the parking lot of La Vaquita’s new upcoming location.

“We couldn’t have made this huge investment if it hadn’t been for the help of the city council and the EDC,” Pena said. “The EDC approved us for an incentive and they’re also helping us with waving some tap fees and permit fees. So if there hadn’t been that extra help that we’ve gotten and that we’re going to get from the EDC and the city council, I don’t think this would be possible.”

All told, Aref and Pena expect the project to come to a $3.5 million investment.

There’s also been a little giving on their side as well.

“We’ve done it every time we get something that’s going on in town, like Hurricane Harvey,” La Vaquita owner Carlos Uriostegui said. “We always try to help out the community. We do a lot almost every year, especially when we get this kind of issue that we’re having right now with COVID-19.”

This time, the community response was phenomenal.

“The turnout was amazing, it was more than expected,” Uriostegui said. “With Harvey, we probably did about 500 people. It was amazing on Tuesday.”
Uriostegui plans to do more in the near future. He’s also looking forward to the time when La Vaquita will finally move across the street to its new location.

“We’ve been open for about 14 years in the old location, and it’s too crowded,” he said. “There’s not enough space right now, so I’m so excited about moving across the street. Hopefully we will in about three months in July. With this virus, that’s going to make it tough, but we’re trying hard. It’s going to be done.”

Aref and Pena are very hopeful.

“We are taking extra precautions,” Aref said. “We do have sanitizers at the property for everybody to use, masks for our contractors to use. It hasn’t slowed us down any, but we are taking precautions and keeping it a safe environment for everybody.”

With La Vaquita as the big draw, Aref and Pena are working on some promising leads for other possible tenants, including an herbalife store, a phone repair shop and a boots and western wear store.

“What we’re hoping for is that this will basically revive that part of the neighborhood,” Aref said. “It’s been an eyesore in that community for 15 years and it’s a shame that it sat that way for so long. We’re hoping now that it’s a convenience to that part of town. Now they have a nice grocery store to go shopping at.”