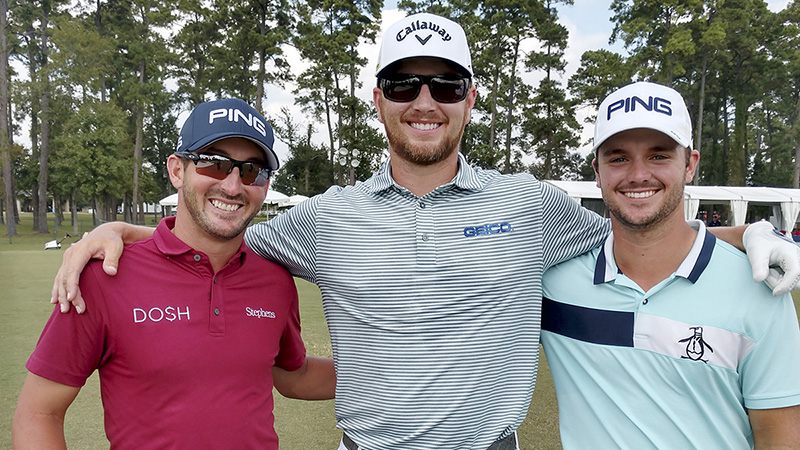 Much as they want the PGA Tour’s revised schedule to kick off as planned June 11 at Colonial Country Club in Fort Worth, Port Neches-Groves exes Andrew Landry and Chris Stroud are somewhat skeptical.

“I hope I’m wrong, but I just don’t see it happening,” said Landry, who was having a solid season when COVID-19 concerns shut things down after the first round of the Players Championship last month. “There are still so many questions involving testing.

“In my mind, when they sent out the new schedule last week, that was them communicating when they want to go. Maybe in the next few weeks things could get a lot better, and they can iron out some of the testing issues. One thing that would really help is if the tour could provide charter flights, so we could avoid airports.”

The testing will be the key, said Stroud, who added he has a lot of faith in commissioner Jay Monahans.

“He and his people are doing a great job, but it is going to come down to the testing and to players feeling safe,” Stroud said. “From what I’ve heard, some of the top players say they won’t play without an antibody test.

“All I can do is start working on my game and be ready on June 11. I want to play. We all do. The worst thing that can happen is if we start up and somebody comes down with the virus or there is a carrier who is unknowingly spreading it. That could shut it down for a good while.”

For at least the first four tournaments back – Colonial, the RBC Heritage at Hilton Head, the Travelers Championship in Connecticut and the Rocket Mortgage Classic in Detroit – spectators will not be allowed.

Players, caddies, tournament officials, TV crews and immediate family are the only ones who would be permitted on the grounds.

Speculation has it that anybody involved in a tournament in any way might have to be tested on a daily basis.

“We’re going to need rapid-response, large-scale testing,” said Monahans. “Another issue will be the optics of the PGA Tour having access to onsite testing while some areas of the country struggle to provide service for residents.”

Digest that statement alone, in the context of all the questions about nationwide testing, and it’s easy to see why a June 11 restart for the PGA Tour is hardly a lock.

Landry and Stroud, meanwhile, both used the word “weird” in terms of what it would be like to play without galleries. They did it in junior golf, high school, college and on mini-tours, but that was many rounds and millions of dollars ago.

“It’s going to be tough, going to be a big adjustment,” Landry said. “I thrive on the fans and love the excitement, the emotion and the noise. It would just be so weird, for example, to be fighting for the lead the final day at Colonial, make a 15-footer to win and nobody cheers or screams.”

“It will certainly be different and just really weird,” he said. “Tournaments won’t have the same feel. Everything will be more laid back. It may bother the guys who consistently draw big galleries more than those of us used to a small following. Those guys may feel like it’s boring.

“I just want to play. But above all, I want everybody to be safe.”