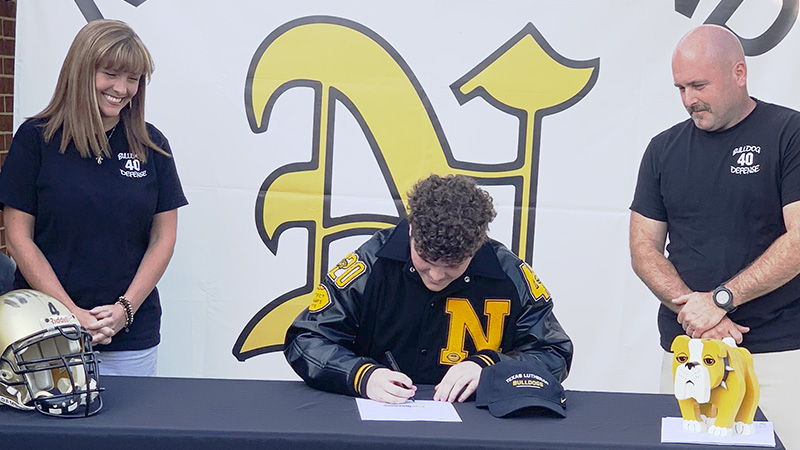 Mika Weaver of Nederland signs a letter of intent with Texas Lutheran University in his backyard as his parents Shonda and Mikal Weaver look on Tuesday. (Courtesy image) 4-14-20

If Mika Weaver didn’t play another down of football, the Nederland High School senior would have been fine with that.

“In the beginning of March, I was up and down, and I finally decided I wasn’t going to play football,” he said. “I’m sitting at the table with my parents, and I tell them, ‘I think I’m done.’ Bulldog football was something I wanted to do, and anything else was just icing on the cake.”

Then at 9:45 that evening, Weaver estimated, he received a call from Seguin, a university town south of Austin.

“I look at my parents and I say, I think God is trying to tell me something,” Weaver said.

It was Jody Ford, outside linebackers coach and Nederland alumnus. 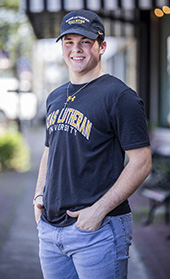 “He called and explained where he’s from and said he would like to have me come visit,” Weaver said. “I thought, I don’t think I have a choice. God told me where I’m going.”

The black-and-gold Bulldogs identity, similar to Nederland’s, along with Ford’s call, might have been just the signs Weaver needed.

The coronavirus pandemic has forced the Nederland Independent School District to shutter its campus doors and require students to continue their studies remotely, but it didn’t keep Weaver from signing a letter of intent to compete at TLU on Tuesday.

Nederland’s coaching staff responded by holding a ceremony for Weaver at his home with the usual signing day treatment: a usual white banner with the words “Nederland Bulldogs” and calligraphic “N” in the background, his golden football helmet and wooden Bulldog paperweight.

“It was really cool,” Weaver said. “It was nothing less than what I expect of the coaches at Nederland. That’s just how they treat their students. They go above and beyond.”

It’s also not the first time Nederland head coach and athletic director Monte Barrow has felt the impact of disaster on his program — or the entirety of his department. The start of his first season at the helm, 2017, was interrupted by the impact of Hurricane Harvey, and a portion of the District 22-5A schedule had to be staggered into games on school nights.

“Seniors are losing enough, not getting everything they expected to get along the way as seniors,” Barrow said, in reference to usual spring school activities. “Anything we can do to make someone’s day special, we’re going to do it. This is one of those times normalcy is a good thing,” Barrow said.

Nederland ISD officials announced Friday that campuses would remain closed through May 28, citing an amended order from Gov. Greg Abbott. In a statement, the district said it is “currently working through plans for the remainder of the school year in regards to events, retrieving personal items, etc., as we receive guidance from the Texas Education Agency.”

The University Interscholastic League had not yet solidified plans for the resumption of spring sports competition at the time.

“The kids are talking with baseball, softball and soccer coaches,” Barrow said. “The kids are doing what they can to try to stay involved, hoping that it’s there. That’s all any of us can have right now. I think the kids are mature enough to know what’s happened. We’re not, we being the UIL or the district, going to put them in harm’s way.”

Weaver said he feels bad for his classmates who are in spring sports just waiting for a chance to compete.

“I feel bad for them,” he said. “I hope they get to come back for two weeks or a month. It sucks not knowing if they get to have a season their senior year.”

TLU is an NCAA Division III institution, meaning the university does not grant athletic scholarships. Weaver, who plans to major in sports medicine and minor in business, has an academic scholarship to the school.

Scholarships, however, weren’t an issue.

“Once God kind of told me that, I didn’t put money into it,” Weaver said. “I just had to go. No bigger call than this.”

At one time, Weaver considered walking on at Texas State University, a Division I program. But being a maroon-and-gold Bobcat wouldn’t have been the same as being a black-and-gold Bulldog, something TLU could offer.

“Nederland football just means more than anything else,” Weaver said. “You’re playing for the city, the school, for anyone who ever wore black and gold. I couldn’t imagine it being the same anywhere else.”

Meanwhile, Weaver finds ways to say in shape, running laps in a “decent-sized” backyard, doing pushups and sit-ups, and performing box jumps on a tree stump.

Without a gym open, Weaver got creative with his weightlifting routine.

“I found a metal pole and put a cinder block at the end to do squats,” he said.

If Weaver has roamed the halls of Nederland High for the final time, he sees the flip-side of a fluid situation in spending as much time with his family as possible.

“It’s hard, but you fight to live another day,” Weaver said. “I guess it’s day-by-day. I enjoy the time I got at school and at home.”