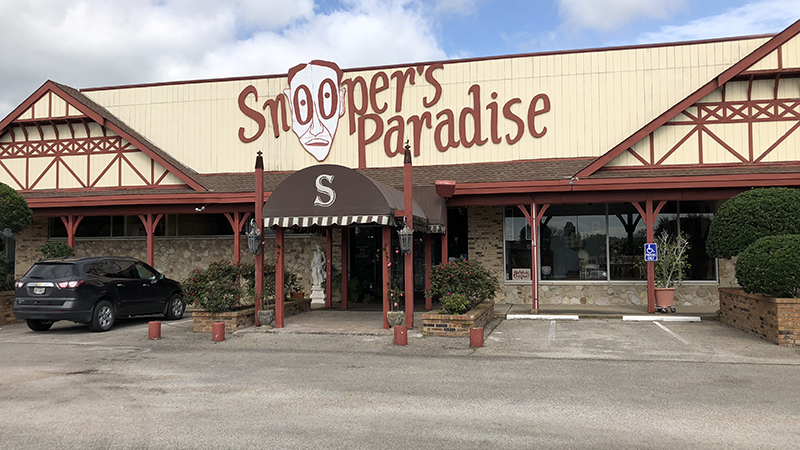 GROVES — After 68 years, Snooper’s Paradise must be doing something right.

“I don’t know how smart we are, but we’re still in business,” second generation owner Jon Hampton said.

The sprawling store, with room after room of carefully arranged antique furniture, is a place that brings items filled with European history to American homes. Jon and his wife Terry Hampton pick the best pieces they can find from European estates and homes to bring back something that just can’t be found in a modern furniture store.

Jon became interested in antiques after his father opened the store in 1952, selling secondhand furniture. He expanded his search for furniture across the Atlantic into Europe, first in the United Kingdom and then into France, Belgium, Denmark, Germany, Italy, The Netherlands and, even occasionally, into China.

Jon and Terry travel to these places, make arrangements with translators, drivers and packers — especially packers, who are most important, Jon says — to find enough pieces to fill a shipping container to take back home. 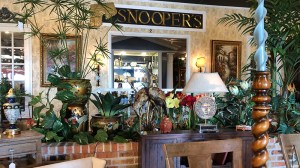 The store is loaded with antique and antique-adjacent furniture. (Brad Robichaux/The News)

The process is not always easy, Terry said.

“It’s not hard but it’s not a piece of cake either,” she said. “But when you love what you’re doing, it makes it even less difficult.”

Much of the appeal found in the antiques comes from the sense of history many of the pieces possess. It’s this sense that first attracted Byron Broussard.

“If that furniture down at Snooper’s could talk, I would love to know their history,” Broussard said. “A lot of the Flemish pieces have carvings on them, and those pieces were designed and built for a particular family or a particular castle. The carvings tell a little bit of history or something that the family does as a business in the carving.”

The retired civil engineer claims to know the store better than even Jon or Terry, and he has good reason to, since he’s had a hand putting together and designing each of the many arrangements at the store, 509 E. Parkway St. in Groves. 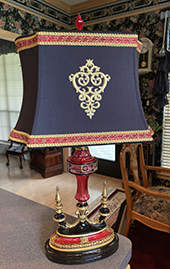 Byron Broussard refurbished this lamp, including new wiring, and new paint. The glass color was changed from amber to red.

“I’ve touched every item in that store, every picture, every lamp, every rug, every accessory piece in placing it,” Broussard said. “That’s something that I’ve always been blessed with. I’ve always been really good with colors, and people tell me I have a photographic mind. I can visualize a room, and then in my mind think about the things we have, and just start pulling.”

Three times now, Broussard has had to redo all of the store’s arrangements, twice in the aftermath of Hurricanes Rita and Ike, and once after a roof fire in 2017. It took four months to finish the arrangements after the fire.

“They sometimes can’t locate something in the store, and they’ll call me at home and they’ll ask me where it might be,” he said. “I guess that’s just part of the photographic memory, I just know where things are.”

Not everything in the store is necessarily an antique. With changes in the market, Snoopers has been acquiring pieces with newer styles, while preserving the unified aesthetic so carefully arranged among the antiques. While younger shoppers might not be quite as into antiques as their parents, Snooper’s is making inroads with their tastes. 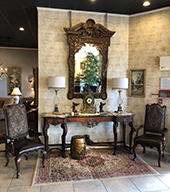 The mirror in the right upon entering the store is a reproduction of a piece from the Althorp Estate in the United Kingdom. The two lamps on the table were refurbished by Byron Broussard.

“There’s a big spectrum between traditional, which has kind of gone by the wayside with young people, and modern things that we don’t import, so we’re trying to hit that group of people but with good quality pieces,” Jon said. “Everything we do is good quality.”

Often times Terry finds what they want is something unique to their tastes.

“We go to the high-point furniture market, which is the biggest market in the world for furniture, and we buy mainly things that would complement the older things, like reproductions,” Terry said. “[Younger customers] don’t want what their grandmother had. We still have young people, young professionals especially, who will come in and don’t want a house-full, but they want a few select pieces just to accent what they have.

“They don’t really want portraits like most of their parents 20-40 years ago. Now they want something that reminds them of something in their life, like a painting of a location they went to.”

Among the reproductions that can be found at Snoopers are pieces from the Althorp Estate of Charles Spencer, 9th Earl Spencer, the brother of Princess Diana.

The reproductions, downsized a little from their originals, are crafted in Vietnam by Theodore Alexander, a furniture-making company. 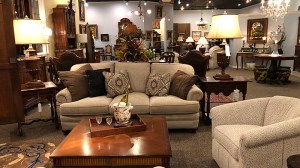 The sprawling store has room after room of carefully arranged furniture.

Even Broussard is contributing to Snooper’s stock of newer pieces by refurbishing lamps.

“It’s hard to find lamps to go with this antique furniture,” he said. “So I bought some old lamps and redid them, rewired them, refinished them, put new shades, put trim on the shades to match the lamps so it would look like the period of the furniture. They allow me to sell them in the store, and I’ve been selling those for probably close to 20 years. I do make some lamps from scratch.

Preserving their antique aesthetic is still core to Snooper’s philosophy.

“We’re trying to bring in new pieces that will appeal to a younger group but we still stick with our core business, the traditional,” Jon said.

“You always have to change to be able to stay current, but in the same light you’re not going to walk in the door and see an industrial piece of furniture just sitting there,” she said. 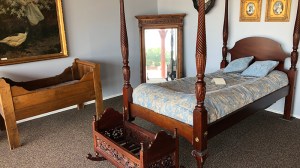 Pieces from all over Europe find their way into Snooper’s Paradise. Byron Broussard has helped arrange all the rooms in the store.