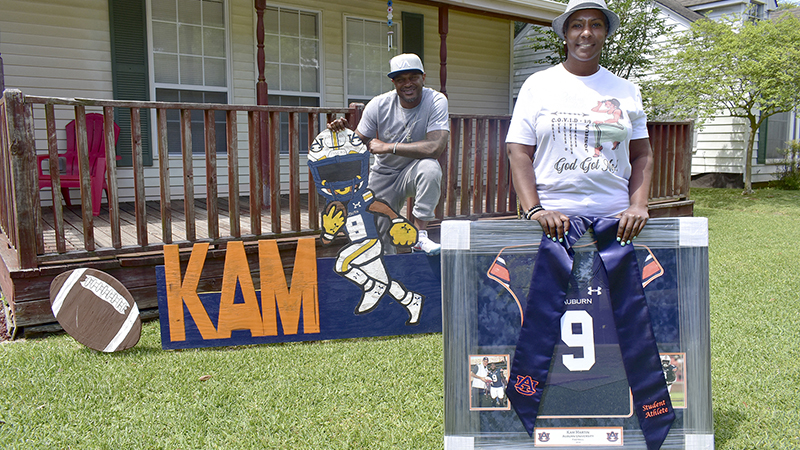 On a Wednesday afternoon as picturesque as a sunny football Saturday in the South, Marion Harris relaxed in the living room of her Port Arthur home with ESPN’s NFL Draft coverage blaring on the flatscreen.

A day had passed since the 42-year-old mother of recent Auburn University graduate and running back Kam Martin posted a testimony on Facebook about her recent battle with coronavirus. Tuesday was also the 14th day since she received her diagnosis.

The married mother of two — she has a 16-year-old daughter, Harlee, as well — said friends also cooked for her family.

“I’m not ashamed of it, because first of all, I don’t know where I picked it up from,” she said.

She does remember making fun of her husband Howard, 43, because he wore a mask at the Atlanta airport.

Said Howard Harris: “I was like, ‘Uh-huh.’ That was basically it. I was in the room and it was in the news about the COVID-19. We went to Atlanta, [and] Alabama, then went to Atlanta and drove back to Alabama.

Howard Harris, who was recently laid off from a liquefied natural gas plant construction job in Hackberry, La., gave Marion and her cousin some face masks from work during the travel. He wore one on the plane as well as some gloves.

Still, Marion could not pinpoint where coronavirus impacted her.

“I really can’t say where I got it from, but I want people to know the virus is real,” she said. “You know what I’m saying? I’m not faking it. I was sick. I don’t wish that on anybody.” 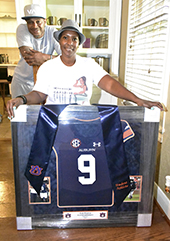 Howard and Marion Harris pose with their son Kam Martin’s jersey and graduation sash from Auburn University inside their Port Arthur home.

It was the same day Martin participated in Auburn’s Pro Day, an agility combine where professional football scouts are invited to evaluate potential draftees. Martin played four years for the Auburn Tigers, and helped them earn a 9-4 record last season and a trip to the Outback Bowl in Tampa, Fla.

Martin rushed for 1,564 yards and eight touchdowns for his career mostly in a backup role, but he averaged more than 5.5 yards per carry. (He achieved a career-best 7.3 yards-per-touch in 2019.)

“The next week, my friend had a 50th birthday party in Houston,” Marion Harris said. “So, we celebrated in Houston. Then, we came back and actually in Houston that weekend we went, they were shutting down a lot of stuff. We did a lot of different things. We came back and then went back to work as normal on the 16th.”

She started to feel bad on March 19. Four days later, she called her primary care physician, but learned the doctor’s office was not taking any new patients.

“We did a phone visit, but I didn’t have a thermometer, so I had to try to find me a thermometer because everywhere, they were out,” Harris said.

Harris then went to an urgent-care clinic on FM 365 and was tested for the flu. Doctors told her she had a viral infection and gave her antibiotics.

“The next day, I lost my sense of smell and taste,” she said. “I was having chills and I was still feeling bad. Well, I called the hotline [to screen patients at the Jack Brooks Regional Airport drive-thru clinic], and I told them my symptoms. [The receptionist] told me, ‘Well, it sounds to me you have an upper respiratory infection. You wouldn’t qualify to be tested.’”

Harris then read about a “new” symptom for coronavirus on Facebook — loss of sense of smell and taste. She called the hotline again and reported that symptom, asking if she could be tested. She was declined again, being informed the Centers for Disease Control and Prevention did not confirm the symptom.

Once Harris received a thermometer, her temperature reading was 99.7. Normal body temperature ranges from 97.7 degrees to 99.5 degrees.

Harris reached out to a friend at the Port Arthur Health Department about her symptoms and was sent to the drive-thru on March 27. Four days later, she received a positive COVID-19 confirmation.

But on March 28, Harris went to the emergency room at CHRISTUS St. Elizabeth hospital in Beaumont.

“That morning, I woke up, and my fever was like 101,” she said. “I could barely breathe. I was having breathing trouble. When I went to [St. Elizabeth], they did me a chest X-ray, and they said it looked like my chest X-ray had pneumonia. They at the time wouldn’t let anyone come, so [Howard] had to drop me off.

“When they got the chest X-ray back, they said, ‘We’re going to have to bring you back to possibly admit you and run some IVs and stuff like that.’”

Marion Harris was informed she probably had COVID-19 at the time, but doctors decided against keeping her at the hospital, fearing the facility might make her sicker. She was sent home to isolate and take Tylenol while waiting for results.

The doctor-issued quarantine expired on April 12.

“The whole time I was going through this, I was like, ‘God, just heal my body. I just want to be healed, OK?’” she said. “I knew maybe I had the symptoms, but when [the health department official] called me back and gave me the test results, the first thing she started doing was asking me my timeline of where I went. I said, ‘Ma’am, do I have it?’ She said, ‘Yes, you have it.’”

Harris answered that she had been in the house quarantining, taking hot showers and drinking hot liquids.

“I started feeling a little bit better each day and each day got better for me,” she said.

She got her sense of taste back about two days after she received her results.

Asked whether she felt her life was in jeopardy, Harris said: “Yes and no. I stayed prayerful. I wasn’t really scared until I went to St. E that Saturday, when my breathing was funny. That’s when I kind of got scared.”

Martin, who graduated from Memorial High School in 2016, has not seen his mother since the Pro Day visit, but has kept in touch with her and gave her encouragement. 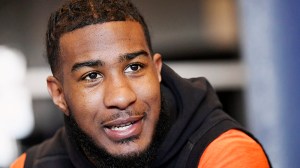 “I was like, when she was telling me that she was sick, I was telling her she was good,” Martin said. “And then, they ended up telling me she had it. I just tried to, like, make sure she was straight by trying to give her all that she needed to knock it outside of her.”

Howard Harris made his assists at home while keeping perspective on his wife’s ordeal.

“I’m a person of, ‘It is what is’ and ‘Go with the flow,’” he said. “I believe you let go and let God. I prayed through the whole process and just took care of whatever needed to be cared of. Basically, I had to step up my skills in cooking and stuff like that, keep food on the table. We had to stay away from her. She was quarantining in the other room.”

On this Wednesday afternoon, Marion Harris felt healthy, just wanting to know when she could return to her job in the call center of Gulf Credit Union. At the time she fell ill, she was not exposed to any members because she did her job by phone. 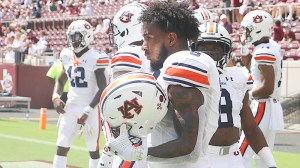 Auburn running back Kam Martin warms up prior to a Sept. 21, 2019, game at Texas A&M. (Michael Sudhalter/Special to The News)

The NFL Draft is scheduled for April 23-25. Instead of staging a presentation at a large venue as usual, the league will conduct the draft virtually as a precaution against COVID-19.

SportsTalkLine.com projects Martin will be drafted in the sixth round. Whether the NFL or college football seasons will begin on time is hard to call.

“To be honest, nobody knows,” said Martin, who’s staying and working out in Houston with an aunt. “Nobody knows what’s going on. You’ve just got to be ready so when you get there, you can be ready. A lot of guys, they’re at home. Some guys are probably doing nothing, so you’ve got to be ready and be in tip-top shape.”

All Martin wants at this point is an opportunity to show what he can do.

“I’m just trying to be laid back and let it happen,” he said.

Neither Martin nor his parents have a watch party planned, but Howard Harris is simply looking forward to seeing his son going to the next level.

“It’s a good feeling. It’s a blessing,” Howard said. “It’s also anxiety, you know? Like I say, at times when Kam would be in those games, I would feel like I was in those games. I was more scared or nervous than him.”