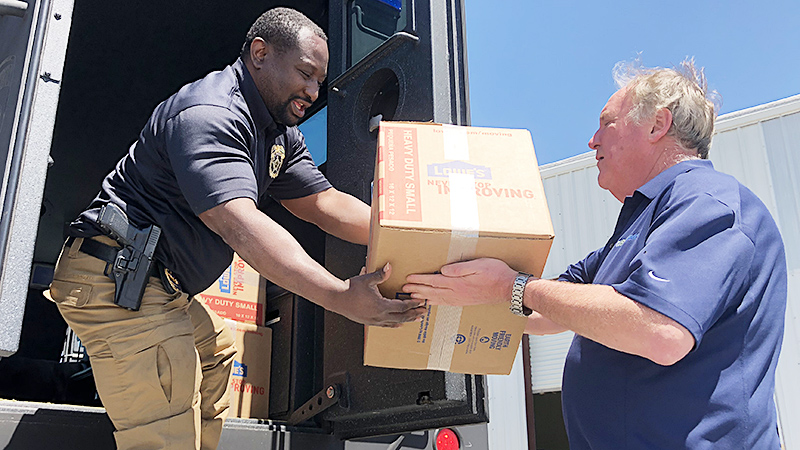 Since the first batch was shipped out in March, production of hand sanitizer at EcoWerks, a Port Arthur recycling company, has continued to this day, as has the contributions of owner Michael Laws’ support and supply networks.

Those who receive the fruits of this labor of love are much appreciative.

Each member of the fire department received two bottles — one for the office and one for the family — but there was enough left over that the department was able to pass on supplies to citizens they’ve come into contact with.

They’ve even dropped off some boxes of sanitizer at nursing homes.

“We went over there and we filled up,” Miguez said. “I had several of my guys over there, and we took up 700-800 bottles of hand sanitizer for our guys. Michael Laws donated all this stuff to us. Hand sanitizer is in short supply right now. 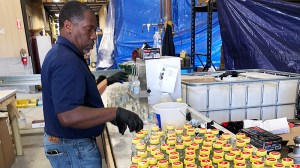 Port Arthur Police Officer Al Gillen was there to pick up some of the first batches produced by EcoWerks and worked to get the much-needed supplies into the hands of departments in Nederland, Groves, Port Neches and Beaumont, as well as the Texas Department of Public Safety.

“Michael reached out to the fire department and first responders about making his own hand sanitizer locally,” Gillen said. “We went down there and met him, and he seems like a great guy and a really personal person. He made enough hand sanitizer for the whole police department — every officer in the building and civilians.

“It was nice that a local vendor made this stuff locally to where we wouldn’t have to source it from somewhere else, and it was 100 percent donated.” 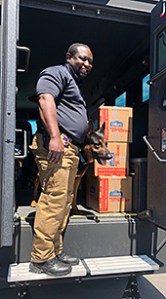 The recipe for the sanitizer is no secret.

Laws said his group is working off of recommendations from the World Health Organization and the Food and Drug Administration for making homemade hand cleansers, which consists of sterile water, hydrogen peroxide, glycerol and isopropyl alcohol.

Chemical materials are provided by Bluebonnet Petrochemical Solutions, and at prices before the sanitizer ingredients became in such high demand. In turn, EcoWerks is passing savings on to their customers, selling their sanitizers now at a price that’s just enough to cover costs and to purchase more materials.

“We were just initially giving it way, but people started saying, ‘No, don’t just give it to us. Sell it to us and then buy more so you can keep doing this,’ since this is not going away,” Laws said.

“A gallon of ethanol-based hand sanitizer is going anywhere from $80-$120 to as much as $300. We were selling it to the medical centers for around $30. It covers our overhead and it covers our people. It keeps my people working and it lets me buy more materials.” 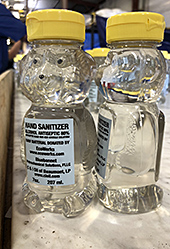 The bottles EcoWerks is using for their hand sanitizer were originally made to bottle honey.

Donovan Weldon of C&I Oil in Beaumont is a longtime friend of Laws’, and when Laws called him up to help with producing hand sanitizer, Weldon readily agreed.

“Michael’s always been contributory to the community, and he asked us if we would jump in and help them with support for that endeavor,” Weldon said. “We contributed the labels. Our guys spent hours setting up the conference room table, putting the labels on the bottles. We delivered them to Michael, he would fill them up and we would participate in dispersing them. We’ve been donating them to hospitals and first responders, and we just sent 32 of them for ER nurses in New York City.”

“He called me early one morning and I told him, ‘We’re in,’” Drago said. “That man works hard. He’s put a lot of stuff together, and it’s grown into a pretty big operation. He had all the assets, connections and called in all the people he knew could handle what he wanted to do. And that’s what he did.”

Those people are still working in the endeavor.

EcoWerks employees are helping as well, adding their own long hours to the production process.

“When we said we were going to do this, we’re guaranteeing everyone 40 hours, so they work their eight hours, then clock out and scrub the floor, sanitizing for this project,” Laws said. “A lot of guys have put in 100 hours.”

Donations are still being sent out too. The Port Arthur Police Department drove one of its armored vehicles to EcoWerks on Thursday to pick up boxes containing 210 8-ounce bottles of sanitizer.

Those who may get their hands on these small bottles will notice they’re bear-shaped. With other bottle shapes in short supply, Laws noticed honey supplies at supermarkets were still plentiful and managed to get the suppliers of those honey bottles to send him some for his own product.

The entire process requires great effort and coordination, but everyone involved seems to be more than willing to give.

“The morale of our people has been incredible because there’s so much fear,” Laws said. “People feel like they can do something. It’s been a really good exercise.”