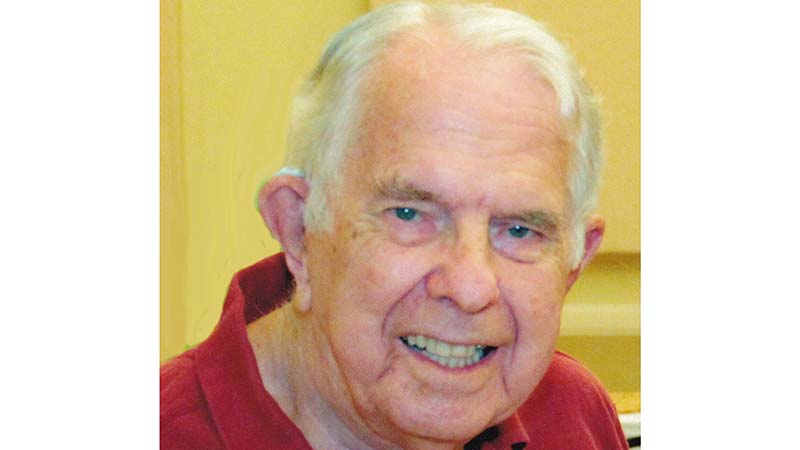 He was 91 years old and lived a long, fulfilling and abundant life.

Dick was born in a “dog run” style house with no electricity or plumbing in rural East Texas on the cusp of the great depression.

His family moved to Longview, TX when he was a child, where he was raised in the Elmira Chapel Cumberland Presbyterian Church of Spring Hill, was a proud and active Boy Scout, and graduated from Longview High School.

Dick attended the University of Texas at Austin where he met the love of his life and future wife Martha (Marty) Ann (Eastman) Castleberry, and then transferred and graduated from North Texas State College.

After graduation Dick took a position in the Drafting and Design Department of the Gulf Oil Corporation Port Arthur Refinery.

He served Gulf Oil for 37 years before retiring in 1989 as a Lead Design Engineer in the Engineering Design & Standards Department of what was by then Chevron Corporation.

After retiring Dick and Marty moved to Austin, TX.

Dick was a very active member and Elder of First Presbyterian Church of Port Arthur and a member of the Griffing Park Lions Club.

His main focus and service was working with Boy Scout Troop 82, where he was an Assistant Scoutmaster, drove the Scout bus, and supervised monthly weekend camping trips.

Also, Dick completed the BSA Woodbadge Training for Adult Leaders, was a member of the Order of the Arrow, served as an adult advisor on a trek to Philmont Scout Ranch (which he had attended himself during the summer of 1944), and shepherded his three sons through their Eagle Scout journeys.

In retirement in Austin, TX, Dick was an active member of Covenant Presbyterian Church where he served on a member based maintenance team, was a long term greeter on Sunday mornings, and was involved with various adult groups of the church. Dick volunteered weekly at the Manos De Cristo pantry, annually attended the Life Time Learning programs at UT, and went on numerous travels with Marty including a few trips to Europe.

He also regularly attended the Austin Lyric Opera and enjoyed UT sporting events. But his main focus in retirement was enjoying, playing with, and being in the presence of his grandchildren.

Dick was a unique and caring soul.

The interests he pursued throughout life were varied and wide ranging.

At times in his life he was an architect (drafting and designing the house he raised his family in), a photographer with his prized Nikon camera always at hand, a great fan of the opera and classical music, and a lover of the outdoors, the culture of the southwest, and its mountains.

Dick had a very curious mind, enjoyed history, and was an avid reader.

His passion for his beloved Longhorns was well known.

However, Dick’s overwhelming love was for his family.

He was truly inseparable from his wife and life partner Marty from the time they met in college.

As a father he was ever present in his son’s lives, and was always ready and available in a time of need.

Dick’s life revolved around his family.

Whether leading his family on annual trips and adventures throughout the country in their camper, enjoying the quiet outdoors in a family cabin on a lake in deep East Texas, attending too numerous to count events of his sons and grandchildren, or merely sitting down with his family for every meal, Dick was always there and present for his family.

Dick was preceded in death by his wife Martha Ann, and his parents Lillian and George, 2 siblings and a grandchild.

He is survived by his sister Mary Lea Baker, three sons, Kirk, David and Michael, 4 grandchildren, 1 great grandchild, and several nieces and nephews.

A memorial service will be held when appropriate at a future date.

In lieu of flowers, the family requests that people make donations if they wish to Manos De Cristo (manosdecristo.org).

Arrangements by Weed-Corley-Fish Funeral Home, Austin, Texas – (512) 452-8811. Remembrances may be shared at www.wcfish.com.