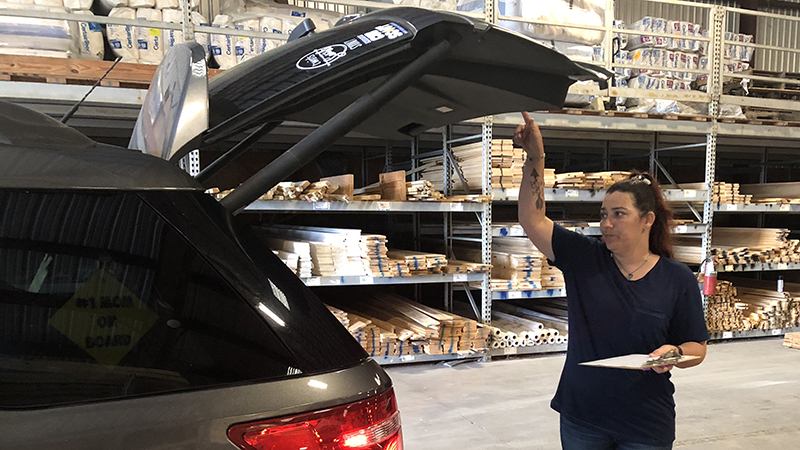 Carie Hebert checks to make sure paperwork is in order and the customer has lumber. (Brad Robichaux/The News)

(Editor’s note: This is one of a series of stories published this weekend in Part 2 “POWER” of The Port Arthur News’ 2020 Vision For Success series. The series appears each weekend in April and can also be read at panews.com.)

Considered essential services, stores like Ritter Lumber in Nederland, are open for business, and such businesses are helping power a boost to construction and home-improvement projects as people stuck at home look for things to stay busy.

Stephen Brentlinger, Director of Marketing and Human Resources, said the continued business Ritter Lumber has seen is possibly helped by the stay-at-home orders issued to slow the spread of the coronavirus.

Contractors who are working also need supplies, and there’s no shortage of work to be done in Mid-County and beyond.

“What we’ve found is that there’s two different lots with the retail customer,” Brentlinger said. “One of them was a lot of people in this specific area are still impacted by the [TPC Group facility] explosion, and there are even some flood customers still left over. We’ve got a ton of people who are still putting their homes back together, and if anything, they’ve got a little more time now to repair their home damage.” 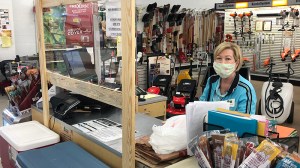 Cheryl Neel wears a mask made for her while her register is protected by a plate of Plexiglass.

Only five customers are allowed inside the store at a time, and Plexiglas panes have been set up at registers to protect customers and cashiers.

Customers are also asked to stay in their vehicles while traveling through the lumber barns.

“If you had told me a year ago that in 2020 we were going to have a pandemic and we were going to have to limit five people in our store and push things to curbside to where people call over the phone and come pick it up, and that we could actually see an increase in sales, I would not have believed you,” he said. “That’s what we’re seeing right now.”

Savant said Ritter Lumber is still sending out frames, house packages and slabs as people take advantage of down time to do work on home improvement projects or new construction.

He said the Beaumont and Nederland stores, both of which have drive-in lumber barns, have seen some of the busiest weeks of business recently. Even though the stores see an increase in home-improvement projects at about this time every year, Savant expects there’s a little bit of a bump from the stay-at-home circumstances.

“On the lumber side of the business, I don’t know how else to put it other than that it’s rocking along pretty well right now,” he said. “It just goes to show that people are trying to stay busy, that people who can work are still working and the people who are stuck at home are trying to do what they can to take their mind off the situation they’re in.” 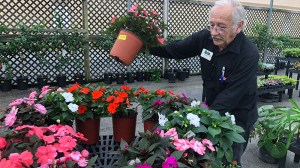 George Lemaire places flowers on display in the gardening section at Ritter Lumber.

If not on the house, folks have been turning to gardening, Savant said.

Sales have also shown a boost for mulch, potting soil, plants and vegetables of all kinds.

“There’s a lot more of it going in than I would have assumed with the stay-at-home orders put in place,” Savant said. 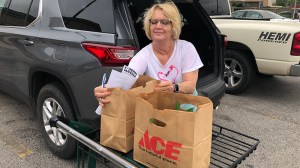 One timely innovation has been the introduction of curbside pickup.

Customers can call in ahead to request items, then come to the store, park and call to let the store know they’re there. Store employees bring orders out to them.

Ritter Lumber has been offering curbside pickup for three weeks.

“It’s brand new,” Savant said. “It’s something we designed and developed pretty quickly, so it’s kind of a low-fi version of what you’d get a Walmart or H-E-B, and we designed it specifically for the pandemic to allow for a safer option for customers to come and shop. In some cases, some customers might find it’s a little more convenient, which is an extra little win there.”

The service has done well enough that Ritter Lumber is thinking about upgrading it once the pandemic subsides.

“In our meetings and talks we have, we’re kind of taking it day by day,” Savant said. “Once this is all behind us and settled down, we plan to keep that in place, build on it and make it better than what it is currently.”

Supplies are still plentiful for nearly everything, except face masks and some cleaning supplies. With suppliers devoting their stock for health care providers across the country, Brentlinger says he doesn’t know when the store will receive a new shipment of masks for painters and construction workers.

Several employees have taken to wearing masks made for them by friends.

As an essential business though, Brentlinger says Ritter Lumber is able to keep all of their employees working.

“Since so many people are still doing projects, remodeling their homes and repairing the plant explosions, we have all employees still employed,” Brentlinger said. “It’s been a blessing, and that’s our goal, to keep everybody working.

“We’re used to being crazy after natural disasters where it’s all hands on deck, and we did not expect that from this. When this started, we didn’t expect to be as busy as we are and for people to be as understanding as they are.”