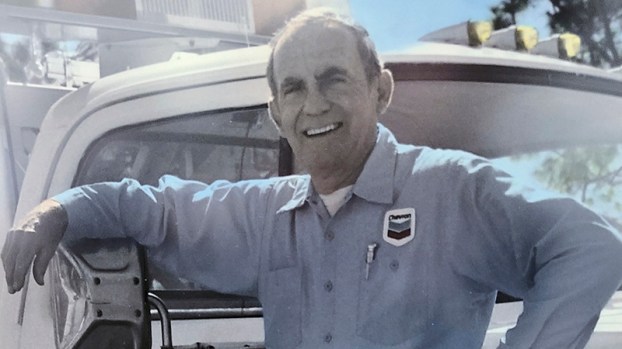 He owned and operated Cowboy Hall Service Station & Wrecker Service on Gulfway Drive (the Port Arthur drag!) for 34 years; he sold his business and retired in 1990.

Always generous, Cowboy’s business was a gathering place for his brothers and friends; and provided jobs for many of his nephews throughout the years.

A veteran of the Korean War, he proudly served his country. Cowboy was also a lifelong area resident and a faithful member of Grace Baptist Church (formerly Central Baptist Church of Port Arthur).

He was a member of the Cosmopolitan Lodge 872, 32nd Degree Scottish Rite.

He was a Mason for 57 years and was a recipient of the Golden Trowel Award in 2012.

As one of sixteen children, Cowboy enjoyed being part of a large family.

His wife, Dolly, was truly the love of his life; together they treasured time at their Crystal Beach house with their children, grandchildren, and great-grandchildren.

With heightened health and safety practices due to the Coronavirus, precautionary measures are being taken.

A graveside service will be held at Greenlawn Memorial Park, under the direction of Clayton-Thompson Funeral Home in Groves, TX with David Thompson officiating.

It will be limited to immediate family to maintain restricted attendance and social distancing.

The family will not be receiving visitors at this time due to the virus, but phone calls or cards would be appreciated.

Serving as pallbearers are Cowboy’s grandsons.

The family extends their appreciation to Cathy Gohlke, Adrienne Cooper, Amanda Okonkwo, Elizabeth Guidry, Felicia Jones, and Harbor Hospice who provided the best care and quality of life possible to the very end.

Friends wishing to make memorial contributions in lieu of flowers may send them to Samaritan’s Purse (www.samaritanspurse.org).

This organization currently brings doctors, nurses, and other medical personnel to people suffering from the Coronavirus.