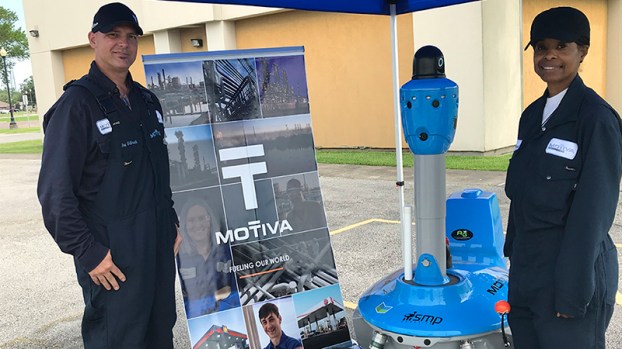 SMARTS: Motiva’s robot takes on the job of STEM outreach

Robots aren’t only for engineers to work on.

Joe and Kim Gilbreath, who are instrument, electrical and analyzer technicians at the Motiva refinery in Port Arthur, have a robot of their own. 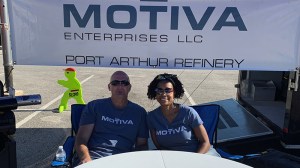 Joe and Kim Gilbreath enjoy reaching out to students about STEM careers available for skilled workers and craftsmen. (Courtesy photo)

That’s where the robot comes in handy.

“We found a security robot that they’ll put into parking lots,” Joe said. “We were actually able to purchase one and install gas detectors on it. So now instead of sending a person out to check, we can actually send the robot out and get a reading off the gas detectors.”

The robot comes in handy in another important way — inspiring the next generation to discover cool occupations in science, technology, engineering and math that they may not have been aware of before.

The Gilbreaths take the robot, named Little Mo, to events where Motiva reaches out to students and inspires them to pursue careers in STEM fields. 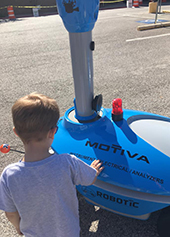 Children are encouraged to get up close to Little Mo and see how it works.

The Gilbreaths and Little Mo serve as one of Motiva’s best examples of the kinds of jobs available to anyone who may not have the means or opportunity to attend four-year colleges.

“We were always volunteering for opportunities with Verna [Rutherford, Motiva communications manager] and Motiva to go out into the schools, and we’re always following the engineering group,” Joe said. “We started looking at it like an opportunity when we go out to showcase what we do from a maintenance standpoint, having a skill and a trade rather than just a degree in engineering or process operations.”

Joe and Kim show off Little Mo to curious students and events for organizations like the Texas Alliance for Minorities in Engineering or the Youth Career Expo, taking the robot apart to show how it works, operating it while answering questions about their work.

It gives Joe and Kim the chance to show students what skilled workers and craftsmen can achieve.

“Yes, you’d need an engineer,” Joe said. “Yes, you need somebody with electronics to work on it, program it, design and build it. But you’d also need somebody like a welder or a mechanic or an electrician to work on this type of technology. That’s kind of the angle we come in looking at it. There’s a lot of automation and robots coming out, and technology’s growing by the day, but somebody has to work on these.” 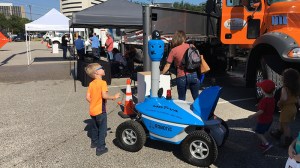 Little Mo, Motiva’s gas detection robot, inspires curiosity at the Touch a Truck event at the Beaumont Children’s Museum in 2019.

Kim says not all students are aware of the opportunities people like her, who attended Lamar State College Port Arthur, and Joe who went to a trade school, can find right here in the area.

“A lot of them don’t know,” she said. “When we were growing up we didn’t know a lot about all the crafts and things that we could do, and a lot of kids don’t hear of them. That’s why we like to go to the schools and talk to the kids about other things they could do.

“We’re trying to open their eyes to the things they can be and the different things they could do in life that they wouldn’t normally know about or wouldn’t be told about in school.”

Rutherford said Joe and Kim Gilbreath are effective representatives for Motiva and skilled craftsmen because they interact with the children directly.

“The young children are looking at them as role models,” she said. “They see a young lady that is able to do something that they don’t even understand. As Kim and Joe engage with these students, they talk with them directly about their background.

“I think that the interactions that both Joe and Kim have is so down to earth with the students, at the same time they’re talking and operating the robot so it’s so intriguing to those students. It’s a direct engagement and that makes a big difference with the little ones.”

Little Mo isn’t the only piece of technology that accompanies the Gilbreaths in their outreach efforts. The two bring other forms of portable technology, like solar-powered monitoring stations that help demonstrate better what it is that Joe and Kim do.

“We’ve gone and talked to students at Lamar before that have maybe taken instrumentation or they’ve maybe taken electronics, but they don’t really grasp what we really work on,” Joe said.

“We try to inspire kids to stay in school. STEM is a great thing, but we get them from a vocational standpoint instead of an academic standpoint. They need academics but there is a shortage of trained, skilled craftsmen, whether they’re welders, machinists, mechanics, electricians, plumbers. We’re trying to show these kids that those career opportunities are out there too.”