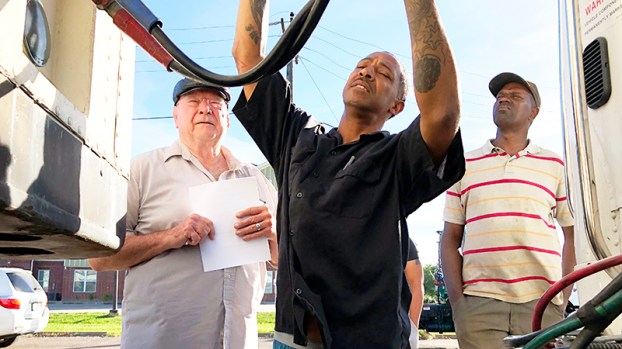 Not all well-paying jobs require four-year degrees. Some don’t even require two years.

Lamar State College Port Arthur offers classes for obtaining commercial driver’s licenses. In the present environment of campus closures and stay-at-home orders due to the coronavirus, demand for commercial drivers is sky-high, and the classes themselves continue unabated as essential.

Erskine Leysath, longtime instructor for commercial licensing, worked with Dr. Ben Stafford, dean of workforce and continuing education, to develop a CDL program on the Lamar State campus. Four years later, the class is continuing to pick up speed. 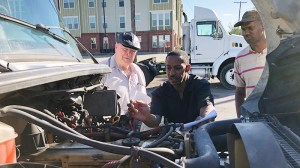 Delwyn Kiel goes through his inspection checklist for instructor Erskine Leysath while Jason Forward looks on during a commercial driver’s license class.

“Stafford was starting the CDL program on campus and asked me to assist in getting that program started, and I kind of resisted,” Leysath said. “I told him I was ready to be retired, but I agreed to help. It’s been a lot of fun, and I think we’ve helped a lot of people get a commercial license, which helps them get a job. That’s really the main focus of this program — to assist people to get jobs, have a chance to have a better life and assist our economy.”

The program offers training for Class A and Class B licenses.

The Class B curriculum lasts two months, while three months are required for Class A licenses in order to accommodate training in maneuvering larger, hinged vehicles.

Class A licenses are for drivers of hinged tractor-trailers hauling over 26,000 pounds. Classes for both licenses take place from 5:30 to 9:30 p.m.

Stafford said the program at Lamar State is also the only program in the area that can proctor third-party driving exams, allowing students to finish their courses and get their licenses much faster.

“We did that about a year and a half ago, because about three years ago Texas converted to where in order to test for commercial licenses, you had to go to a megacenter,” Stafford said.

“There are four megacenters in Houston and one in Livingston, so about 100 miles on either side of us, but that was very difficult to get students and the big trucks to those centers. We actually became a third party tester, and I’ve got two examiners who can examine students here and actually go into the DPS database and approve their license.” 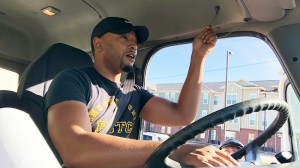 Patrick Cook, who is expecting to take his CDL exam next week, tries the horn on LSCPA’s tractor-trailer.

Leysath is one of those examiners.

Leysath spent 15 years partnering with Lamar State to teach CDL classes at the federal prison near Beaumont. When Stafford approached Leysath after his retirement about starting a program on campus, Leysath felt the need to continue working and giving back to the community.

“Being retired, I found out I needed something to do to keep me busy,” he said. “I also was hopeful that I could do something that would give back to the community a little bit. I’ve lived such a blessed life. That’s Ben Stafford’s point of view, too — to try to help people. I think we’re being pretty successful.”
Stafford insisted that, due to the high demand, anyone that obtains a CDL is almost guaranteed a job, and one with very good earning potential.

“At this point, to have the license is to have a job, period,” Stafford said. “Every school district in the area is looking for Class B school bus drivers and every company in this area is looking for Class B delivery drivers. Those jobs locally, you’re looking at full time work, starting at $19-$20 an hour with benefits. It’s amazing the demand in the market right now.”

Class A drivers can achieve even higher salaries, Stafford said. With a safe, reliable driving record and important endorsements for hauling certain products, Class A drivers could even earn up to six figures.

“We’re talking about training that takes two to three months to earn,” Stafford said. “We’re not talking about master’s or doctor degrees here.” 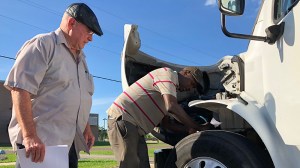 Jason Forward checks the tires of the tractor-trailer used for the CDL class while instructor Erskine Leysath observes.

Nandia Holmes graduated from the program and is currently hauling fuel with her Class A license. Her father was a truck driver and she’d always fostered an interest in the career. Lamar State’s program suited her needs in a way that made her interests possible to pursue. 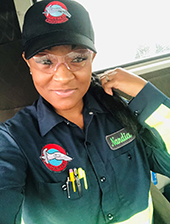 “I was one of those people who thought anything guys can do, girls can do too, so I’ve always wanted to do it,” Holmes said. “Being a single mom at the time with three kids, all of the other different trucking programs that I had heard about, they required you to go out of town or hours away from home for the training.

“I was talking to a friend of mine and they said, ‘You know, Lamar State as a CDL program that you can do during the week.’ I got on the website, immediately called and was signed up within a day.”

Though a little intimidated, not only about learning how to drive a standard transmission but also about large trucks, Holmes stuck with the program with the dedication of the instructors.

“I earned a job driving fuel tankers. I haul fuel making double in the year than what I was in my previous job.”

The Class A course costs $3,750 and the Class B course costs $2,150, both including the costs of taking licensing exams. Participants should be able to speak and understand English sufficiently to take the exams.

Beyond that, as long as the student is comfortable around machinery, those are the only requirements, Stafford said.

“Even for the kind of person who might not know much about mechanics but are comfortable around mechanics, comfortable in traffic and handling a vehicle, those really are almost the only qualifications I would make,” he said.