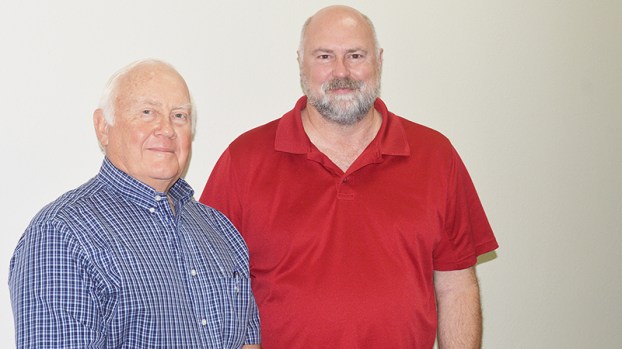 Horace Brown, left, serves as the director of education for Associated Builders and Contractors in Nederland. Kenneth Wahl, right, is the training coordinator for ABC. (Stephen Hemelt/The News)

NEDERLAND — The question posed to Ben Stafford was simple.

“What are the job opportunities for people in our area?”

Stafford, as dean of workforce and continuing education at Lamar State College Port Arthur, was uniquely qualified to answer.

His response leaves little doubt about the question of opportunity.

“We are sitting through the Spindletop of our generation,” Stafford said. “The college has been working with Golden Pass since 2015 to prepare for the workforce that we are about to see needed on that project. Then with Sempra since 2018. The Golden Pass project and the Sempra LNG project are each $10 billion projects. They are each considered one of the biggest industrial projects in the world at this time. And they are both in Port Arthur, Texas.

Golden Pass LNG is in the early stages of building a $10 billion, liquefied natural gas export facility near Sabine Pass.

Golden Pass expects to support about 19,000 construction jobs during the project. At its peak, it will have 7,000 workers on site.

Sempra is leading the Port Arthur LNG project, which is expected to include two liquefaction trains, up to three LNG storage tanks and associated facilities that will enable the export of 11 million tonnes per annum, or Mtpa, of LNG.

The company has said the project would involve some 3,500 engineering and construction workers. 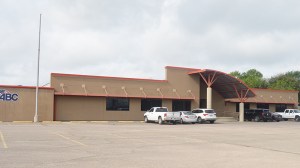 Associated Builders and Contractors is located at 2700 North Twin City Highway in Nederland.

Many people will need training for those jobs, and with more than 30 years of experience doing just that, Associated Builders & Contractors (ABC) in Nederland is ready for such a demand.

ABC has been training generations of craftspeople in disciplines such as pipe fitters, welders, electricians, scaffold builders and carpenters.

Their classes start at the basic level of introductory construction and proceed into various advanced fields.

ABC operates through four quarters of training each calendar year, with classes offered at night so those with fulltime jobs can maintain employment while furthering their skills and certification levels.

Horace Brown has served as director of education at ABC for a decade.

“Our mission is to develop a well-trained community of craftspeople in whatever crafts are needed,” he said. “We teach about nine different crafts, all basically industrial. Some of them can overlap into the commercial/residential areas.” 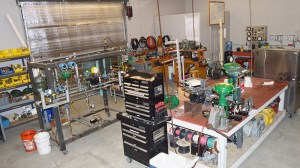 Tools, real-world environments and hands-on training are the bedrocks at Associated Builders and Contractors.

He said demand for the positions flucatates from year to year but ABC officials see the need for at least 5,000 skilled workers in the next four to five years — “the demand is going to be there soon.”

“Our intent, obviously, is when someone finishes they are trained enough to get an entry-level or just above an entry-level job in their craft or crafts,” he said. “We have a number of students who actually do multiple crafts so they can broaden their skill base.”

“The more we can do that, the better off we are,” Brown said. “In the past three or four years, we’ve partnered with Lamar Port Arthur to offer support classes. We’ve also partnered with a group in Beaumont, Creative Corrections Education Foundation, which is a group that tries to get people with a criminal background to change their lives. We work closely with them in getting the people they recommend for referral trained with new skill sets.” 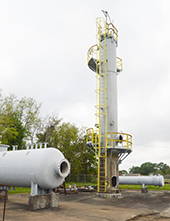 A tower on the Associated Builders and Contractors campus provides a unique opportunity for students to put their instruction into practical use.

He partners with ABC to send students and instructors to the school during the daytime to get trained. The partnership is nearly a half-decade old and impacts many students each year.

“(Our students) love it, and it is very good, very high caliber,” Stafford said. “It allows our students the benefit to continue on.

“I only have the time to get students through whatever their craft is, level 1 or perhaps level 2. The people who pay me, Texas Unemployment and things like that, will only pay enough to get a person the job and get them in the door. Since my training goes on at the ABC and my students are aware of it, they are perfectly placed once they get a job to just keep coming to the ABC at night and improve their skills so they can get their next promotion. It’s a very good arrangement.”

Marsha Rivera is program administrator at Creative Corrections Education Foundation. She seeks out anyone on probation or parole, past or present, to qualify for workforce training at ABC.

She has seen numerous clients pursue careers in welding, pipefitting, electrical, industrial carpentry and scaffold building who had no previous experience.

“If they never had a trade in their life, I actually recommend they take something smaller like scaffold builder or carpentry,” she said.

“I think it is going real well. I think the information is getting out to the public at a great extent. I believe (the clients are benefiting) because I had one gentleman who did not know how to read. They told him to pay attention real close in the class and he was taken out of class and asked the questions and he would answer. With the program, you don’t have to have a GED or high school diploma to take the class. 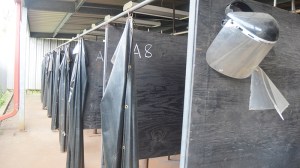 There are dozens of welding booths at Associated Builders and Contractors for hands-on training.

Tuition at Associated Builders & Contractors is $425 per semester, which includes the cost of manuals.

There are passing and attendance standards, with class schedules generally twice a week from 6 to 9 p.m. Mondays and Wednesdays or Tuesdays and Thursdays.

Approximately 350 students go through each quarter.

Port Arthur Mayor Thurman Bartie issued a simple request Friday to churchgoers and other congregants of the city’s houses of... read more